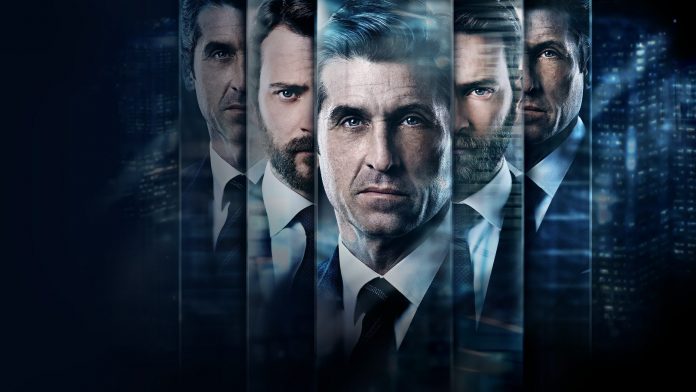 Wondering what to stream on these long nights in? Try these new series, movies and documentaries from Showmax. There are Hollywood highlights, some British gems and top local fare to keep you warm inside.

Fantasy drama Motherland: Fort Salem is set in an alternate America where witches ended their persecution by cutting a deal with the government to fight for the country. The series follows three young women as they fight terrorist threats with supernatural tactics. First on Showmax. Binge now »

When God (Steve Buscemi) plans to destroy the Earth, two low-level angels (Daniel Radcliffe and Geraldine Viswanathan from Bad Education) must convince their boss to save humanity. They bet him they can pull off their most impossible miracle yet: help two humans fall in love. The funny series scored 81% on Rotten Tomatoes. First on Showmax. Binge now »

Patrick Dempsey (McDreamy in Grey’s Anatomy) stars alongside Italian star Alessandro Borghi in this pacy thriller that exposes the dark world of millionaire bankers.
The series centres on Massimo Ruggero, a charismatic Italian banker who’s a shoo-in for a big promotion. But when his ﬁercest rival turns up dead, Massimo finds himself under suspicion and uncovers a vast political game plan orchestrated by the devils who rule the world’s financial fate. First on Showmax. Binge now »

The latest seasons of this brilliantly written, frequently bizarre stop-motion comedy come first to Showmax. Literally hundreds of Hollywood’s top talent have featured, from Seth MacFarlane to Patrick Stewart. Also, watch the special based on The Walking Dead, Look Who is Walking Now. First on Showmax. . Binge now »

It’s adapt or die as the struggle for power becomes a fight for survival in the new season of Billions. Alliances crumble as Bobby Axelrod (Damian Lewis) and Chuck Rhoades (Paul Giamatti) go head to head once more.
Season 5 ushers in a new threat to Axe’s rule in the form of social impact pioneer Mike Prince, while Julianna Margulies (The Good Wife joins the cast. Streaming on the same day as M-Net on Tuesdays from 9 June »

HBO’s Betty follows a diverse group of young women navigating their lives through New York’s predominantly male-oriented skateboarding scene. It has a 93% critics’ rating on Rotten Tomatoes, where the critics consensus is, “Earnest, audacious, and effortlessly cool, Betty captures the spirit of skating and friendship with style.” Streaming on the same day as M-Net on Mondays from 22 June »

Jack Malik is a small-time singer-songwriter in an English coastal town who’s facing the reality that his dream probably isn’t going anywhere. Then there’s a mysterious global blackout, Jack gets hit by a bus, and wakes up to find that The Beatles never existed… Streaming from 8 June »

Despite winning 16 international awards, this highly controversial movie is banned in Kenya, its native country. Two women defy convention to choose a different path for themselves, putting themselves in serious danger. This movie has 94% critics’ rating on Rotten Tomatoes, with Variety calling it, “Impossible not to celebrate”. Streaming from 8 June »

You know that time you messed up in a relationship and got your heart broken? Well, what if you could go back and fix it? What if, like teen genius Stillman, you had a time machine, that would give you all the do-overs you needed to get it right? This comedy drama with a sci-fi twist stars Asa Butterfield and Game of Thrones’ Sansa Stark, Sophie Turner. Streaming from 11 June »

Unbelievably based on actual events, Blackkklansman is, as the opening titles tell us, “some fo’ real shit.” It tells the story of Ron Stallworth, Colorado Springs’ first African-American detective, who attempts to infiltrate the local Ku Klux Klan in the 1970s … with the help of a Jewish stand-in.
The film has a 96% critics rating on Rotten Tomatoes. “There’s real, expressive joy in its anger,” says Los Angeles Times. Streaming from 25 June »

After Truth – Disinformation and the cost of Fake News

This brand-new HBO documentary looks into the ongoing threat caused by the phenomenon of “fake news” in the US, focusing on the real-life consequences of disinformation campaigns, conspiracy theories and false stories that spread on social media.
Released in March this year, it has a 100% critics rating on Rotten Tomatoes, with Variety calling it, “An absorbing and impressively researched documentary.” First on Showmax. Watch now »

Having survived their meddling parents’ attempts to break them up in the 2017 hit movie  Keeping Up with the Kandasamys, Jodi (Mishqah Parthiepal) and Prishen (Madushan Singh) are headed down the aisle at last. It’s going to be the wedding of the year! If they can survive their respective mothers.Watch from 4 June »

Honours student Kittie (Carla Smith from Binnelanders) is bewildered to be diagnosed with Hodgkin’s disease and given just months to live. She has things to do – and she’s not about to allow illness to stop her. This heartwarming and hope-filled kykNET miniseries is based on creator Elanie Rupping’s own battle with cancer. Binge from 4 June »

How to Train Your Dragon: The Hidden World

Inseparable besties Hiccup and Toothless are back for their final adventure. Chief Hiccup and Astrid have created a utopia for dragons and vikings alike, but now a new danger, in the form of a hired tyrant named Grimmel, threatens everything they love, just as they make a magical discovery that raises the stakes higher than ever.
Rolling Stone says, “Dazzling animation, light-on-its-feet humour and a ton of heart bring the ‘Dragon’ trilogy to a thrilling end.” Watch from 22 June »

The Secret Life of Pets 2

The fur’s going to fly as our favourite Jack Russell, Max, and his friends face brand-new adventures. With a new baby in the house, the ever-protective Max’s neuroses land him in pet therapy, until he finds a mentor in the form of Welsh Sheepdog Rooster (voiced by Harrison Ford).
Both Guardian and Variety say it’s even better than the first movie, with Variety praising its “stronger sentiments and higher hijinks”. Watch from 29 June »

Sign up for Showmax mobile and get access to the full catalogue on one mobile device for R49PM.
Until the end of June, get three months’ access to Showmax standard for R149 – that’s a 50% discount on the usual price of R99 per month.

New customers get a 14-day free trial and then pay R99 per month.
DStv Premium subscribers get Showmax free – go to showmax.com to sign up. DStv Compact and Compact Plus subscribers pay just R49pm per month – and new subscribers get their second month free if they sign up before 30 June 2020.