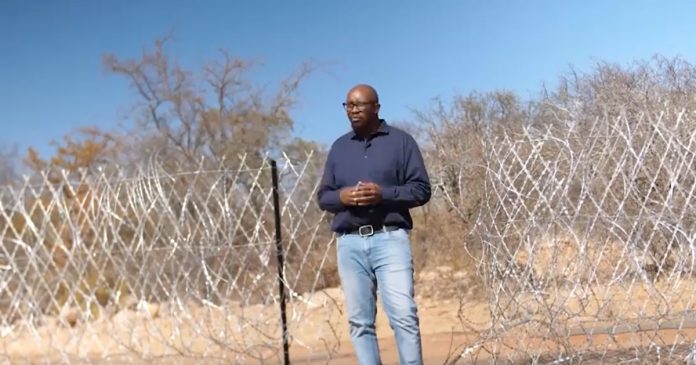 This Sunday South Africa’s top current affairs show Carte Blanche investigates if the R37-million fence between South Africa and Zimbabwe that the SA Government built is really doing its job to curb the smugglers.

As the lockdown of national borders was meant to curb the movement of people and spread of COVID-19, the Department of Public Works and Infrastructure awarded a tender worth R37 million in emergency procurement processes to fix the notoriously porous border fence between SA and Zimbabwe.

Not only has Parliament’s public accounts watchdog SCOPA cried foul and launched an investigation, it seems the revamped fence is not serving its purpose and is being vandalised as fast as it was built!

Carte Blanche travels to Limpopo to inspect matters up close.

Presenter Macfarlane Moleli says: “Government has built a R37-million fence to curb the movement of people and smugglers during lockdown. But is it really doing its job and was the fence truly worth the millions when a simple pair of pliers is all that’s needed to make it to the other side?” (Producer: Nicky Troll | Researcher: Laura Byrne)

You can watch the show on Sunday 21 June in South Africa on DStv Now or stream it overseas in most countries from Tues 23  June if you’re abroad.

Lockdown was meant to see our borders shut down to restrict movement and the spread of COVID-19. But despite the Department of Public Works and Infrastructure awarding a R37-million tender to fix the Beitbridge border fence, it seems to have been for naught. That's Carte Blanche this Sunday at 7pm on M-Net, DStv channel 101, and again at 8pm on M-Net Plus 1 channel 901. You can also stream the show live on the DStv Now app from 7pm.

Cutting-Edge Tech on the COVID-19 Frontline

While the hunt for safe and effective COVID-19 treatments continues, space-age technologies, including artificial intelligence, are being harnessed for the firepower they could bring to the fight against the pandemic. At one of the world’s most sophisticated research facilities in the United Kingdom, Carte Blanche meets inventors who work with pure light, billions of times brighter than the sun, to produce x-rays that help identify weak spots in the structure of SARS-CoV-2. By crowdsourcing submissions from scientists around the world, they hope to come up with the building blocks for a new drug that will be able to combat the virus at its weakest point.  Could this cutting-edge tech be the ultimate gamechanger? (Producer & Presenter: John Webb | Researcher: Laura Byrne)

With scientists joining forces around the globe to find a treatment for #COVID_19, one collaboration sees the use of intense beams of light to investigate the structure and properties of molecules to help design better drugs. @journojohn reports this Sunday on #CarteBlanche. pic.twitter.com/HzTnyzDG8u

Illegal Electricity Connections and the Battleground for Power

Illegally connecting to the power grid isn’t just irresponsible, it’s also downright dangerous. But this hasn’t stopped millions of desperate people living in informal settlements from paying a small fee to so-called Izinyoka to be provided illegal electricity.  Around the country, exposed live wires threaten the lives of these residents – just one wrong step could end with someone being electrocuted. Now, as winter sets in, Eskom says it’s taking strain forcing it to cut power in some areas. Carte Blanche heads to the City of eThekwini to examine this decades-long battle against illegal connections. (Producer: Nicky Troll | Presenter: Macfarlane Moleli)

A TRICK OF THE IMAGINATION   – A Dangerous Illusion

Illusionists are accustomed to creating clever tricks to fool a captivated audience. So, with a bow and arrow in hand, two South African magicians were simply meant to perform their dangerous new illusion, then walk away to resounding applause. But then something went horribly wrong, almost killing one of the illusionists. He survived. Now the duo is taking their death-defying act to the world. (Producer: Tarryn Crossman | Presenter: Derek Watts)

Two local #magicians, a bow and arrow and a dangerous illusion. The illusionist survived, but they vowed never to perform the trick again… that is until a top British talent show came calling. @DerekWatts meets the remarkable duo this Sunday at 7pm on #CarteBlanche. pic.twitter.com/GOy17wyxZE