The Gauteng Health Department says it will be instituting a disciplinary action against a staff member involved in the swapping of newly born babies at Tambo Memorial Hospital in Boksburg, South Africa, last month.

The department said the two babies, a boy and a girl, were born on 24 July 2020. According to the department, the baby’s girl mother realised around 9pm when she changed the baby’s napkin that it was not her baby as she delivered a baby girl, and she instead had a baby boy.

“The department finds this incident regrettable. The hospital concedes that the identification of babies and procedure for discharge was not properly followed,” Department spokesperson Kwara Kekana said in a statement issued on Thursday.

Kekana said the hospital has reached out to both families to resolve the matter; both mothers were interviewed by the Sister in Charge and the Head of Department, and they have also received counselling.

“The matter was immediately referred to the social worker to facilitate DNA testing of the babies at the request of one of the fathers. The DNA test took place on 4 August 2020. Both babies are currently admitted at Tambo Memorial Hospital whilst awaiting the DNA results,” Kekana explained.

Kekana said the hospital will continue to engage both families, as part of the redress process. – SAnews.gov.za 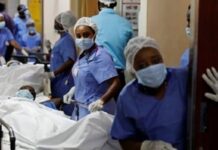