It’s the South African song that’s taken the world by storm – Master KG’s Jerusalema, featuring Nomcebo Zikode – with groups of people from Australia to Brazil, Denmark to Dubai – taking on the Jerusalema dance challenge… but probably nobody does it better than these kids! The Masaka Kids Africana have proved again, they have all the best moves!

The kids, who live at an orphanage in Masaka, Uganda, are not new to success – they have over 1 million subscribers on YouTube! Here’s their version of Jerusalema which has already been liked by over 450,000 people on Facebook in two weeks… along with 230,000 shares and 12 million views!

The Masaka Kids Africana Orphanage is made up of amazing, talented kids who’ve all tragically lost one or both parents through war, famine and disease. They are supported in education and social wellbeing with a philosophy to “dance, rise, and shine”. According to their Facebook page “they represent all the children of a continent and they demonstrate the potential of African children to become strong leaders for a better future in their land.”

Master KG’s South African dance track Jerusalema has attracted over 76 million views on YouTube, becoming the global soundtrack of the COVID-19 pandemic. Carte Blanche interviewed the Limpopo-born producer on Sunday evening. It’s currently streamed on Showmax International if you’re living abroad and would like to find out more.

While it’s made big news in SA, the priests in Italy dancing to Jerusalema, although fabulous, is fake – that video was filmed years ago to another track… and has just been dubbed over with Jerusalema. BUT anyway – nobody does the dance challenge better than kids. Here’s another one, posted by Delvin K a few months ago: 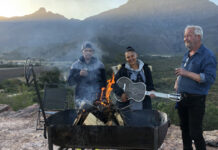