South Africa now has 627 041 cumulative cases of COVID-19 after 1 985 new infections were identified on Monday. This comes as the World Health Organisation (WHO) has warned that while people are experiencing pandemic fatigue, the COVID-19 pandemic is not over.

“At the same time, no country can just pretend the pandemic is over. The reality is that Coronavirus spreads easily. It can be fatal to people of all ages, and most people remain susceptible,” said WHO Director-General, Dr Tedros Ghebreyesus, on Monday.

The death toll in South Africa has jumped to 14 149 after 121 people succumbed to the respiratory disease. Of the additional fatalities, 24 were in the Western Cape, 23 in Limpopo, 20 in the Eastern Cape and Gauteng, respectively, and 16 in Free State. Three provinces recorded single-digit daily deaths – nine in the Northern Cape, eight in the North West and one in KwaZulu-Natal. 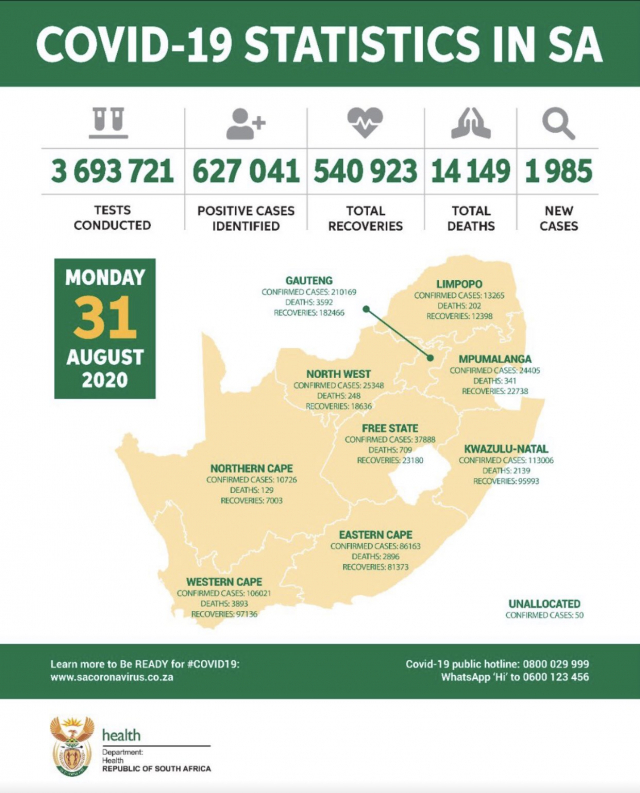 “We convey our condolences to the loved ones of the departed and thank the healthcare workers who treated the deceased,” Health Minister, Dr Zweli Mkhize, said.

“The number of recoveries currently stands at 540 923, which translates to a recovery rate of 86%,” Mkhize said.

On Monday, WHO published the first indicative survey on the impact of COVID-19 on health systems, based on 105 countries’ reports.

The information collected from five regions, from March to June 2020, illustrates that almost every country (90%) experienced disruption to its health services, with low- and middle-income countries experiencing the greatest difficulties.

WHO said most countries reported that many routine and elective services have been suspended, while critical care – such as cancer screening and treatment and HIV therapy – has seen high-risk interruptions in low-income countries.

“The survey shines a light on the cracks in our health systems, but it also serves to inform new strategies to improve healthcare provision during the pandemic and beyond,” WHO Director-General, Dr Tedros Adhanom Ghebreyesus, said.

He said COVID-19 should be a lesson to all countries that health is not an “either-or” equation.

“We must better prepare for emergencies but also keep investing in health systems that fully respond to people’s needs throughout the life course,” Ghebreyesus said. – SAnews.gov.za