On the first Saturday of September every year, International Vulture Awareness Day is celebrated – a time to not only reflect on the importance of vultures and the essential role they play in a healthy ecosystem, but also a time to spread awareness and take action… writes Chris Kelly, Species Director – Wildlife ACT

These misunderstood birds are extremely important members of an ecosystem – flying in from huge distances to pick decaying carcasses clean, thereby helping to prevent disease outbreaks. A world without vultures would be a foul-smelling place filled with disease and carcasses across our landscape. These species essentially help to maintain the functioning and health of an ecosystem.

Vultures are equipped with a digestive system that contains special acids that are able to dissolve anthrax, botulism and even cholera bacteria. The excess rotting carcasses can result in an increase of scavenging carnivores, both wild and feral, which lead to further consequences caused by an imbalance in the system and the spread of other harmful diseases like rabies.

“The importance of vultures to the ecosystem really cannot be overstated”, says Wildlife ACT Emergency Response Manager, PJ Roberts. “These critically endangered birds provide an incredible ‘clean-up service’ for the environment. Identifying carcasses from kilometers away, vultures swiftly move in and can finish a carcass in a matter of minutes. By vultures removing decomposing animals from the landscape, humans are ensured a clean environment free of carcass-borne diseases.”

Due to their unique habits, Vultures face a multitude of threats, which include direct and indirect poisoning, electrocutions and collisions with energy infrastructure, habitat loss, disturbance and the shortage of food. 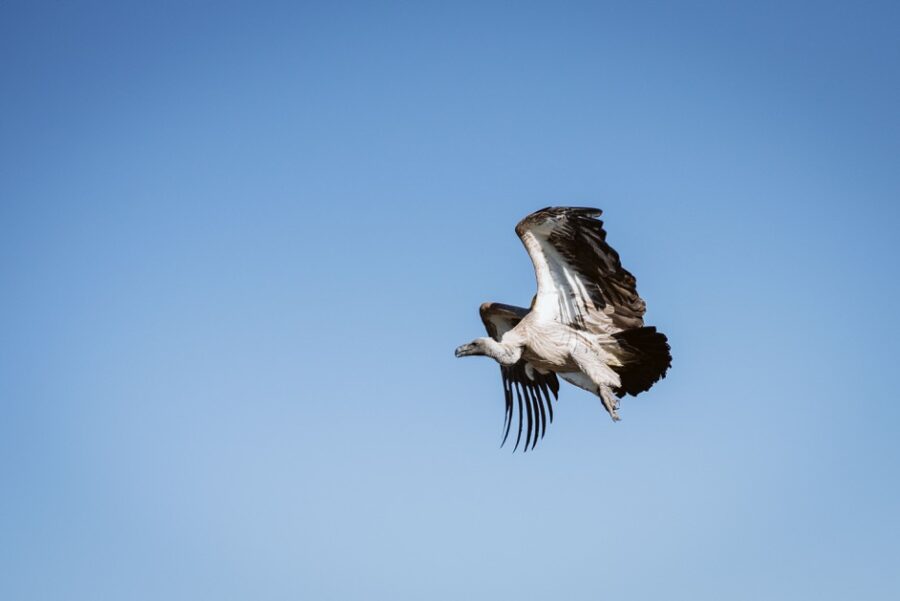 As a result of these ongoing threats, many vulture species are now only breeding within protected nature reserves and sightings are becoming more and more of a luxury. Of the five Savannah species found in South Africa, all are classified as either endangered or critically endangered. Current trends in important sub- populations of these species, such as in KwaZulu-Natal, are indicating that all breeding pairs of White-Headed Vultures and Lappet-Faced Vultures will be locally extinct within the next few years.

The Work Being Done to Save Vultures:

Wildlife ACT works closely with partners such as Ezemvelo KZN Wildlife, The Endangered Wildlife Trust, BirdLife SA and the National Department of Environment, Forestry and Fisheries to help protect vultures in South Africa.

To date, Wildlife ACT, together with our partners, have fitted over 65 vultures with GPS backpacks/trackers, tagged and sampled over 150 individuals, conducted 36 nest surveys, and successfully released 14 recovered birds.

The implementation of tracking equipment and monitoring protocols for vultures in Zululand, is also helping to discover new potential threats. With new information at hand, targeted outreach and educational initiatives will be implemented by Wildlife ACT and our partners to better understand the issue and help shed light on the critical importance of vultures. Recent poisoning incidents have also led to further dialogue with authorities and will help support the prosecution of those found in the illegal procession of vulture body parts.

Educating and creating awareness among local farmers and communities living near protected areas, as well as the wider public, also forms a huge part of our vulture conservation work. It needs to be understood that the vulture crisis could very well mean a human crisis. 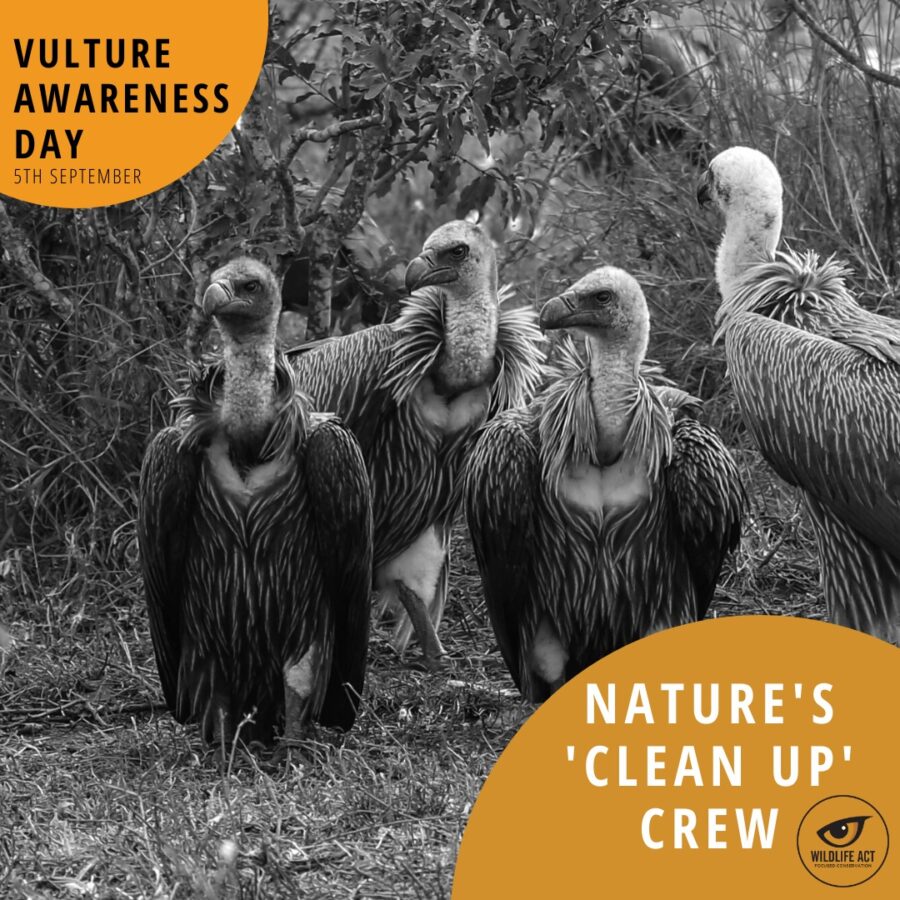 Vulture conservation is in desperate need of support and is heavily reliant on the public to help spread awareness and to fund the work being done to help save this ecologically-essential species. The technology used is expensive, and funding is needed to purchase more backpacks and other essential equipment.

Our Emergency Response Team of conservationists on the ground are the ones saving the lives of any poisoned vultures by rapidly responding to any poaching incidents. This requires fuel and equipment in order to operate effectively.

We also encourage the public to report any tagged vulture sightings in Southern Africa to Project Vulture at the following link: http://projectvulture.org.za/report-vulture-sighting/

If any tagged vulture is sighted, please record the identification number and species (if possible) along with the GPS (or physical) location and take a photograph of the bird with the ID tag displayed if at all possible.

“We also need help with changing perceptions around certain wildlife species. Like sharks and hyaenas, vultures are often stereotyped as the “bad guys”. But despite what humankind thinks of them, we need to acknowledge their importance and take a holistic approach in protecting vultures. To do this successfully, we need to take a collective stand to spread awareness, raise funds and report sightings to help protect these unique birds,” says Chris Kelly, Species Director, Wildlife ACT. 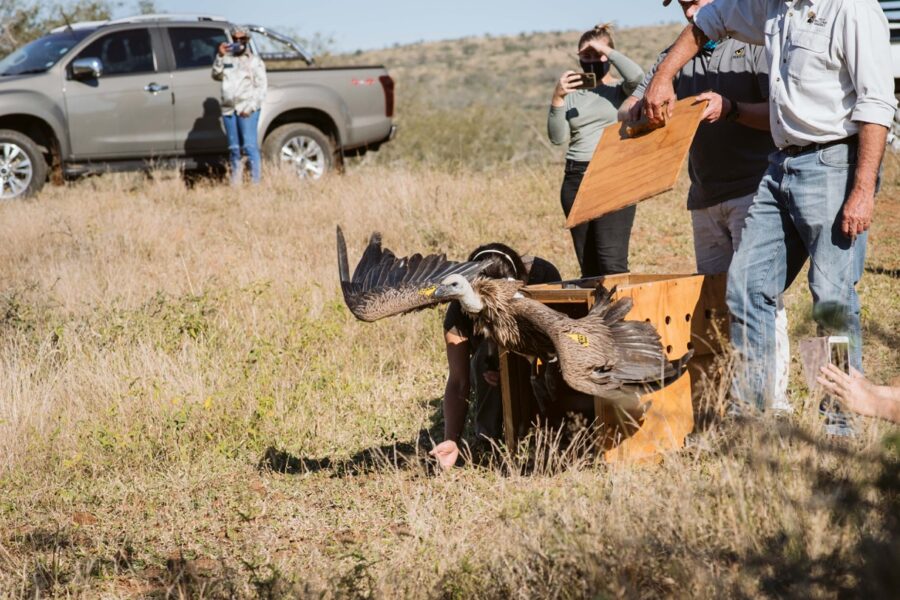 Towards the end of June 2020, a successful release of 3 critically endangered African
White-Backed Vultures took place on Manyoni Private Game Reserve. It took 6 to 9 months before this important release could take place, while the birds were being rehabilitated with Raptor Rescue Rehabilitation Centre, after a surge of vulture poisonings that occurred across Zululand at the end of 2019. These success stories are only possible through collaboration, fast action, and public support. Saving a species from extinction cannot be achieved alone.

Video by The Safari Media Co