South Africa has as of Wednesday recorded a staggering 17 710 new cases – bringing the country’s cumulative total of COVID-19 cases to 1 039 161, indicating a positivity rate of 33%. Several experts appeared on SABC this morning to discuss the status quo and the vaccine rollout. (Watch below.) 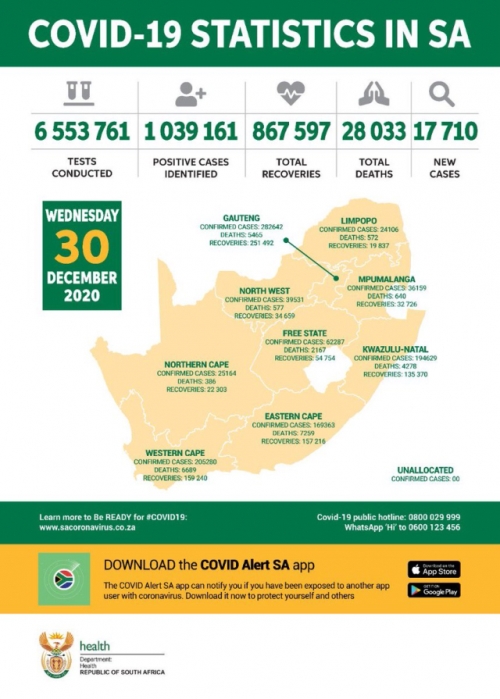 “The positivity rate, being an indicator of the rapidity of spread, remains of major concern,” said Health Minister, Dr Zwelini Mkhize.

“We convey our condolences to the loved ones of the departed and thank the health care workers who treated the deceased,” said the Minister.

Recoveries currently stand at 867 597 representing a recovery rate of 83%.

Public Health Lawyer Safura Abdool Karim said: “Many South Africans believe the vaccine is a silver bullet to ending this pandemic. That is not true. People need to adopt the NPI’s. The vaccine is not the solution in the short term. People need to take responsibility in controlling the epidemic.”

She said there are a lot of countries who started rolling out vaccines before Phase 3 approvals were granted.”These were granted through emergency use. We haven’t taken this route,” said Karim. “Our regulators are ensuring that any vaccine rolled out is comprehensively tested.”

Health Department Deputy Director General Anban Pillay said: “We have not delayed the procurement at all. We took a decision that we would go with the COVAX Facility rather than taking risks and going with one vaccine supplier. This is a safer mechanism and we are about 1 of 198 countries procuring.”

Top scientist and renowned virologist Prof Barry Schoub said: “Having a vaccine will not end an epidemic. I think it is a common misunderstanding that we need to clear out.”

Pillay said: “It is important we continue with non-pharmaceutical interventions like wearing masks and social distancing, particularly today on New Years Eve.”