Four suspects have been shot dead, and two rifles and a pistol have been recovered, by members of the South African Police Service (SAPS) following a foiled “cross-pavement robbery” at a filling station in the Bram Fischer area in Soweto, Johannesburg, South Africa.

SAPS said in a statement that an intelligence-driven multidisciplinary team – consisting of members from Crime Intelligence and the National Intervention Unit – yesterday responded to information received of a planned attack on a cash van.

The team of SAPS members noticed two suspicious-looking vehicles following the cash-in-transit vehicle into the filling station where security officials were to perform their daily duties of collecting money from the ATM.

Upon noticing the SAPS members, the two vehicles with a group of armed robbers made an about turn to escape, resulting in a high-speed chase.

Hot on their heels, the team followed the vehicles to an identified address in the area where a shootout ensued.

Four suspects were shot dead while other suspects fled the scene.

The National Commissioner of the SAPS, General Khehla Sitole, has hailed the vigilance of the joint team.

“The vigilance of this team ought to be commended for executing our mandate as the SAPS without fear or favour.

“This incident should send a stern warning to everyone involved in all forms of crime, especially violent crimes, to steer clear of breaking the law.

“We are hoping to apprehend the remaining suspects who managed to flee the scene with the implementation of the 72-hour activation plan to mobilise all resources,” Sitole said.

The possibility of linking these suspects to a spate of violent crimes, including the recent Cash-In-Transit heists in and around Gauteng cannot be ruled out, said SAPS.

Cash in transit heist ‘head blown off’ headlines in SA 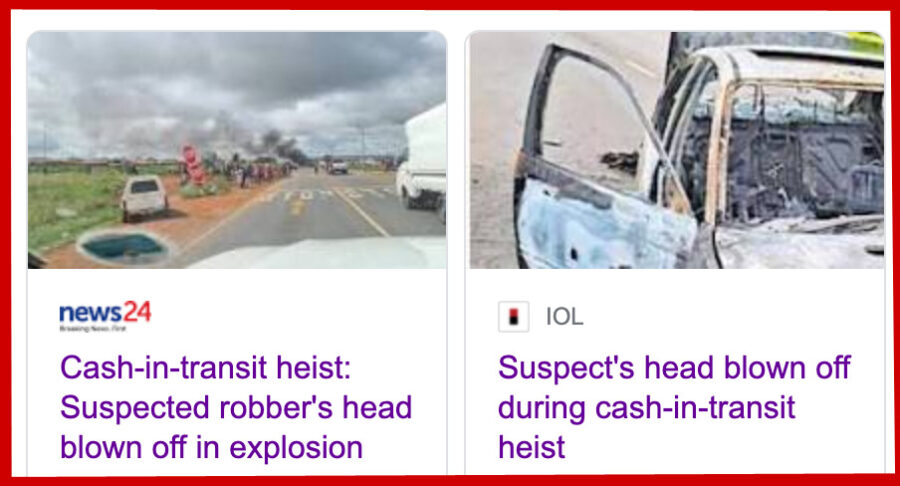 On Wednesday there were headlines in South Africa about a suspected cash-in-transit robber whose head was blown off in Randfontein on the West Rand. Police believe the robber had approached the G4S cash van to investigate why it hadn’t yet blown up… when it blew up. A burnt stolen vehicle was also found. A police spokesperson told The Star they have noticed an increasing trend in stolen or hijacked vehicles being used for cash-in-transit heists. “Of late, we are seeing a trend where the vehicles are being used to ram into the cash van to force it to come to a halt,” said Colonel Athlenda Mathe. “We are also warning members of the public against a tendency of the public to pick up money scattered at cash-in-transit crime scenes.” Sometimes the detonation of vehicles is delayed.

Sources include: SAPS and SAnews.gov.za