South Africa’s COVID-19 cases have risen to 1 356 716 after 9 780 patients were confirmed to have contracted the virus on Tuesday.

Meanwhile, 839 additional deaths were reported in the last 24 hours, which brings the tally to 38 288 since the outbreak.

According to Health Minister, Dr Zweli Mkhize, the high number of deaths is due to data reconciliation as part of the regular auditing process.

“This includes the analysis of community data taking into account amongst others, post mortem swabs, backlogged data and unconfirmed outcomes at facilities,” the Minister explained.

Of the latest fatalities, 234 occurred in Limpopo, 130 in the Western Cape and 102 in the Eastern Cape.

Forty-eight were recorded in Gauteng, 25 in the North West, 20 in Free State, 11 in Mpumalanga and two in the Northern Cape.

“We convey our condolences to the loved ones of the departed and thank the health care workers who treated these patients.”

In addition, 1 144 857 patients were healed from the respiratory disease, representing a recovery rate of 84%. 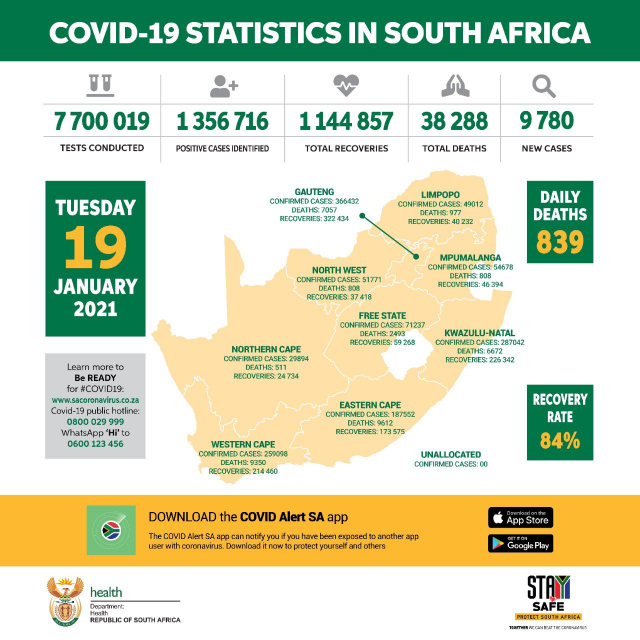 Global view of Covid cases around the world

According to the WHO’s weekly epidemiological update, 4.7 million new cases were reported in the past week, a decline of 6% from last week.

“At the same time, the number of new deaths has climbed to a record high at 93 000, a 9% increase from last week,” the agency said, adding that over 2 million people have now lost their lives to COVID-19.

“On the other hand, the Eastern Mediterranean, African, and Western Pacific regions reported increases in new cases, with the Western Pacific showing the largest increase of 14%.”

Meanwhile, according to the WHO, all regions reported increases in new deaths, while case incidence continues to be one of the primary drivers of mortality.

“Increases in the number of COVID-19 related hospitalisations and deaths follow large numbers of cases after a short time lag.”

Which countries have highest number of Covid cases?

In the past week, the five countries reporting the highest number of cases were: