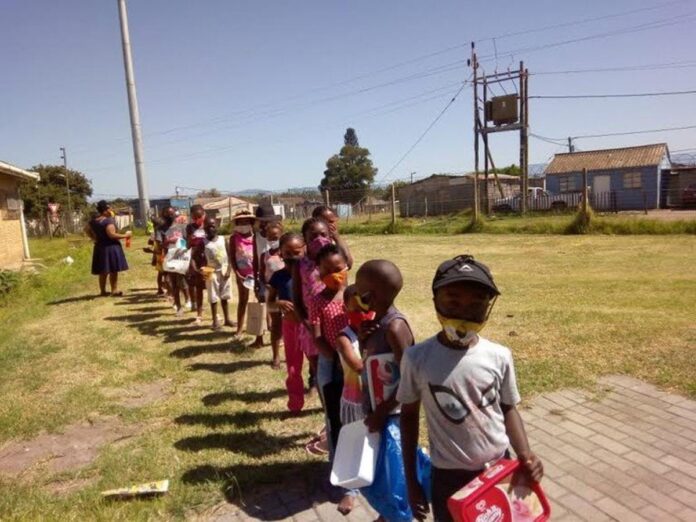 Dozens of learners come running when Phakamisani Primary School principal Xola Faku calls through a loudhailer, telling them their lunch has arrived. It is midday on Wednesday in the informal settlement of Qolweni, in Bitou, and for many learners at the school this is the only meal they have during the day.

Phakamisani Primary has been feeding hundreds of learners a couple of times a week during school holidays by taking food to learners who live too far to get to school. Over the festive season, the school provided food parcels to families, with pilchards, rice, mielie meal, and oil. They started doing this in April last year.

Phakamisani is one of over 1,000 schools in the Western Cape that are part of the National Schools Nutrition Programme. Opened in 1975 in Bossiesgef, in 1996 it moved to a new building in Kwa-Nokuthula. But many of the 1,300 learners come from very poor communities in Qolweni, Kurland, and Bossiesgef, using school transport to get to school.

“Some of the learners dropped out after their parents lost work and had to change cities or moved back to the villages because they can’t afford rent,“ said principal Faku.

Five full-time workers come to the school at 7:45am and prepare food for the learners. They first feed learners from the area, then phone Faku who takes them to Qolweni, Kurland, and Bossiesgef. He calls the learners who come running with their lunch boxes. Some parents come with their smaller children.

Faku said: “The school decided to transport the food to three different locations where our most vulnerable children are located because it is very far for them to come to school.” The Western Cape Education Department provides the food and pays the kitchen staff, but the petrol used to take the cooked food to the children is paid for by the teachers, says Faku.

The delivery service only takes place when school is closed.

Thembakazi Mahleza has been working in the kitchen for five months. She has a grandchild in grade 3 at the school. “I enjoy seeing children happy and playful after eating. The excitement we bring whenever we arrive at the kids makes me happy.”

“We pray for this initiative to be extended so we feed the kids every day of the week when schools are closed, as some kids depend on us for a meal a day,” said Mahleza.

“Even though other kids from the area who do not go to our school come for food too, the food never runs out. We always ensure that we bring enough and sometimes dish out for their parents if there is left-over food.”

Phakamisani Primary also has a vegetable garden, started in 2018, run by two volunteers. They grow spinach, cabbage, carrots and potatoes.

A 13-year-old boy in the queue, one of the Qolweni learners, says the meal provided is often the only meal he has during the day.

“I sometimes carry two skaftins (lunch boxes) for me and mother to share with my grandmother,” he says.

Kerry Mauchline, a spokesperson for education MEC Debbie Schafer, said the delivery of meals to Phakamisani learners was an initiative of the school governing body. “Unfortunately the Department does not have the mandate or budget to deliver meals to homes.”

Mauchline said the budget for the school nutrition programme in the Western Cape for 2020-21 was R412.5 million. “The Western Cape was the only province to feed learners during the hard lockdown, which we did not consider a ‘normal’ school holiday closure. We served over 1.6 million meals to learners in lockdown levels 4 and 5.