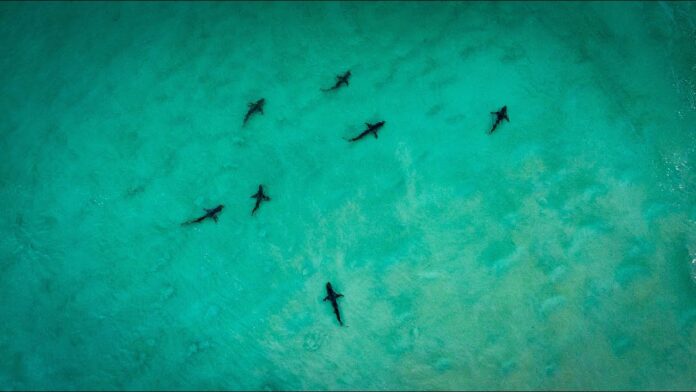 A drone video taken at popular Cape Town surf spot Kogel Bay – between Gordon’s Bay and Rooi Els – shows at least 10 or 11 bronze whaler sharks enjoying the water where the surfers usually hang out. Watch below.

The video was shot by local professional bodyboarder Iain Campbell, who says that it “was absolutely insane. We were able to see these sharks chasing fish and bait around the back of the line up that I am used to surfing every week.”

He added that “although this is scary, at the same time it is good to see the ocean life thriving during the times where we have seen a drop in shark activity in these part.”

According to SharkSider.com, Bronze Whaler Sharks prefer to hunt in groups and “despite its size and aggressive predatory behavior, they haven’t proven to be a real threat to humans. The only known fatal attack by a Bronze Whaler Shark is dated in September of 2011 and happened in Australia’s Bunker Bay.” Males can grow up to 2.3 metres.

Iain, who shares his videos – and life – with the rest of the world on a YouTube channel, also called on swimmers heading to the area to #BESHARKSMART as there are sharks frequenting the coast during summer.

He also explains the flags that all visitors to the beach should familiarise themselves with: