South Africa has achieved a proud milestone after over 10 million people have been tested for COVID-19 to date, the Health Minister, Dr Zweli Mkhize, announced.

According to the Minister, 24 594 people were tested on Wednesday, which pushes the total number to 10 020 025 since the outbreak.

Both KwaZulu-Natal and Gauteng recorded 25 fatalities each in the last 24 hours. In addition, 18 occurred in Free State, six in Mpumalanga, four in the Western Cape and one in the Eastern Cape, which pushes the death toll to 53 111.

“We convey our condolences to the loved ones of the departed and thank the healthcare workers who treated the deceased,” said Mkhize. 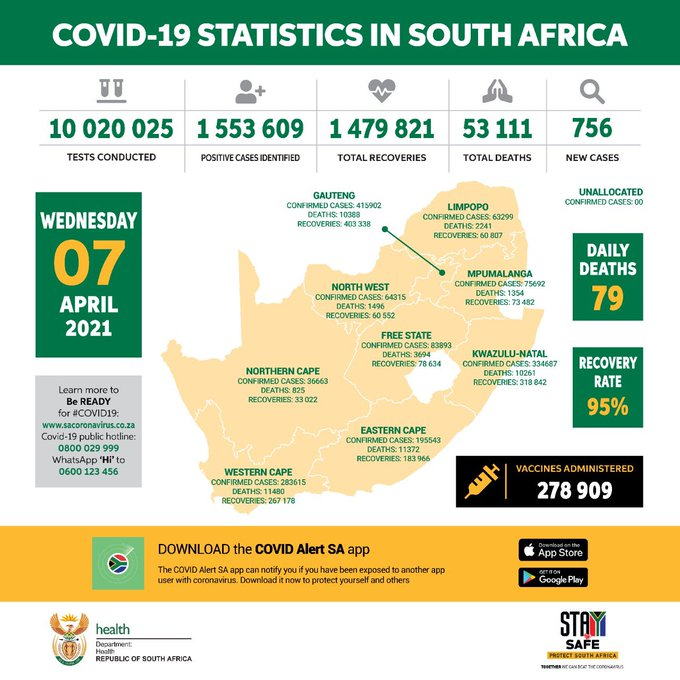 The Minister said the number of healthcare workers vaccinated under the Sisonke Protocol has now increased to 278 909 as of 7 April 2021.

Globally, new COVID-19 cases rose for a sixth consecutive week, with over four million new cases reported in the last week, according to the WHO’s weekly epidemiological update.

Meanwhile, the number of new deaths also peaked by 11% compared to last week, with over 71 000 new fatalities reported.

The largest increases in case incidence were observed in South-East Asia, most notably in India and the Western Pacific regions.

“All regions, except for the African region, reported increases in the number of deaths, with the largest increase of 46% from the South-East Asia region,” the WHO noted.