The burning of the University of Cape Town’s J.W. Jagger Library on 18 April could be one of South Africa’s greatest losses of memory.

Many of the most precious records housed at the building may have been protected at lower levels by the library’s fire doors, but huge collections of literature and records may have been destroyed.

Named for the bequest of John William Jagger, an England-born tycoon and politician, who once served as Minister of Railways and Harbour in the cabinet of Prime Minister Jan Smuts, the Jagger library and reading room is home to a number of prominent archival collections. This includes parts of the 65,000-volume-strong African Studies collection and the African Film collection. The library may include parts of UCT’s government publications archive, and the School Textbook Collection.

Ujala Satgoor, executive director of the University of Cape Town’s Libraries, confirmed in a statement that the Reading Room of the Jagger Library had been “completely gutted” (as can be seen in the photo above).

Satgoor said the fire shutters that had been installed to protect the library’s most precious collections had been activated, and the fire did not spread to other parts of the library. However, Satgoor confirmed the loss of some collections that could not have been spared the inferno. Satgoor asked for the public to “refrain from speculation and conjecture” about the extent of the library’s loss.

Jagger Library was the centre point for UCT’s special collections, and the sheer breadth and depth of these archives means that whatever may be salvaged, a great loss will be suffered.

The library holds diverse historical records from across society, from activist pamphlets to corporate minutes, original music manuscripts to graduate theses, many of them recording the voices of everyday South Africans that may be found nowhere else. A trove of material documenting the struggle for AIDS medicines is in the library.

UCT’s special collections and African studies collections are vast and varied. They include anti-apartheid work by Neville Alexander, IB Tabata, Ruth and Jack Simons, to the papers of Wilhelm Bleek, a linguist and ethnologist whose records of the San and Khoisan peoples are listed in Unesco’s Memory of the World Register.

The newspaper holdings in the library are rich, and include nearly-complete runs of Cape Town’s two major dailies, the Cape Argus (from 1857) and the Cape Times (from 1876), as well as newspapers in various South African languages, such as Imvo Zabantsundu — an Eastern Cape paper — and newspapers dating back to the nineteenth century,

The reading room also had a number of artworks, including Mawande ka Zenzile’s portraits of Samora Machel, Toussaint Louverture and Patrice Lumumba.

The lower parts of the special collections library, behind the fire doors, houses UCT’s collections of rare and specialist books, maps, personal papers of prominent people, and other archives.

The majority of the archives of architect Herbert Baker’s practice are in the library, as well as near priceless paintings, sculptures and San art.

UCT has been digitising parts of its collection, so hopefully this, together with the fireproof measures, will ensure much knowledge of value will live on. 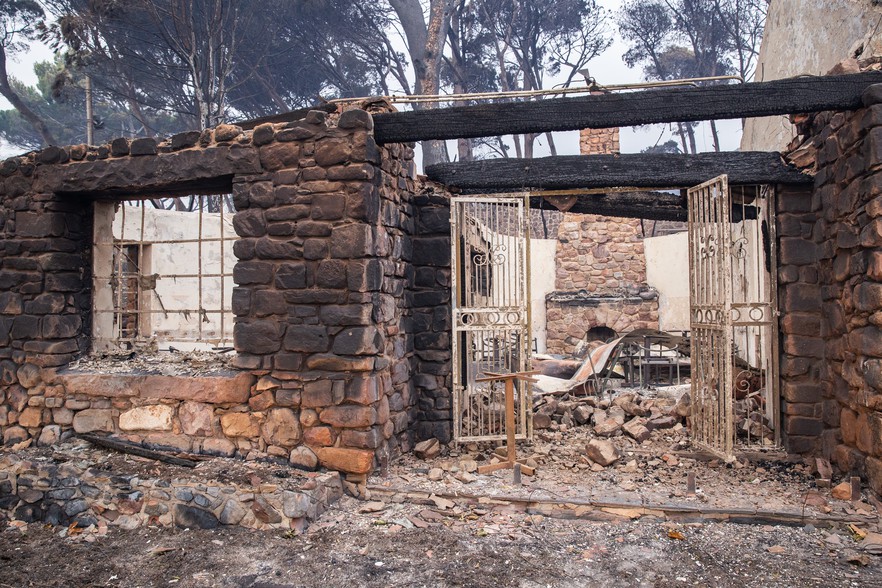 The stone restaurant, above, at Rhodes Memorial has been destroyed. Photo: Ashraf Hendricks 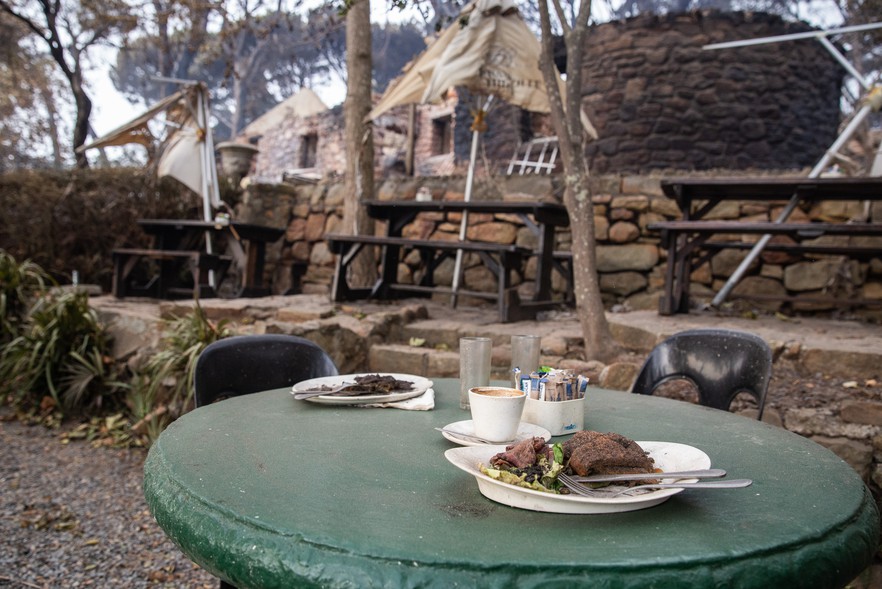 A meal is left unfinished at the deserted restaurant, which was surrounded by smoke and some still burning embers when GroundUp went to the site on Monday morning. Photo: Ashraf Hendricks 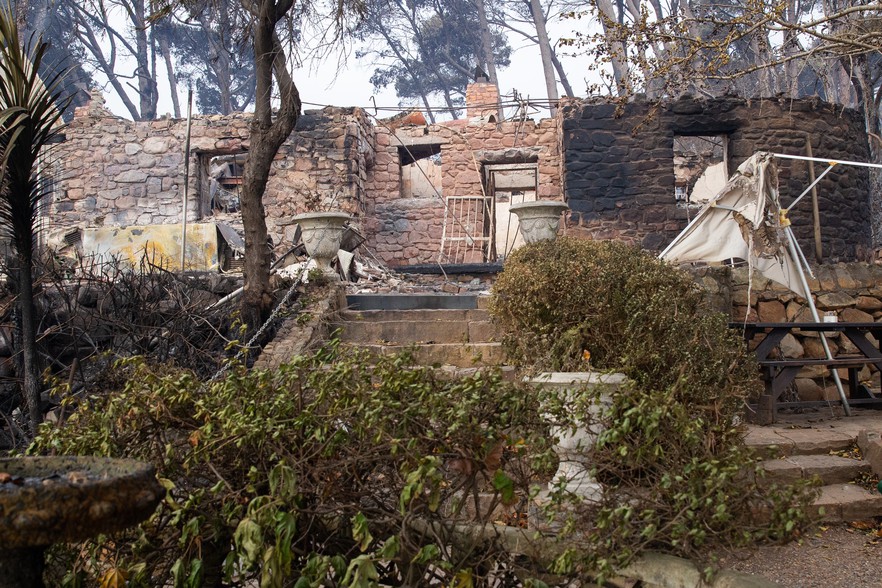 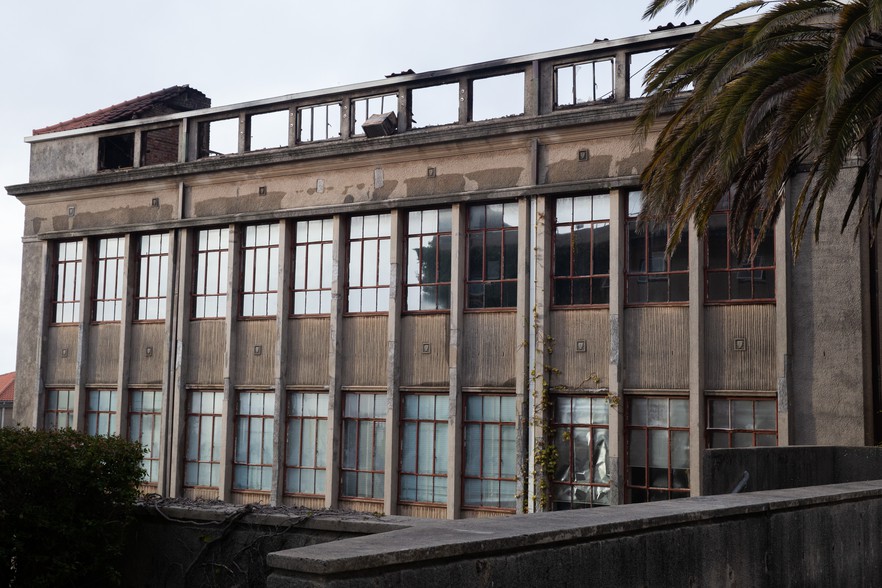 We saw water streaming down the H.W. Pearson building. The roof appeared to be destroyed by fire.

The building, named for the founder of Kirstenbosch National Botanical Gardens, is home to the Bolus Herbarium Library, and huge collections of samples. The Bolus Library is a specialist botanical collection containing, among other treasures, early botanical works from the 17th century, as well as “a comprehensive collection of modern literature relating to systematic and evolutionary botany, plant ecology, ecophysiology and conservation ecology”.

A senior UCT staff member tweeted that the Bolus herbarium and library are safe. 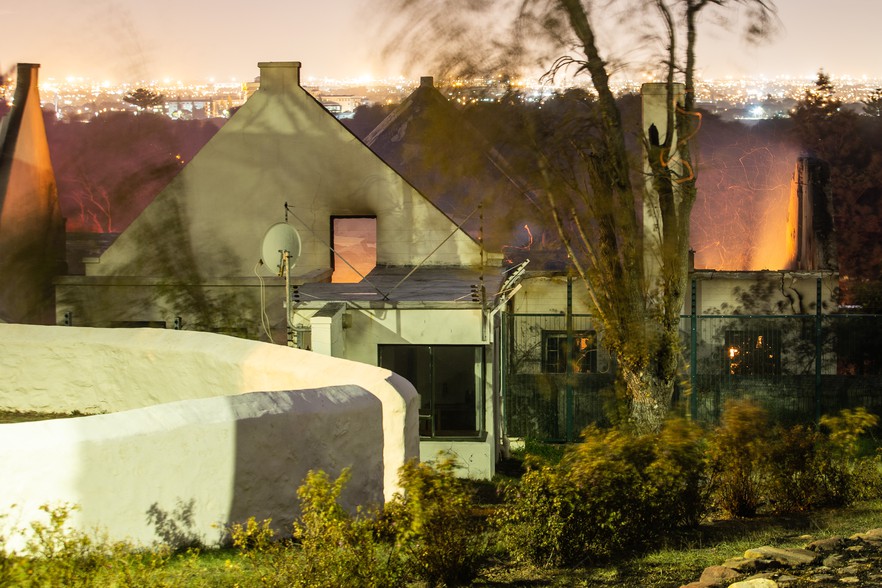 The building behind Mostert’s Mill was still on fire on Monday morning. Photo: Ashraf Hendricks 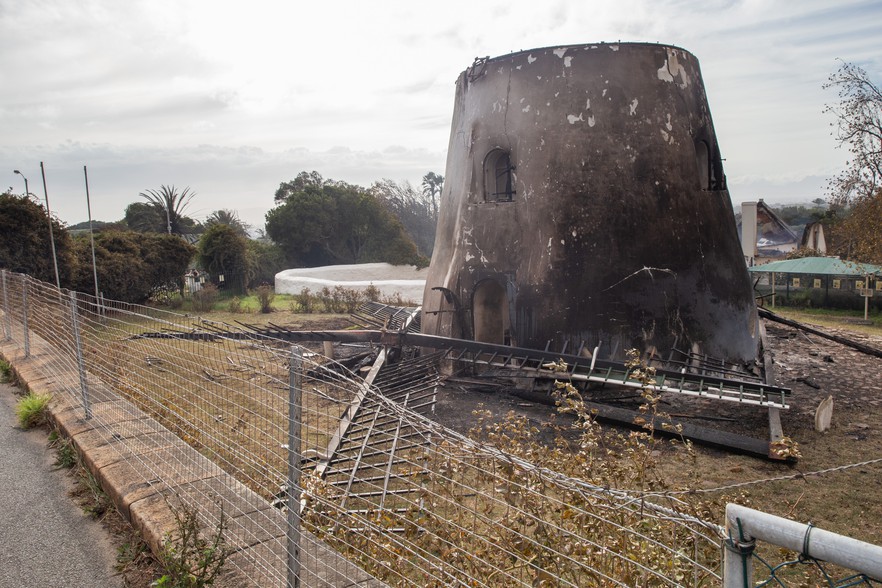 Mostert’s Mill, a familiar site to so many Capetonians, has been destroyed. The sail lies on the ground. Photo: Ashraf Hendricks

Mostert’s Mill was the oldest surviving windmill in South Africa. While Mostert’s Mill takes its name from Sybrand Mostert, it was his father-in-law, Gysbert van Reenen who led the building of the Mill in 1796 on the “Welgelegen” farm. This farm was later bought by Cecil Rhodes and bequeathed to the country on his death. By 1935 the mill had fallen into disrepair, and a Dutch millwrighting company – Dunning-Bremmer – was brought to fix it up, with renovations completed in 1936.

Decades later, the mill had again fallen prey to time’s decay and human inattention, and in March 1993 at the Mowbray Town hall meeting, the “Friends of Mostert’s Mill” was established to lead the renovation efforts. The same Dutch millwrighting company that undertook the 1935 renovations was hired, and the mill was brought back into full working order beginning in 1995. Since then, the mill has been open to the public once a month, weather permitting.

A member of the “Friends of Mostert’s Mill” told GroundUp that the fire would not bring an end to the mill, and that, “We will rebuild her from the ashes with everyone’s help.” 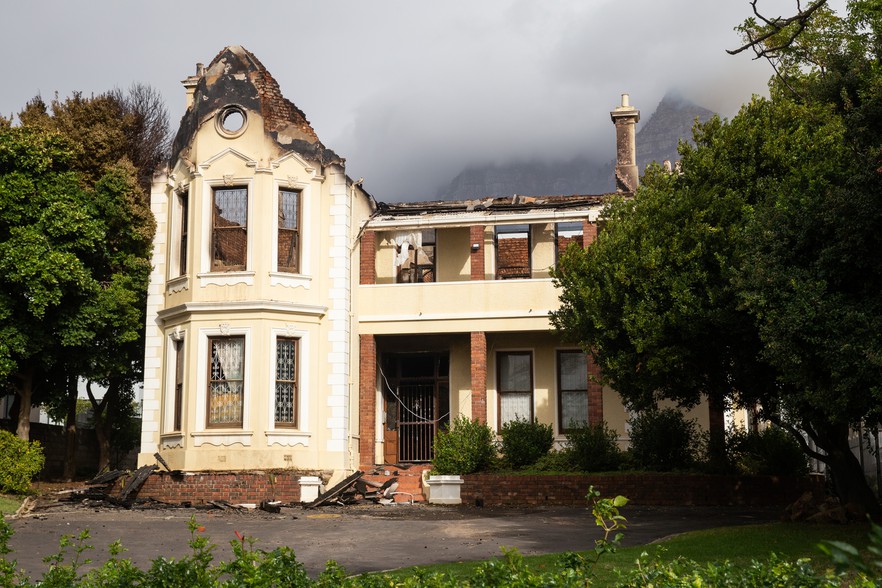 Cadboll House, which houses some of the university’s administrative functions was badly burnt. Photo: Ashraf Hendricks 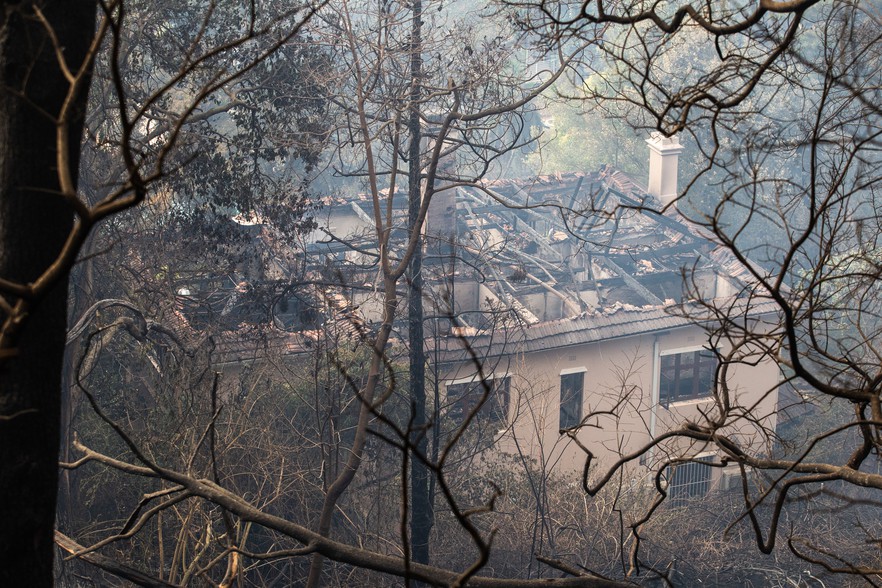 This building is just off the M3 on the opposite side of UCT, near the presidential residence. Photo: Ashraf Hendricks 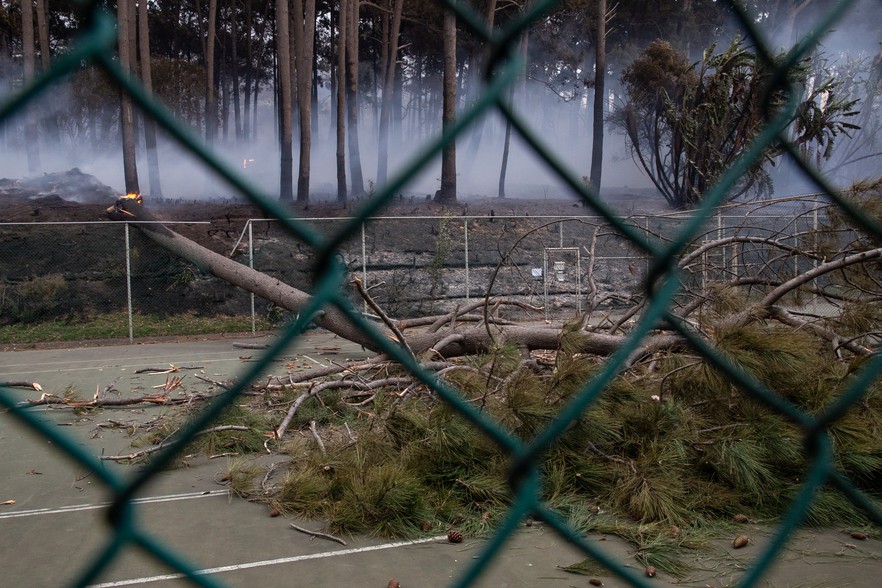 A tree lies on one of the UCT tennis courts. Behind it is the barren landscape left by the fire which raged across Devil’s Peak. Photo: Ashraf Hendricks 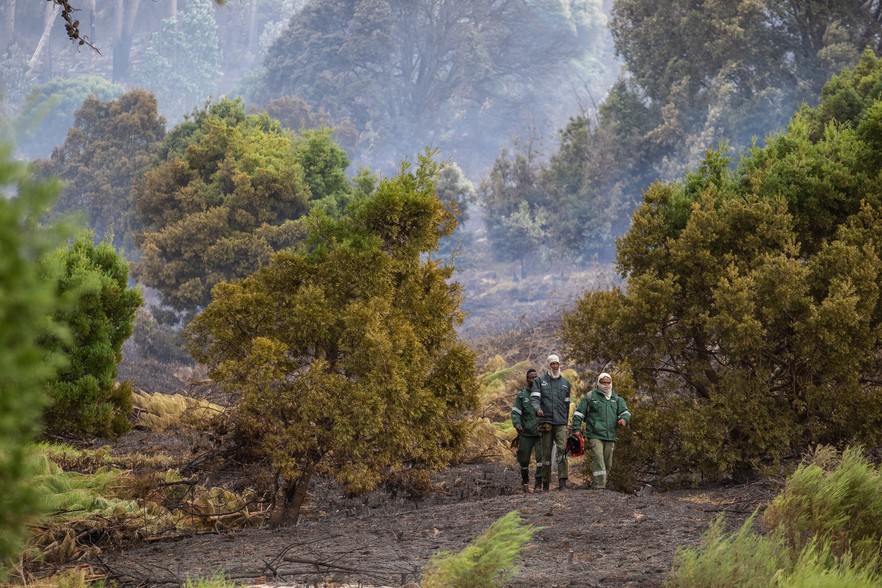 Firefighters emerge from the veld above UCT. Photo: Ashraf Hendricks

UPDATE ON 2021-04-19 13:34: A reader has pointed out that the mill at Oude Moulen may have a better claim to being South Africa’s oldest surviving windmill as it was built in 1782, and so predates Mostert’s Mill by 14 years. However the mill at Oude Moulen was converted into a chapel in 1928, while Mostert’s Mill remained as a mill, intermittently in operation, until the fire. And it will hopefully grind wheat again in the not too distant future.