Speaking during the first webinar in a five-part series, which will explore the importance of whistleblowing and the challenges that whistleblowers experience, Adv Mothibi said:

“More often, corruption goes undetected until a whistleblower comes out. To bring any successful litigation and prosecution, you need credible evidence, and evidence doesn’t just flow from nowhere.

“It’s given by people, and those people have to be assured that the framework of the witness protection and whistleblower protection functions, such that they are protected.”

Mothibi said the death of Gauteng Health Department Chief Director of Financial Accounting, Babita Deokaran (a whistle-blower in the PPE scandal), spurred the unit to raise awareness on the legal options that whistleblowers have in order to receive protection.

Deokaran was killed in an alleged hit after she exposed potential corruption within the department.

Mothibi explained that in the case of Personal Protective Equipment (PPE) corruption cases, for example, the SIU has ensured that those coming forward with information are not put in any danger.

“We’ve got an independent company that’s running our whistleblower hotline. We do that to ensure that there’s confidentiality [and] it is also to ensure that there is anonymity. Almost 90% to 95% of our PPE investigations are procurement based and that’s simply because that’s where all the money is,” said Adv Mothibi.

“More often, it is officials who become aware of this corruption and maladministration around procurement processes, and we have seen that officials do come out in many instances. Then it becomes very important that the… Protected Disclosures Act really kicks [in], so that those officials are protected.”

“It is so important for would-be witnesses and would-be whistleblowers to understand… the legal framework [to protect them]. But we as law enforcement agencies… are really geared up to ensuring that when matters and cases are reported to us, we put in place measures that will make sure that the whistleblowers and witnesses are protected.”

Mothibi acknowledged that both of these Acts needed to be broadened to include those who witness corrupt acts while not necessarily working for government. 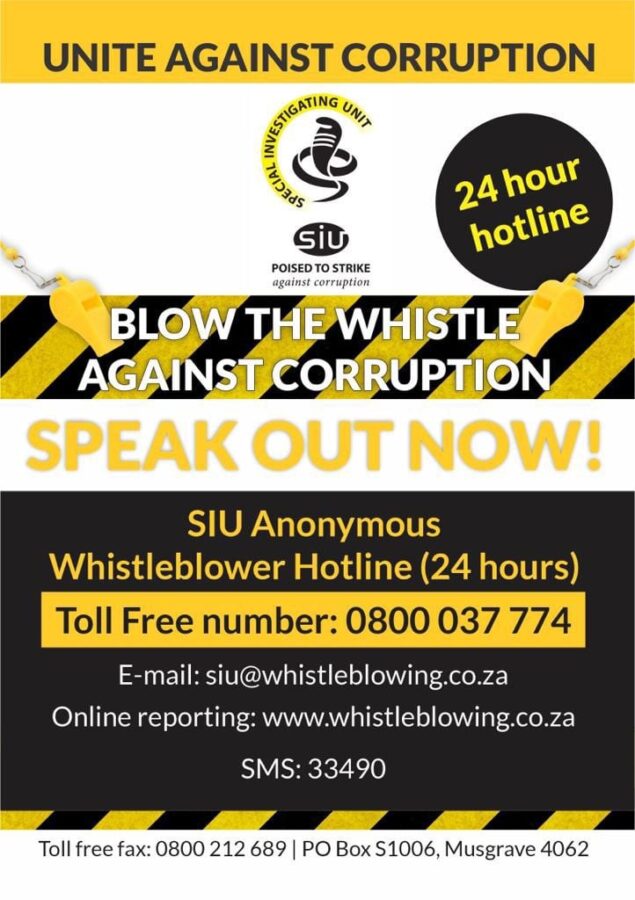 The SIU will hold the second whistleblowers webinar on October 3, which will unpack whistleblower legal frameworks and regulations. – SAnews.gov.za