KLERKSDORP, South Africa (Reuters) – South Africa’s largest private rhino breeder – John Hume – says he has kept the rhino on his farm safe from poachers for four and a half years but cannot continue if he is not allowed to sell their horns.

Rhino horn is used in traditional Chinese medicine and prized by some shallow elite as a status symbol in other parts of Asia, which makes poaching – which usually involves killing the protected species – a widespread problem. For that reason, international trade in rhino horn is banned.

Hume said cameras and radars have helped keep poachers away from his game park, where 200 rhino calves have been born each year since 2019.

But the 79-year-old former property developer said this has come at a cost of R5 million monthly, half spent on security and the rest on supplementary feeding and management, that he has paid for himself.

In January 2019, Hume issued an urgent appeal for help and for investors. But this month his office told Reuters that the enterprise still has no financial backers. The office said the project has had 54 months without poaching incidents… but that no investors had yet come on board because of the uncertainty over allowing permission for rhino horn sales.

Hume said his push for legal trade in live rhinos and horns to raise money for conservation had not succeeded.

“If my government helped me do that to help pay for this project, this project will thrive and get better and better with more and more rhinos,” he told Reuters TV.

“I am fearful because I cannot go on doing what I am doing forever.”

The environment ministry spokesperson was not immediately available for comment but a statement on the ministry’s website said international commercial trade of rhino horn remains prohibited under the Convention on the International Trade in Endangered Species of Wild Fauna and Flora (CITES).

In a 2016 debate in London between rhino rancher Hume and Born Free Foundation President and CEO Will Travers, Travers pointed out that both men share a desire for there to be lots of rhino in the world, but that he believes Hume’s push to legalise the sale of rhino horn will lead to more poaching. Travers said legalisation would increase the demand and that Hume’s “desire to open up trade is based on a series of dangerous assumptions about markets, prices and demand.”

Hume argued: “I beg of you, let’s end the war on the trade in rhino horn. It has only resulted in the killing of game rangers, poachers and the decimation of the rhino population.”

Many private rhino owners hold this view. They say that unlike elephant ivory and pangolin scales, rhino horns can be trimmed without injury to the animal. And by selling these horn, they say the proceeds can be spent on rhino protection and breeding programs.

Travers and other conservationists argue however that legal rhino horn will not magically replace illegal. “Poachers and criminals syndicates are entrepreneurs. They will take advantage of any opportunity to make money. If you’re selling it at 30,000 a kilo, they will sell it at 25.”

Most rhino poaching happens in SA’s state-owned game parks. During the first half of 2021, rhino poaching in South Africa rose by 50% compared to a year earlier when poaching plummeted due to COVID-19 restrictions. 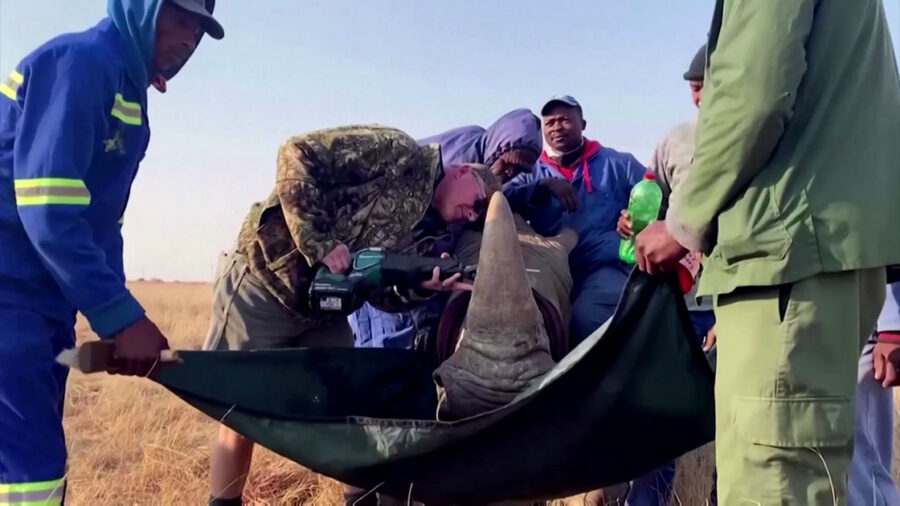 Some parks dehorn some or all of their rhinos to discourage poaching but it does not always stop the practice since parts of the horn remain and grow back.

WATCH South African rhino ranch keeps poachers away, but at a cost