Renowned bioinformatician, Professor Tulio de Oliveira, has issued a plea for billionaires and financial institutions to help Africa and South Africa control and extinguish worrisome variants… such as the B.1.1.529 variant, identified in South Africa, which was confirmed on Thursday, and which apparently has over 30 mutations (compared to Delta which only had two).

Prof de Oliveira – Director of CERI: Centre for Epidemic Response & innovation, South Africa – said on Thursday night in a series of tweets, together with diagrams:

“Busy day on B.1.1.529 – a variant of great concern – The world should provide support to South Africa and Africa and not discriminate or isolate it! By protecting and supporting it, we will protect the world! A plea for billionaires and financial institutions.

“We have been very transparent with scientific information. We identified, made data public, and raised the alarm as the infections are just increasing. We did this to protect our country and the world in spite of potentially suffering massive discrimination.

“This new variant is really worrisome at the mutational level. South Africa and Africa will need support (financially, public health, scientific) to control it so it does not spread in the world. Our poor and deprived population can not be in lockdown without financial support.

“This new variant, B.1.1.529 seems to spread very quick! In less than 2 weeks now dominates all infections following a devastating Delta wave in South Africa (Blue new variant, now at 75% of last genomes and soon to reach 100%). 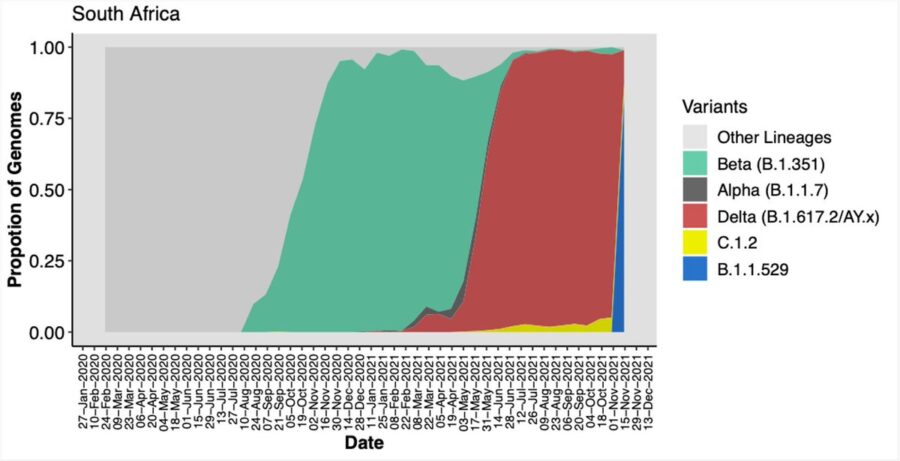 “Because this variant (B.1.1.529) can be detected by a normal qPCR due to deletion at Spike position 69-70 (like Alpha), it will make it easy for the world to track it. We estimate that 90% of the cases in Gauteng (at least 1000 a day are this variant, due to qPCR proxy testing).

“We are working around the clock to understand effects on 1) Transmissibility, 2) vaccines, 3) Re-infection, disease severity, and diagnostics. We do have funding for science, but South Africa and Africa need financial help to support their deprived population and health system.

“I would like to plea to all billionaires in this world @elonmusk @BillGates @JeffBezos @DrPatSoonShiong @WarrenBuffett to support Africa & South Africa financially to control and extinguish variants! By protecting its poor and oppressed population we will protect the world.

“I also want to plea to financial organizations @WorldBank @IMFNews @USAID @PEPFAR @GlobalFund to support the poor population and governments in South Africa and Africa to control and extinguish variants! By protecting its poor and oppressed population we will protect the world.”