A South African traveller, who flew from Cape Town via Germany, on his way to the Netherlands, has shared his unfortunate experience and offered some advice for others contemplating a trip to Europe. For obvious reasons he’d like to remain anonymous. We’ll call him Jannie.

Jannie told SAPeople he had been studying in the Netherlands, and now works there, but had applied to work remotely from South Africa for three weeks so that he could be with a relative who was nearing the end of his battle with cancer. Sadly his relative passed away before Jannie got to SA, but he still visited the country, working remotely, so that he could see family he hadn’t seen for almost 18 months.

All went well until Omicron arrived on the scene. The new variant meant he had to extend his stay by a week because Qatar cancelled his flights.

“I tried rebooking with KLM but it was too insanely expensive at the time, and (then I) managed to get this flight back via Munich” but there was chaos when he was only notified about his connection flight being cancelled when he arrived at Cape Town International Airport. He was rebooked on another flight and passengers were told they’d need to get tested on arrival in Munich. Here’s Jannie’s story, in his words:

“Houston, we got a problem over here in Munich 🙈 Day 1 of isolation: Jannie’s covid travel nightmare at Munich airport 😷

“After my 10 hour flight to Munich last night, every passenger on the Lufthansa flight from Cape Town was subjected to an additional nucleic acid test (aka rapid PCR test) in accordance with the amendment of the German Bayern law regarding AV-Test Detection that was implemented on the 26-11-2021.

“After disembarkation, we were boxed into group waiting areas to pass through the first checkpoint with the German border police for documentation checks. Following that, the border control to enter the Schengen state, directly after that, we encountered another checkpoint with border police to check where we were travelling to from Munich. Everything went smoothly, including showing my 24H negative PCR test results from South Africa at the above checkpoints.

“Following the lengthy process, we were then directed to the additional covid test area, which was a swab in the mouth 👅 and not the nose 👃. Once completed, we got a German sandwich and then had to wait around for 2 hours until our results were available.

“So this is where the nightmare got worse, I got my results, and it indicated that I was positive for covid (note that final PCR sequence results will be available in 7 days from now). 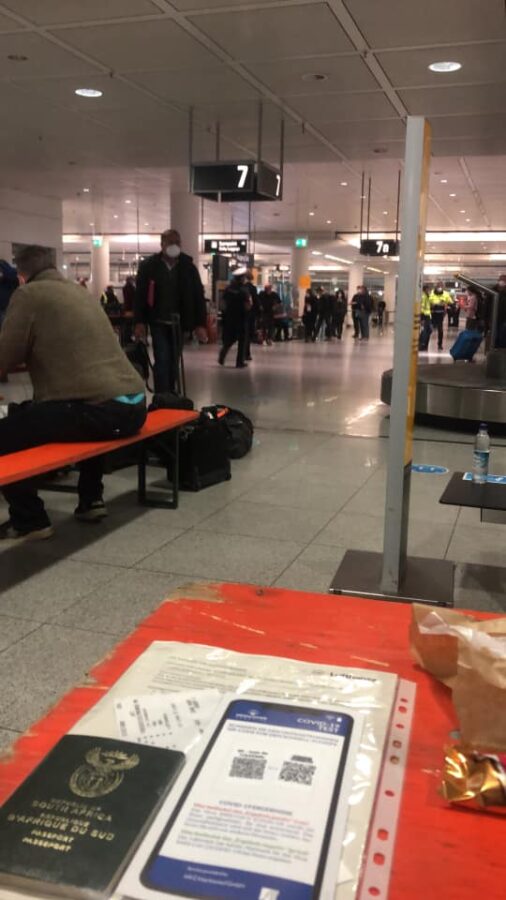 “My heart started racing as I could not grasp how this could be possible after doing two self-tests last week to make sure I was negative for my PCR on Thursday.

“My inner German came out and I tried to enquire if I could do a second PCR test last night with the German health authorities, but I was informed that it would be only possible after 13 days. Warum? Warum?

“Ever watched Border Patrol on Discovery? Well now this was my turn to experience it in reality… but in Germany. I was surrounded by four border control police officers and was escorted from the waiting area in the airport to the Hilton Hotel where I’ll be isolating for the next 14 days🎄 Funny enough, is that many of the positive individuals were South Africans returning to Europe (SAFFAS with valid resident permits) which raises a few questions on the validity of the quick results.

“But nevertheless, after this drama last night and my check in at the covid ‘prison’, guarded by German border police, I have accepted the situation and will need to just stay sane, carry on working remotely and keep myself in positive spirits until my release day on Christmas.

“I have no symptoms or complications as I am also boosted with the J&J.

“It is unfortunate that I’ll be missing my masters’ graduation ceremony next week in the Netherlands. 😭

“Lastly, to all my South African and European friends planning to travel back to Europe, please avoid flying via Munich as I would not wish this experience upon anyone else.
Much love ❤️
Jannie.”

Jannie told SAPeople he’s sharing his story to “give my South African and European friends a warning that Bavaria has its own rules and regulations for flights from South Africa”.

According to a press release on 9 December, from the German Embassy in Pretoria, “Germany has taken measures to restrict travel to Germany temporarily. The restrictive measures were taken against the background of the fourth Corona wave in Germany, which puts a serious strain on German hospitals and ICUs, and the spread of the new omicron variant in South Africa.”

German tourists may still travel to SA, and South Africans who are fully vaccinated and travelling for specific reasons may travel to Germany, but there are quarantine requirements for travellers entering Germany. The Germany Embassy adds: “Germany is grateful to South Africa for the excellent medical research and the transparency in dealing with the new variant” and “remains firmly committed to cooperate closely with South Africa in the joint fight against the pandemic, especially in the areas of vaccine production and extension of hospital bed facilities.”

Richard E. Grant feels quarantine in the UK is “punishing”

Meanwhile in the UK, eSwatini actor Richard E. Grant – who studied at the University of Cape Town – has kept his Twitter followers entertained with his complaints about quarantine in a hotel in London, which he says feels “punishing”. The 64-year-old has whinged bitterly about the “grim food” at the Gatwick Holiday Inn where he is being charged over £228 per night, having been forced into quarantine because of returning on a flight from South Africa which is on the UK’s Red List. He pointed out that a nearby non-quarantine Holiday Inn only charged £89, including breakfast.

The Withnail and I actor did have better news this afternoon, tweeting: “Just had confirmation that my 2nd Covid PCR test is negative. Positively levitating! Released from hotel quarantine in 36 hours. THANK YOU for all your messages of support over the last 10 days! 👌👏🚀\”