The Western Cape High Court has granted an urgent interim relief against the South African government’s controversial trophy hunting quota decision, which was announced in February. This means that no animal can be hunted until the matter is resolved.

The High Court granted the interim relief on Friday afternoon, pending the judgment of the interim interdict, against the DFFE’s 2022 hunting and export quotas for leopard, black rhino and elephants.

The application was brought by animal protection organisation Humane Society International/Africa (HSI/Africa), which asserts that the relief provided will offer an opportunity to fully review the Minister’s Record of Decision by which these quota allocations were made.

HSI/Africa argued that the Department of Forestry, Fisheries and the Environment’s (DFFE) failed to comply with the consultative process prescribed by the National Environmental Management: Biodiversity Act (NEMBA) 10 of 2004 when making the quota decision.

HSI/Africa, during proceedings, argued that the 2022 trophy hunting quota, as issued by the DFFE’s Minister Barbara Creecy, was unlawful for the following reasons:

In its 25 February 2022 press release, the DFFE argued that the hunting quotas allocated are based on the fact that “regulated and sustainable hunting is an important conservation tool in South Africa.”

However, HSI/Africa’s 2022 Trophy Hunting by the Numbers Report contradicts this argument, confirming that 83% of trophies exported from South Africa are from captive-bred animals, non-native species or species such as caracal, baboons and honey badgers that are not subject to scientifically based management plans. Also, only 25% of native species exported as trophies are managed with a national conservation plan. Hunting animals in these circumstances cannot be understood to advance the conservation of biodiversity.

This month, Good Governance Africa released a report, authored by Dr Ross Harvey, entitled “Trophy Hunting in South Africa: Is it worth it? An evaluation of South Africa’s policy decision to elevate trophy hunting as a key conservation tool”. The report asserts that “the government’s apparent commitment to trophy hunting neither considers the opportunity costs associated with the practice nor its negative externalities”.

Furthermore, it adds that whilst trophy hunting may generate some economic benefit, it is hardly enough to substantiate the overall harms that it does or to promote it as a conservation benefitting mechanism.

“HSI has long sought engagement with the Department regarding the harm that trophy hunting causes – the damage to individual animals and to the conservation of threatened and endangered wildlife, as well as South Africa’s reputation as an ethical wildlife destination. Today’s granting of interim relief, pending the final judgment of Part A, is another step in making these harms public and ensuring they are given the necessary consideration in wildlife policy. As Good Governance’s new report demonstrates, the economic and conservation benefits of trophy hunting are materially overstated. It is not true to assert that without trophy hunting revenues, conservation in South Africa would be unfunded. More beneficial, transformational, long-term alternatives to the killing of threatened, vulnerable and endangered animals for fun already exist. Everyone has the right to have the environment protected for the benefit of present and future generations, through reasonable legislative and other measures that promote conservation.”

HSI/Africa will now await the final judgment on the interim interdict, which is expected in two weeks.

The DFFE must make public the Minister’s Record of Decision that informed the quota announcement. Council will review all relevant documentation and a court will review the substantive matters basis of the quota of 10 vulnerable leopard, 150 endangered elephant and 10 critically endangered black rhinos in 2022. 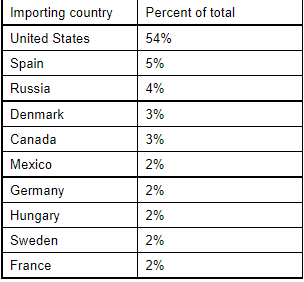