After the flames that gutted the Jagger Library at the University of Cape Town (UCT) on 18 April 2021 were finally extinguished, the archives were thought to be lost. The Reading Room, where researchers could study some of the rare African books available from the short-loans desk, had been completely destroyed. It was a devastating loss of archival material, much of it irreplaceable.

But in the days after the fire, the basements that housed the archives and parts of the African Studies collection were found to be undamaged, although in some areas they were waterlogged from efforts to douse the flames. (See photos at bottom of page.)

A monumental effort was undertaken to salvage what survived. In less than a month, 12,000 crates of books and archives were removed from the building. The damage on each individual item was assessed in a temporary triage tent set up outside the library.

Anti-fungal spray was used to prevent mould. To stabilise the materials, they were air-dried or frozen. A team of conservators almost immediately started work on restoring the items.

Now, 14 months later, at Maitland House in Mowbray, the painstaking process of rebuilding the collection is underway. Conservation work on rare books and valuable manuscripts is mostly happening off-site by a specialist team. Included in these are books almost 400 years old.

The UCT Special Collections had arguably the most valuable collection of African history documents in the world. It consisted of over 85,000 books and pamphlets on African studies, one of the largest collections of African films in the world (about 3,500 films), 24,000 items in the audiovisual archives, and 1,600 archival collections.

Among the audio-visual collections in the archives are the Community Media Trust HIV archives, containing hundreds of hours of HIV activism in the late 90s and early 2000s. These collections, mostly on tape and film, were being digitized.

It is still unclear how much survived the fire. As the archives are being sorted, partners and donors, some of whom still own the material, are being notified.

The process of sorting, cataloguing, restoring, and conserving the salvaged materials is expected to take several years. International consultants were needed to complement the local staff. The work is time-consuming, resource-heavy, and expensive.

UCT head archivist Michal Singer, who took GroundUp on a tour of the office building in Mowbray housing most of the salvaged items, cites as an example the Cologne city archives that took 12 years to reopen after its building collapsed.

Singer says they are under pressure from senior academics and researchers to complete the work or make parts of the collections accessible to researchers on demand. She says it is impractical to unpack crates for individual requests, although they are able to offer scan-and-email services for books that are back on the shelves.

Librarian Bev Angus came out of retirement to help rebuild the African films collection. She had previously been in charge of the collection. It involves digitizing VHS tapes and sourcing replacement copies from around the world.

Principal librarian Mandy Noble is in charge of rebuilding the collection of published works. She showed GroundUp the heap of crates in front of her office that she still needs to work through. Her desk is piled high with books she is working on. Books are catalogued, inspected, and then shelved.

Although much of the published collection is replaceable in theory, it is easier said than done. Many of the books are rare or are no longer in print. A large part of the collection was purchased with cash during travels throughout the African continent, and finding replacements for these are unlikely.

Meanwhile, the insurance claim for the collections has not yet been completed. Calculating the value of what was lost is complicated and challenging, UCT Libraries’ Executive Director Ujala Satgoor told GroundUp.

There is a silver lining, though. Noble showed us a storeroom with piles of donated African books from around the world. These include individual donors, as well as universities, including Stanford and Cambridge University Press.

Restoring the archives, which contain unpublished primary resources, is proving to be even more time-consuming. Unlike published collections, the archival material does not have barcodes and numbers, so traceability is a challenge.

“It’s like solving a massive puzzle,” Singer says. Crates taken from the Jagger building were numbered based on their position within the building. This has enabled Singer’s team to piece together what belongs to which archive. But there is also orphaned material, which was not correctly numbered during the salvage.

The majority of the salvaged material is still in crates. It is a slow and painstaking process: sifting through the materials, reordering, cataloguing, and putting them into new boxes. Some of the subcollections consist of hundreds of boxes.

Although water-damaged, much of Baker’s collection survived. Funded by a special grant from the National Institute for Humanities and Social Sciences, the drawings are being restored by a French consultancy team. During GroundUp’s visit, the team was setting up brand-new digitization equipment.

It is likely that the published collections will return to the Jagger building once it is rebuilt. But heritage buildings are not ideally suited for housing archives.

The fire has presented an opportunity to develop a centralised archive for UCT, Satgoor says. Before the fire, the archives were spread across four different sites across UCT’s various campuses.

The fire has also exposed the shortage of specialist skills needed for running archives of this nature, not only at UCT but in South Africa, Satgoor says.

There are now plans in the pipeline to establish a conservation unit for UCT that can service the UCT archives, and also offer services to other archival collections in South Africa.

PHOTOS FROM UCT LIBRARY – SAVING AND RESTORING THE BOOKS

All photos taken in May 2021 by a volunteer. 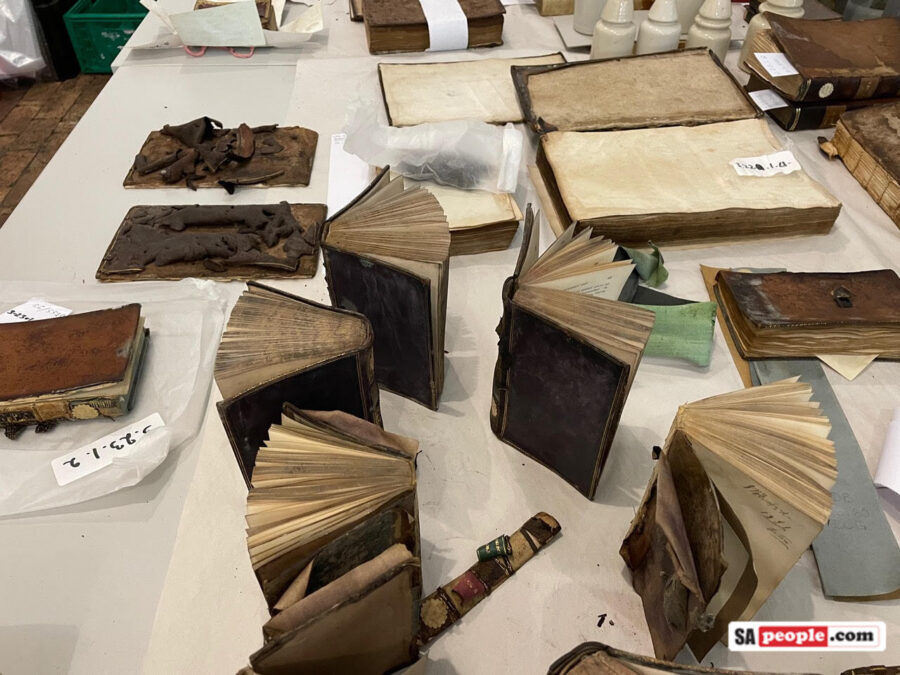 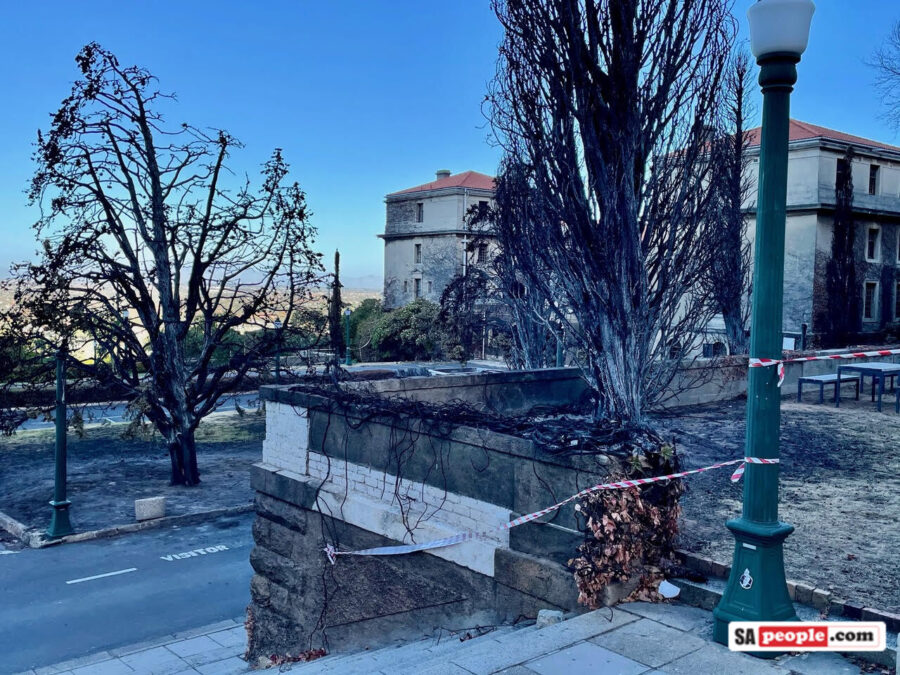 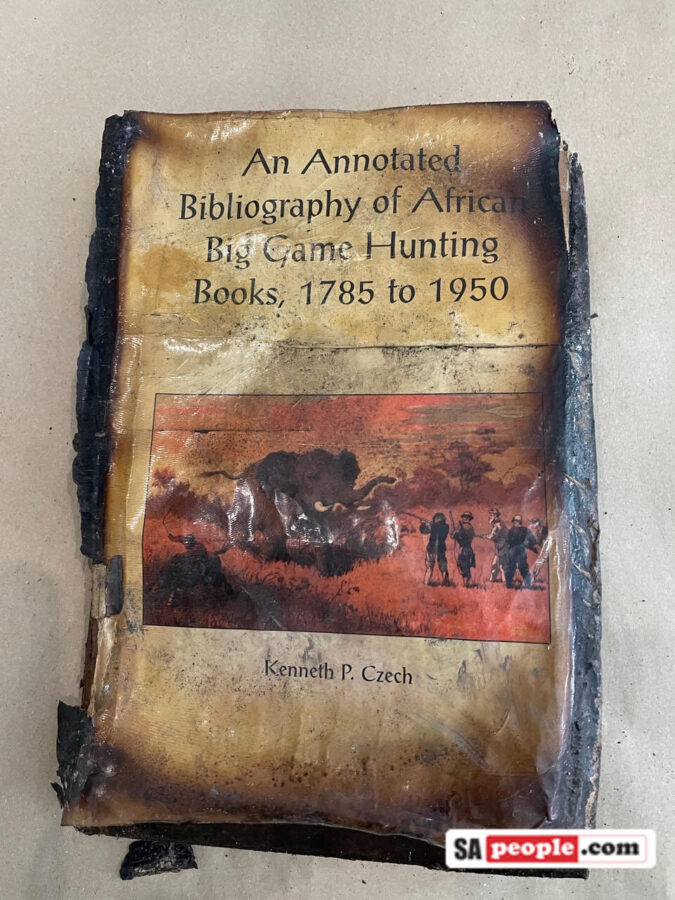 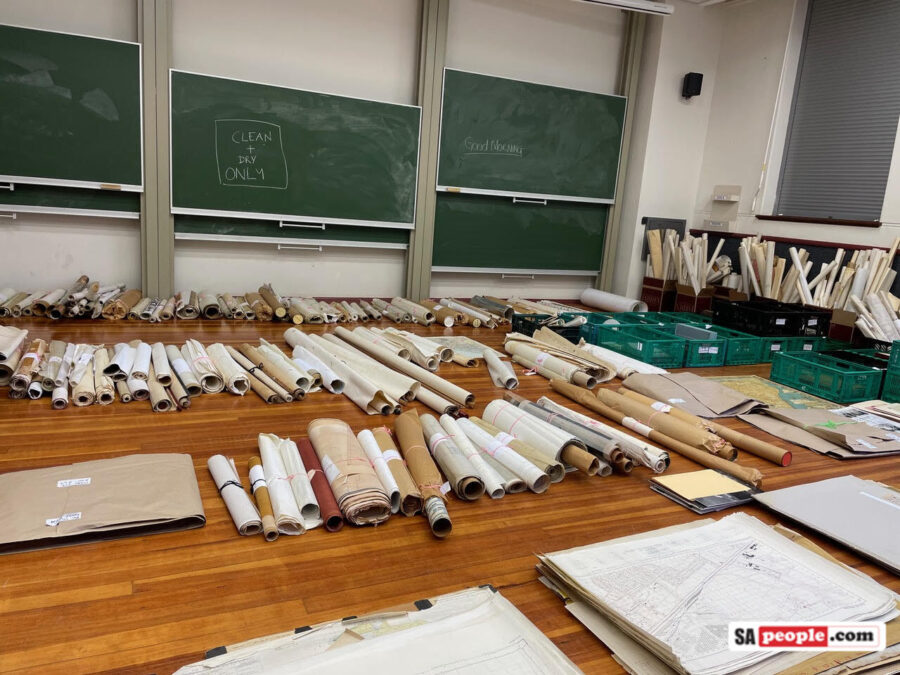 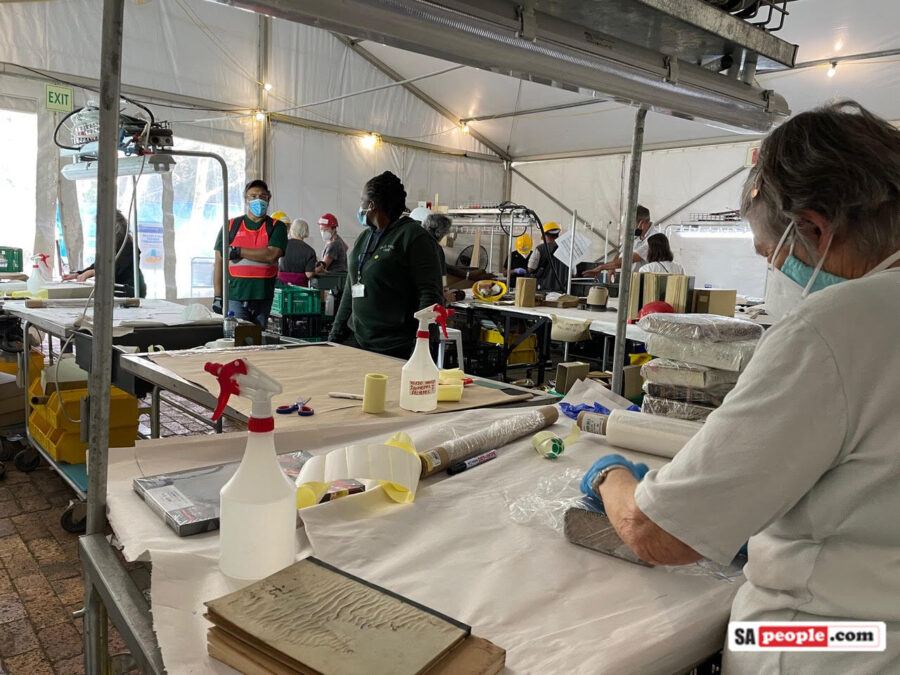 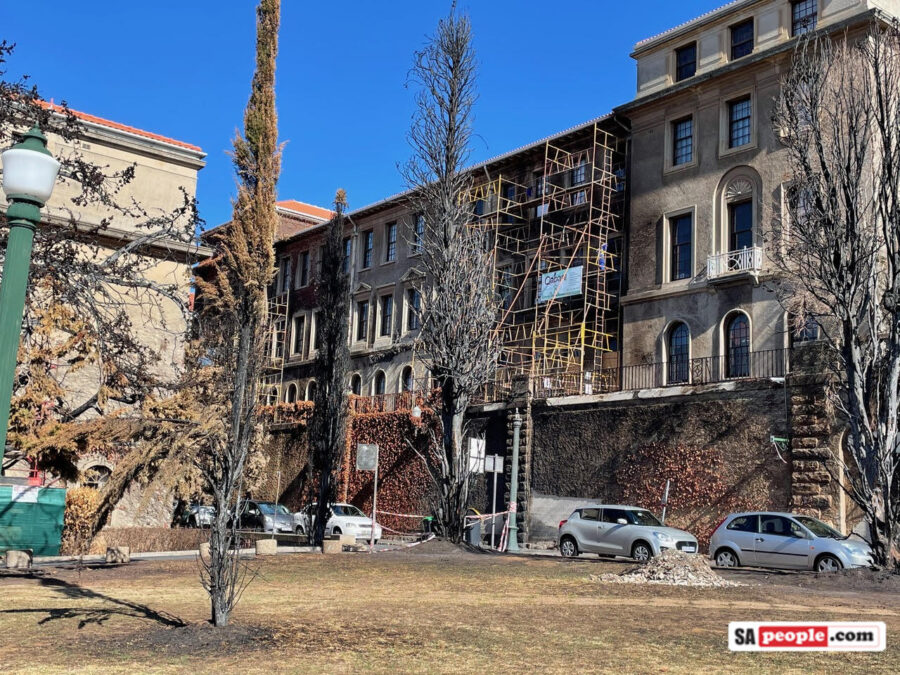 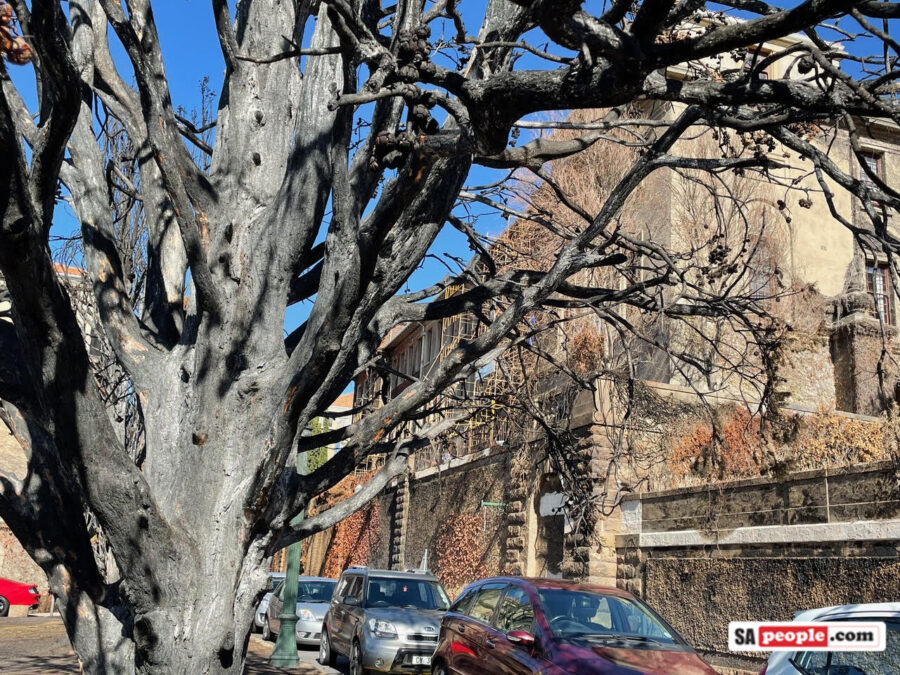 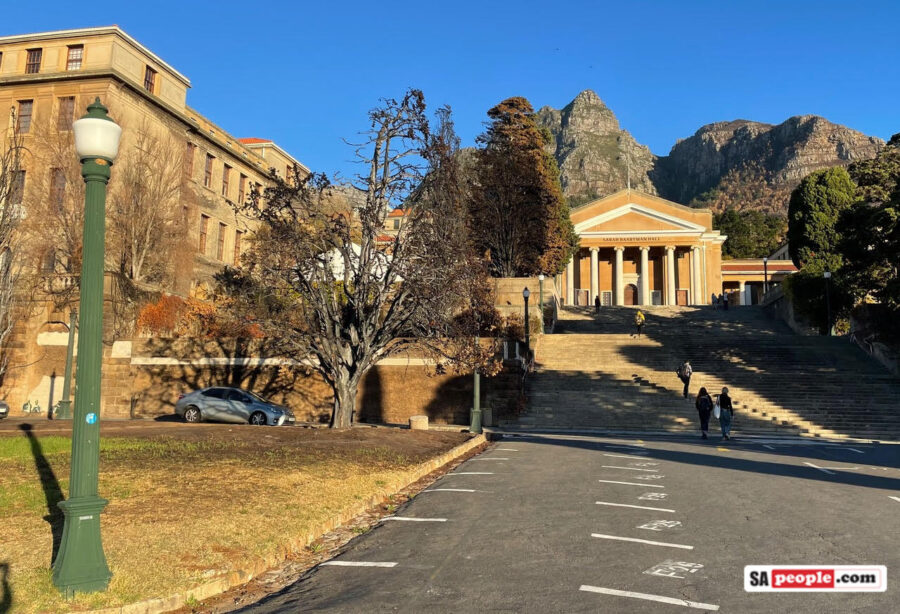 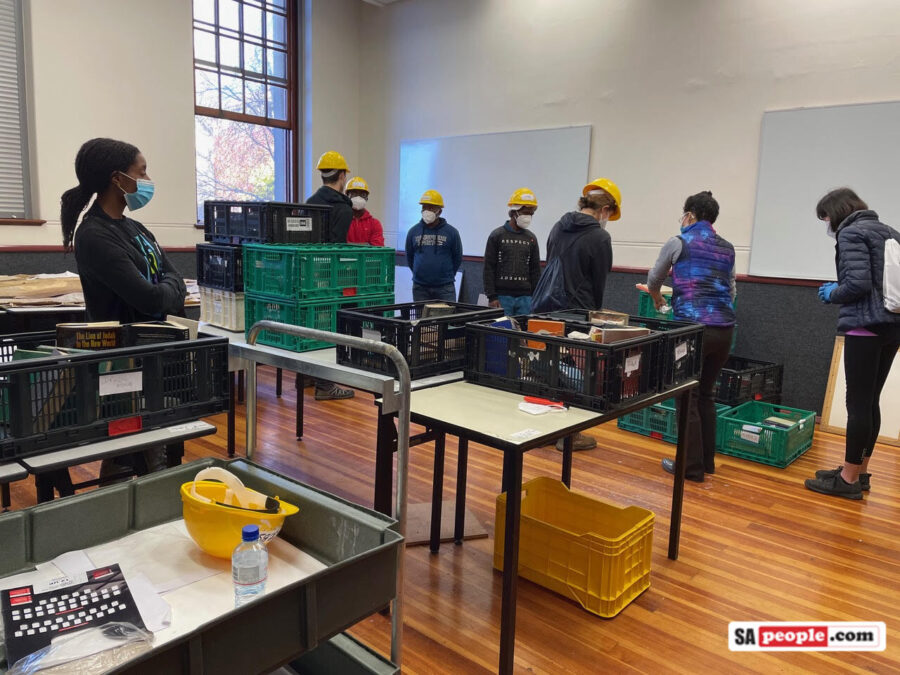