Before we delve in to why I take photographs of Johannesburg, I just want to explain a thing about photography. Many people often ask “do you edit your photos”? Of course I do, and whilst this is not a lecture on photography, I will keep it brief. Photos and text by ANTON BOSMAN.

Photographers can “shoot” in RAW or JPEG.
In the latter, the camera uses its own installed firmware to edit the image for you (enhancing colours, balancing out light etc…)
In RAW you get an untouched image, but it’s no different to making a casserole and dishing up all the raw ingredients.
A RAW image needs to be processed and what it does, it allows the photographer to have some leeway and to be creative. 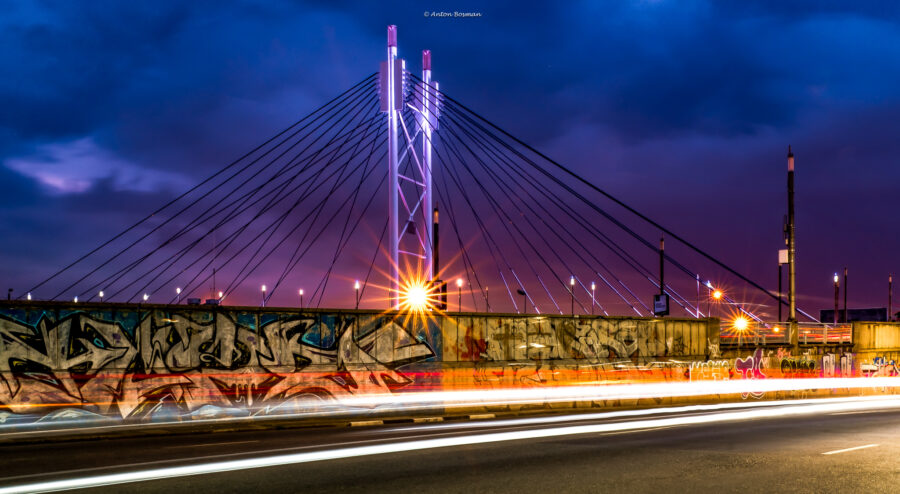 Now that we have covered that, let me explain why I edit and process my work the way I do.
For the longest time, since an early age, I became quite smitten with artists like Monet, Renoir, Van Gogh and Edward Hopper.
To me they created a world that was a dream world, no different to the world we live in, but just a more dreamy and beautiful version of the world we know. 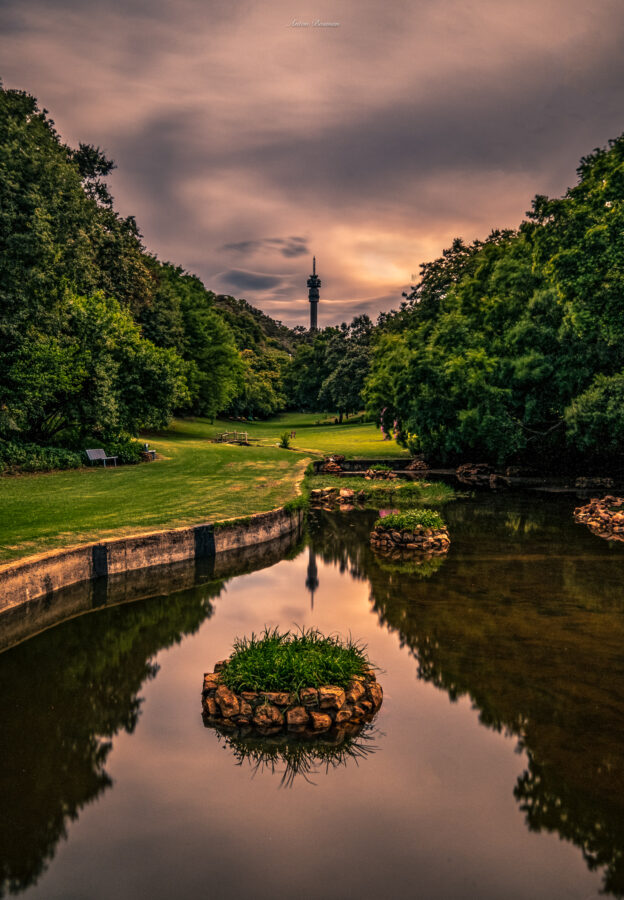 Studying their work intensely with every spare moment I had.
Two works in particular are Nighthawks – Edward Hopper and Starry Night – Van Gogh.
What makes these works so beautiful and intriguing, is the fact that the artists gave us their narrative.
A narrative that saw the world through their eyes, in the way they wanted us too see the world. 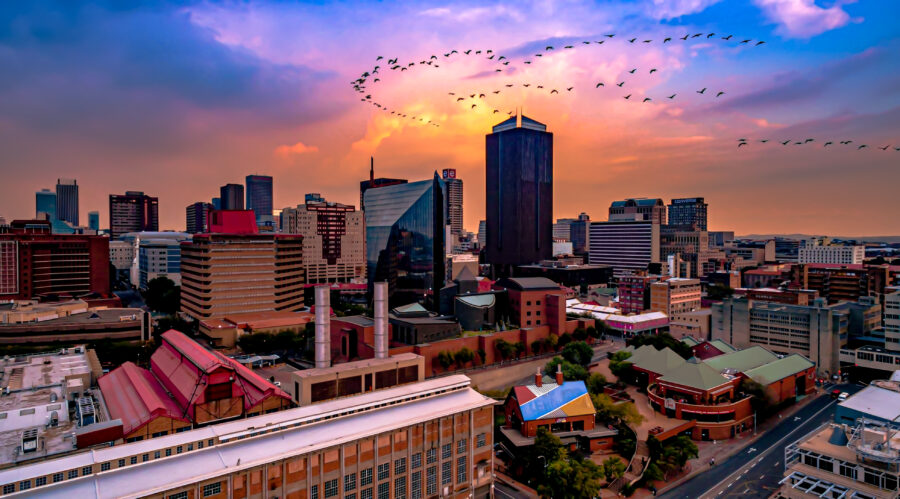 “Who do your images look the way they do”
Those questions get asked all the time.
Every city is plagued with issues, no matter where we are in the world.
Johannesburg is no different, and often she has problems that to some are about to bring us the end of the world.
Truthfully every city in the world has its cleaner areas, its busy spots and then those dangerous areas, where you could lose an ear for a packet of Simba chips (some loose humour). 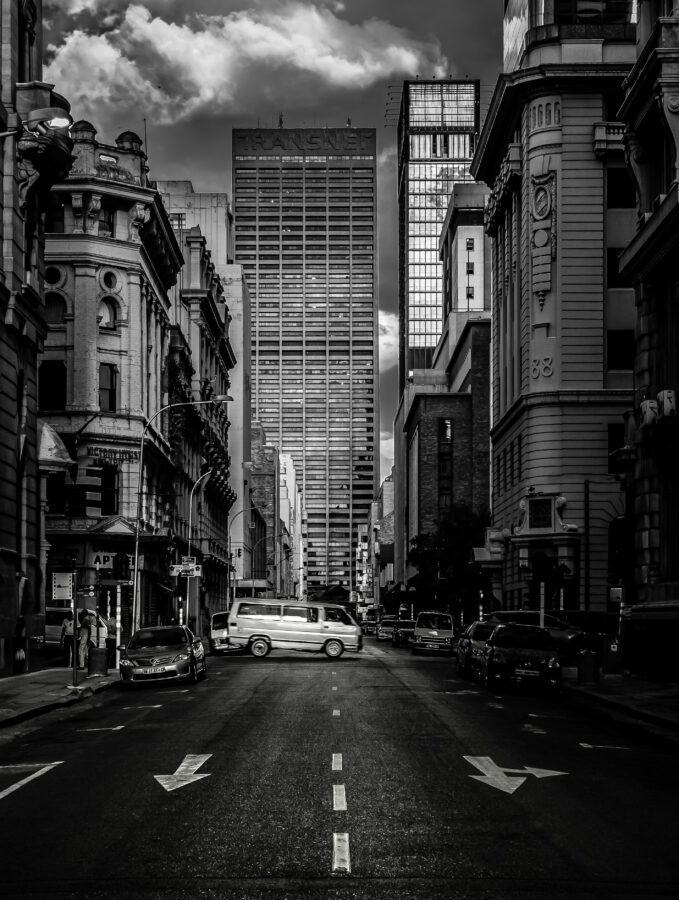 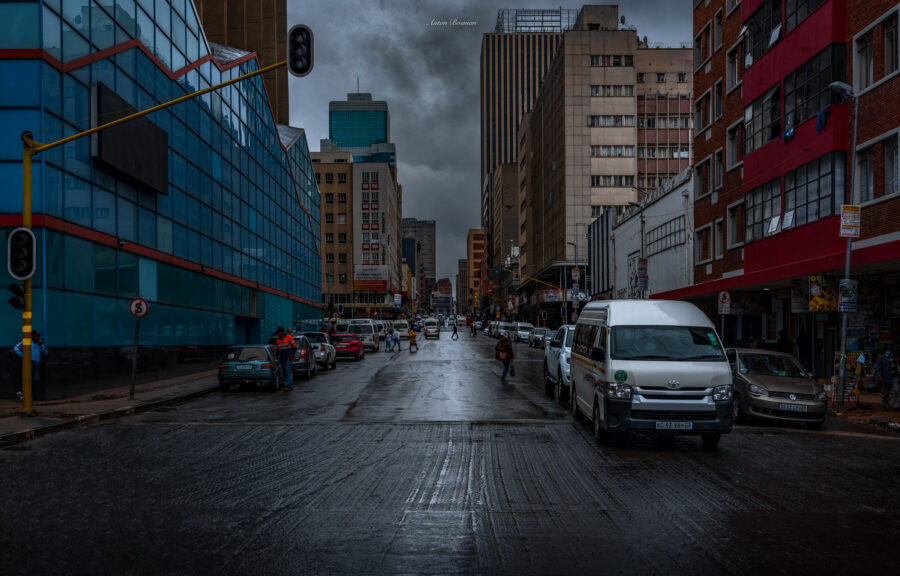 Since I started taking photos of Johannesburg around 14 years ago, I decided that my lens and camera will be used to paint the narrative that I want to show people out there.
Daily someone would comment on one of my pictures as to how “it doesn’t look like that anymore, I was there a year ago and it looked terrible”.
Then I think to myself that they must have been there the same time a year ago when I took the picture. 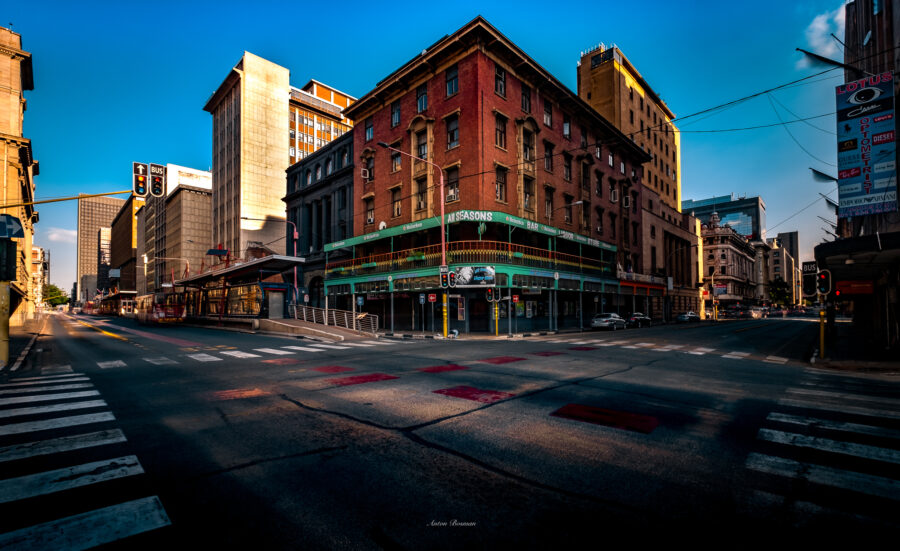 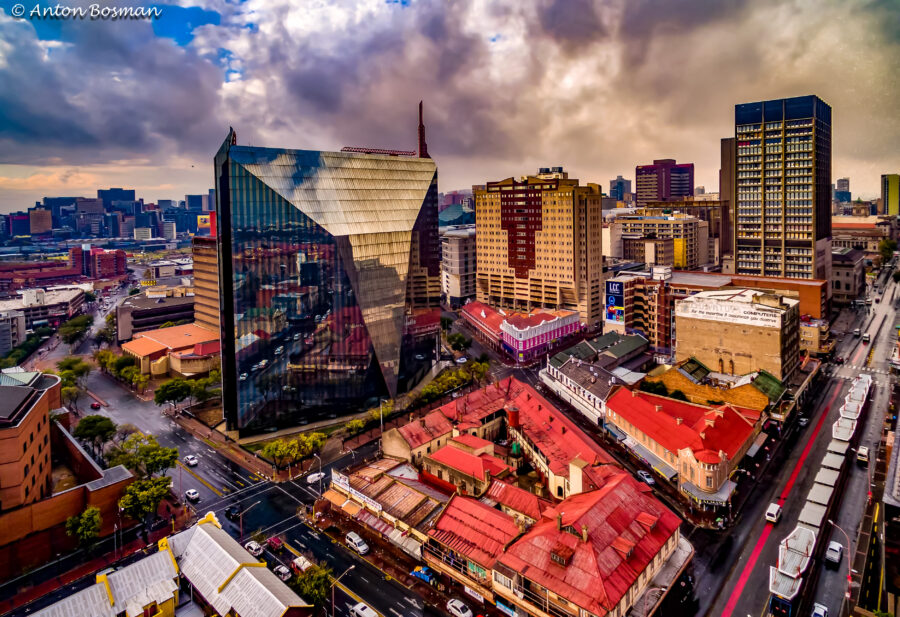 Johannesburg is 136 years old this year.
Much has happened since her establishment in 1886. Many buildings have come, and many have gone.
A city with some of the most spectacular art deco buildings in a small condensed space to the towering Carlton Centre, 11 Diagonal street, designed by Helmut Jahn and then the mysterious but spectacular architectural marvel known as The Standard Bank Centre.
This building was built from the top down, an engineering marvel in its day, and to this day one of only few across the world. 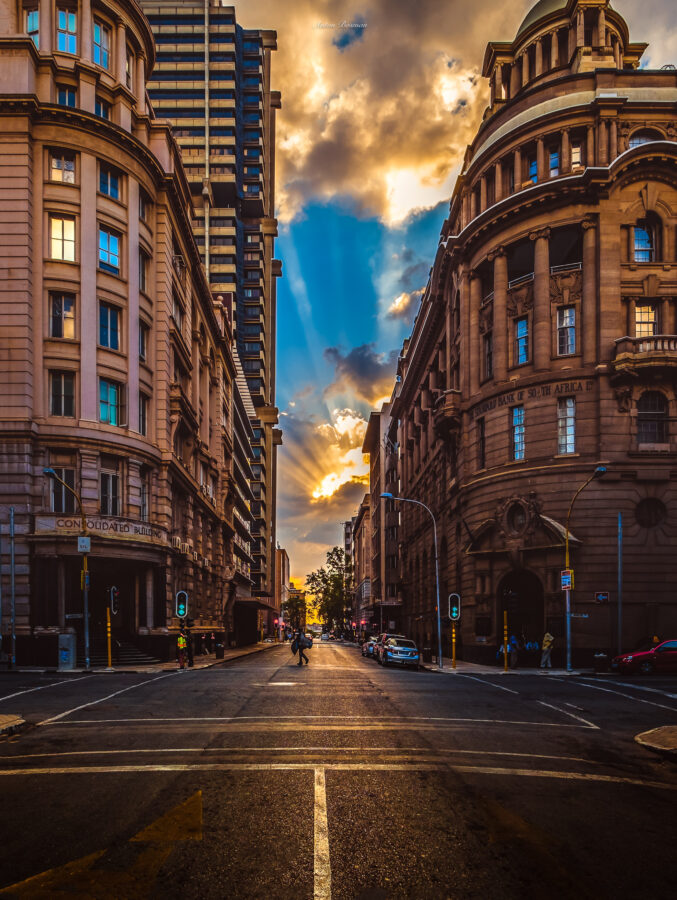 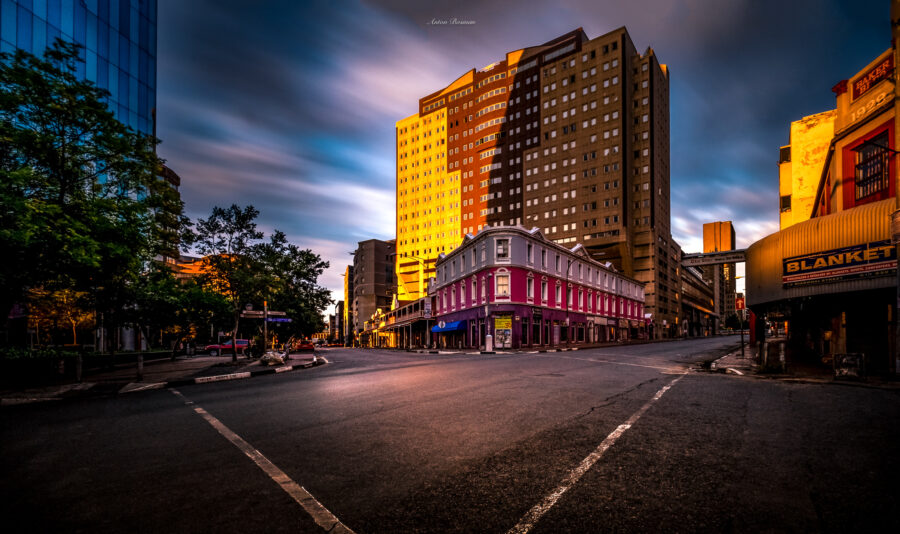 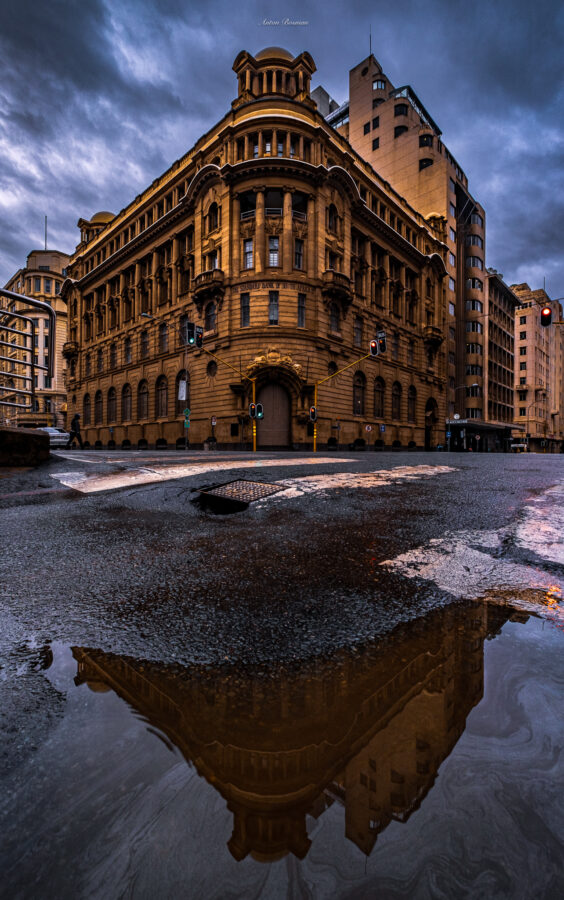 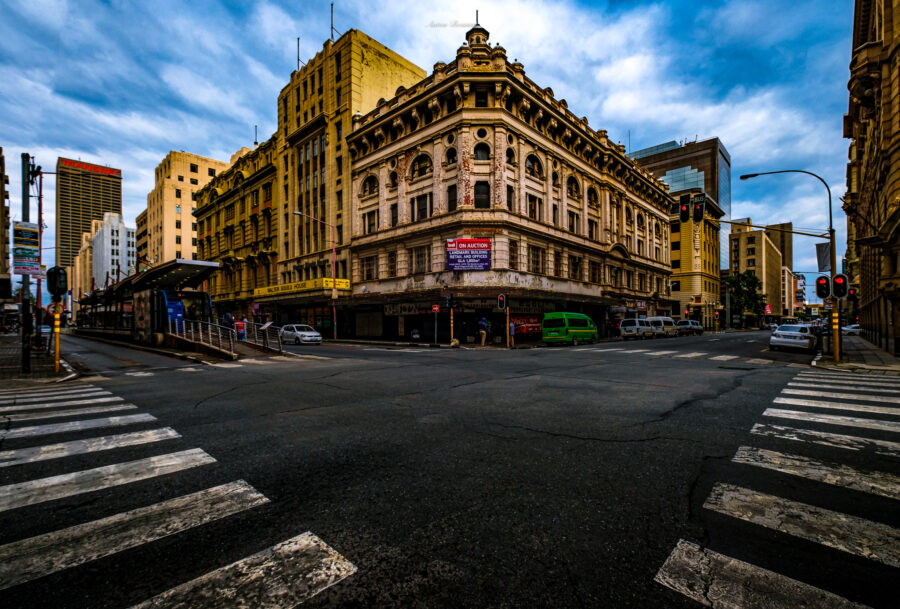 But for many of us, we will remember Johannesburg mostly from the 60’s. 70’s and the 80’s.
When Johannesburg was a hub of nightclubs, with Park Station and Van Der Bijl Square, now known as Gandhi Square, becoming heavily used points for people travelling in to the city from surrounding suburbs and towns to come and enjoy her “vibe” and various cultures. 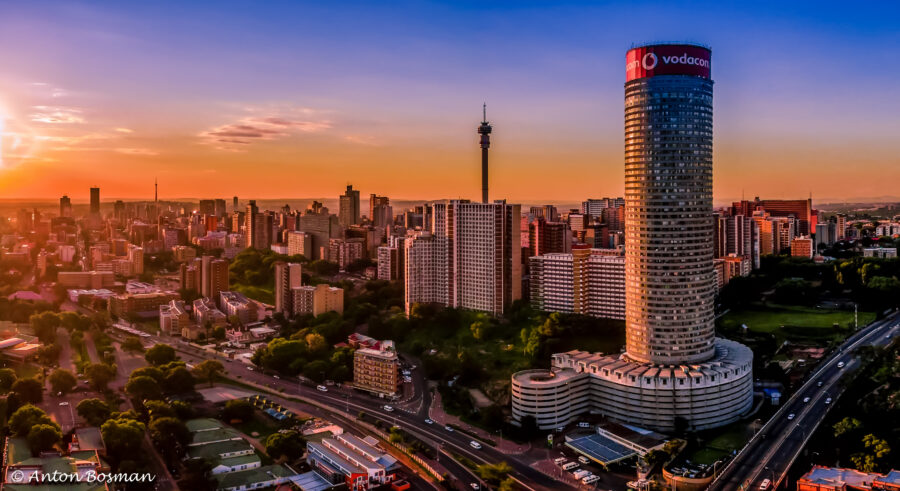 The Christmas lights, the Carlton Ice Rink, Braamfontein and the record stores, Hillbrrow with its record bar and Fontana’s and several other coffee shops and take away vendors.
For some its Ponté still standing tall, which is also often used in international movies, and for others the Telkom Tower, and if you are like me fortunate enough to have eaten at Heinrich’s revolving restaurant, you will know exactly what happy emotions all these memories bring. 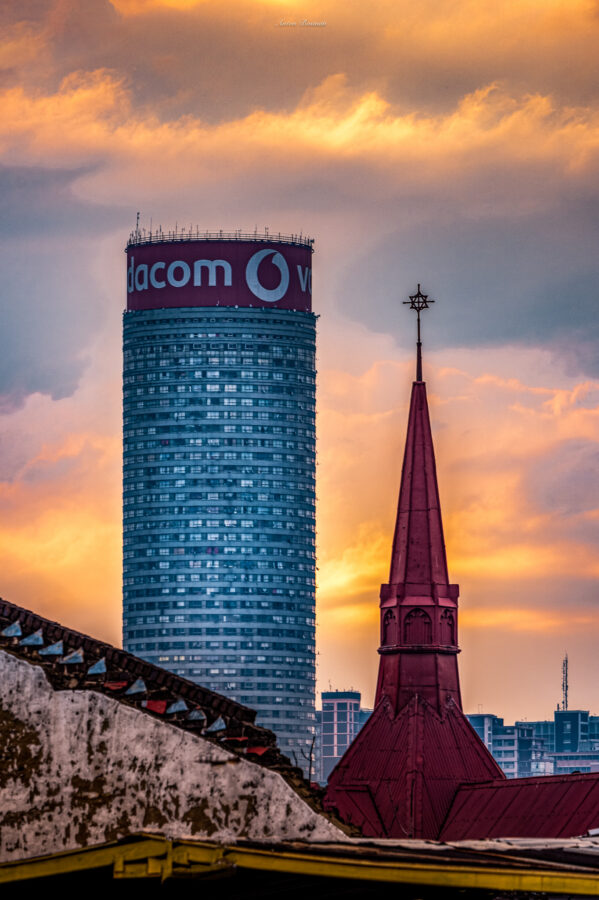 That is the Johannesburg I love and the Johannesburg I choose to remember.
A city where you could escape, let your inner self be free and enjoy a little slice of San Francisco in the 70’s.
Cities evolve and change, the world is evolving and changing and with that our inability to not accept this, also needs to change. 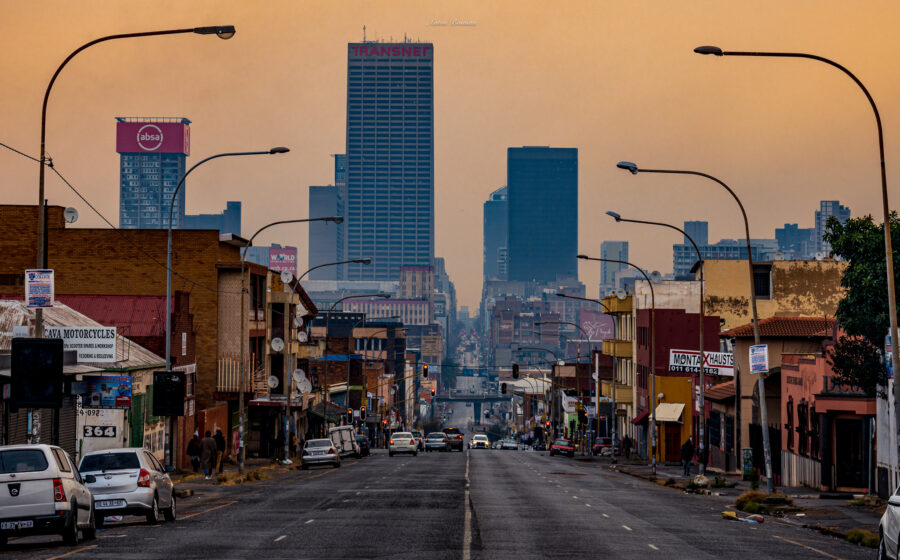 This is where I have decided to portray my work and bring the narrative I want the world to see.
A city full of mystique, character, class and run down urban spaces.
Everything about Johannesburg is beautiful if we choose to see it as such.
As a photographer I use several in depth techniques like long exposure and light painting to create a feel and atmosphere I want the viewer to see.
Sunrise and sunsets are exquisite in the City of Gold, and I use these beautiful gifts of nature to bring a sense of longing, a sense of remembrance and appreciation to those who look at my pictures. 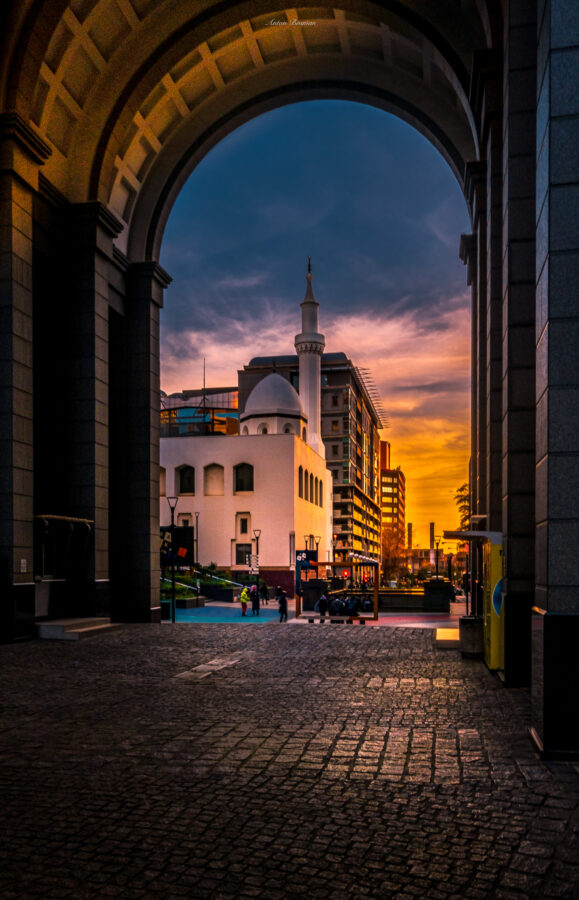 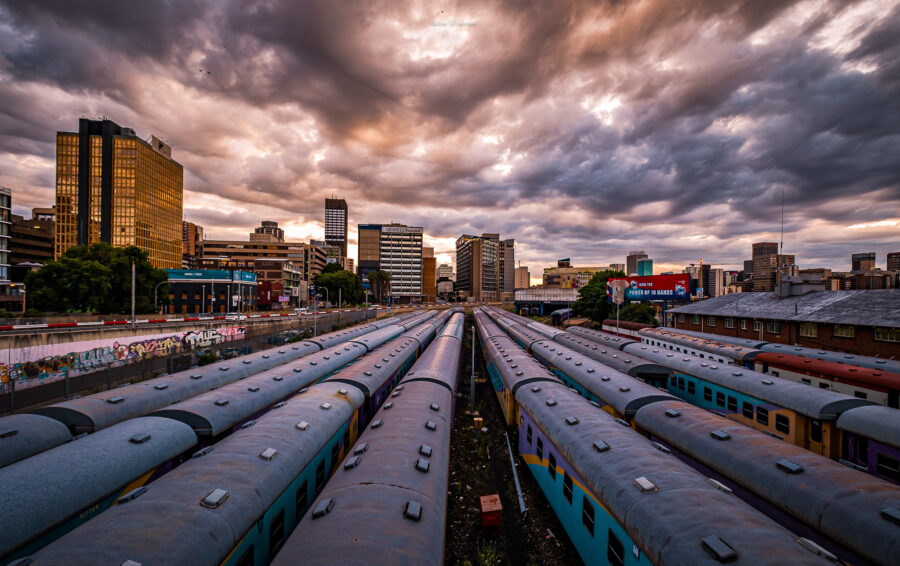 Please enjoy these pictures of our beautiful city. 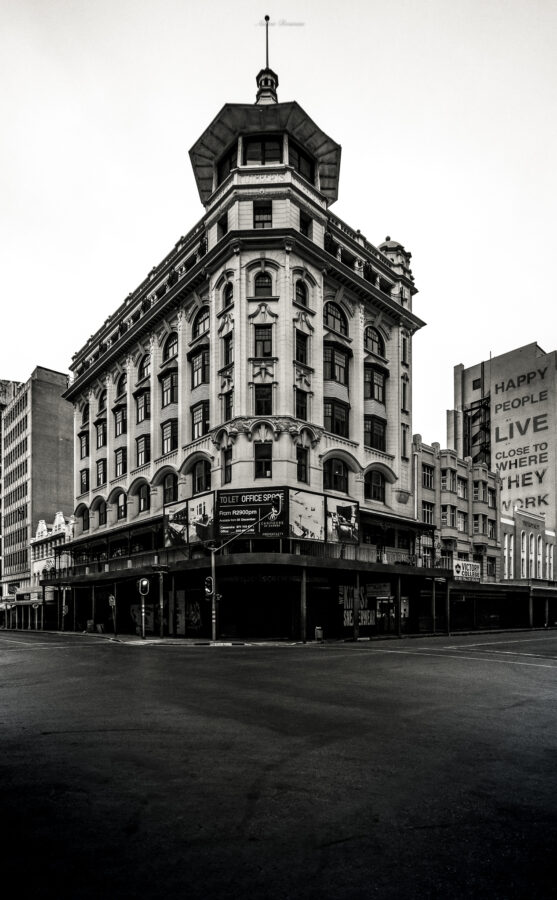 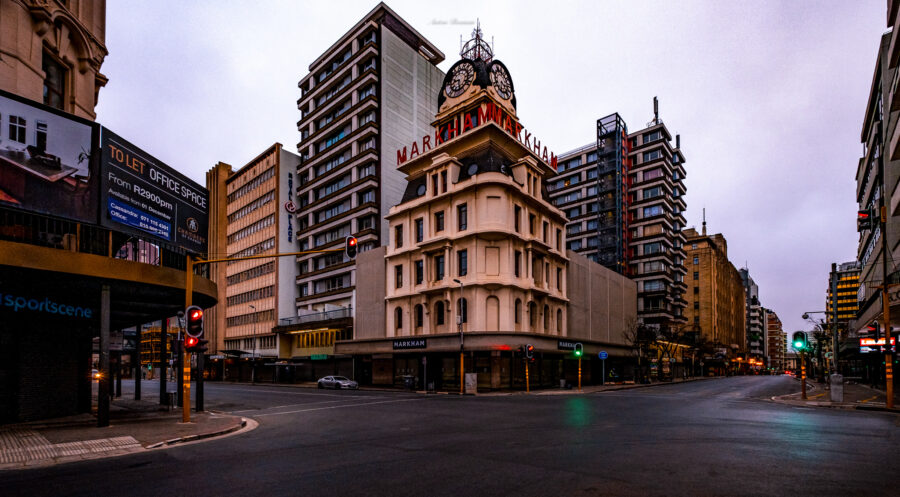 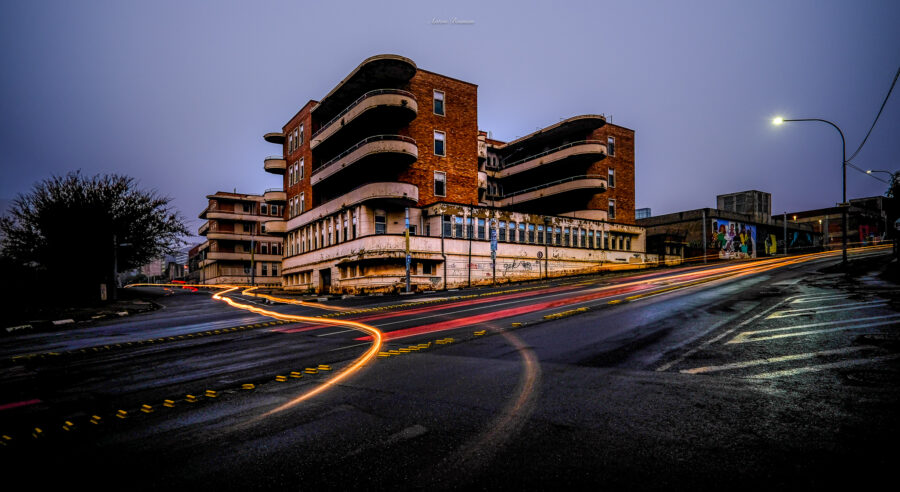 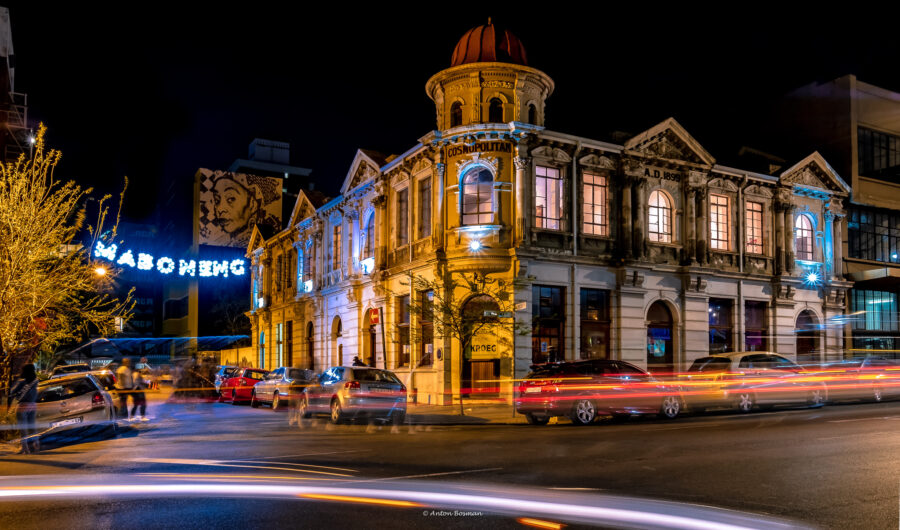 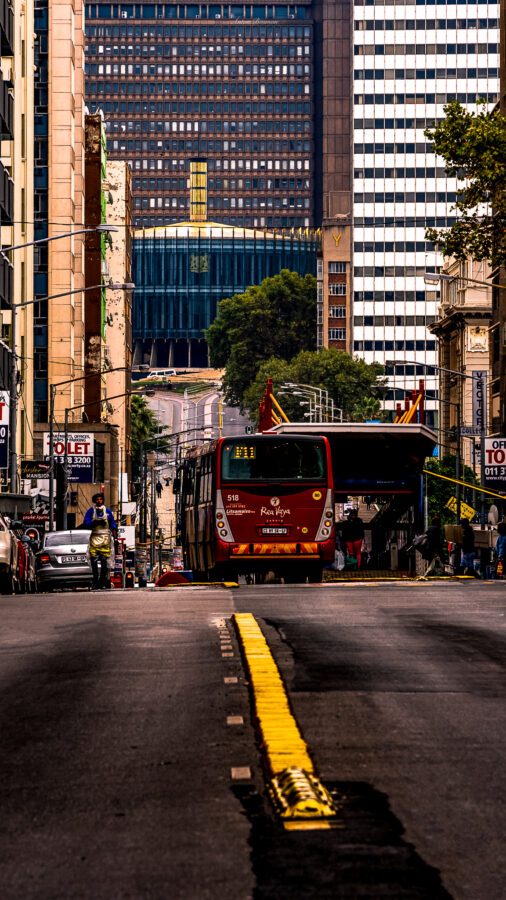 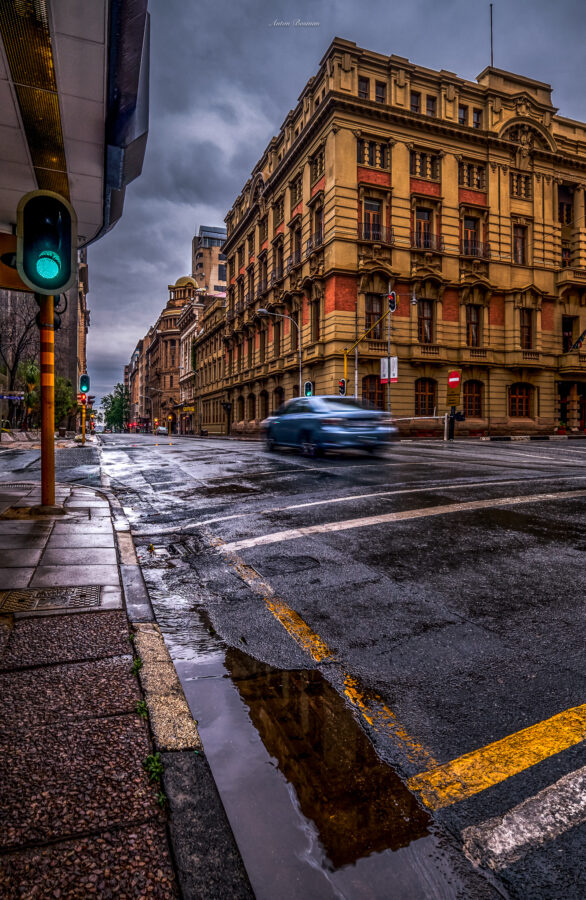