Africa’s conservation heroes were celebrated at the prestigious 2022 African Conservation Awards at the African Rangers Congress in Botswana on Saturday, 17th September.

The awards are an annual celebration to honour the courageous men and women who are committed to protecting Africa’s natural spaces and in doing so raise awareness of the critical and diverse work they do to ensure that our wildlife and wild places are safeguarded for generations to come.

Now in its 11th year, the awards were once again celebrated after a 2 year hiatus due to the pandemic,  at an in person event as part of the African Ranger Congress. The event was hosted by the Game Rangers Association of Africa in Kasane, Botswana where rangers from across Africa gathered to share experiences.

His Serene Highness Prince Albert II of Monaco, who is the Patron of the African Conservation Awards, reminded us of the ‘threats and dangers this selfless group of individuals face’ by referring to the assassination of Best Game Ranger Award finalist Anton Mzimba in a  video message;  ‘It reminds us of the importance of your profession, the risks you face on a day to day basis but also the determination and dangerous nature of those you confront and whom you often face alone. I applaud the fact that you are now honouring all the heroes of biodiversity beyond the rhino alone.  You  are the fighting vanguard of a global movement which should be promoted,  encouraged, supported and prolonged by all of us.’

Each organisation and individual that has been shortlisted has shown remarkable determination to succeed when the odds have often been stacked against them and the African Conservation Awards provides the platform to ensure they get the recognition they deserve.

The winners, selected by evaluation of the work done over the last 12 months, starting in July 2021 were announced as follows: 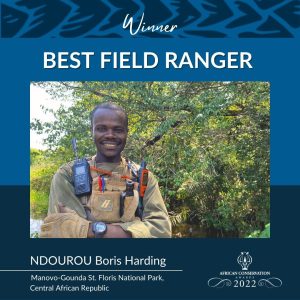 Winner: NDOUROU Boris Harding, Manovo-Gounda St. Floris National Park, Central African Republic – As Head of Sector, Boris leads a team of 80 rangers and ensures tactical advice on operational deployments where he leads anti-poaching and biomonitoring activities. Until 2019, this park was subject to poachers, illegal wildlife traders and armed groups, but Boris took the lead in relaunching operational activities in the park, resulting in an increase in wildlife. To date, Boris’s anti-poaching operations deterred 147 infringers from poaching and confiscated 41 hunting weapons. He has also reached 258 transhumance pastoralists through awareness-raising activities and helped divert 23,000 heads of livestock out of the national park.

Boris has been committed to the conservation mission since 2008 and works alongside the Wildlife Conservation Society team. 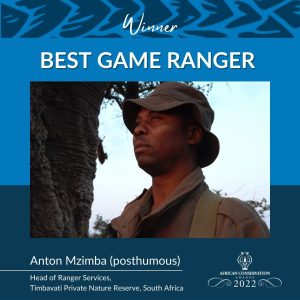 Winner: Anton Mzimba (posthumous), Head of Ranger Services, Timbavati Private Nature Reserve, South Africa – Anton began his career at Timbavati Private Nature Reserve as a general worker in the mid 90s where he fixed roads, built gabions, maintained fences and completed the daily tasks required of a general labourer. He always strived to be a ranger and over the next 25 years,  Anton rose through the ranks, progressing from ranger to Corporal, Sergeant, and finally becoming Head of Ranger Services.

Besides the numerous accolades and press, Anton’s greatest gift was his ability to lead and inspire the people from the local communities that border Kruger National Park. Anton led by example, working to change the stigma that conservation was a wealthy minority’s privilege, and instead a birthright to all of humanity, from all backgrounds, races and cultures. He believed in developing his team and wanted both local men and women to have the opportunity to climb the ranks into leadership roles.

On 26th July 2022, Anton was assassinated outside his home by three gunmen alleged to be linked to poaching syndicates, paying the ultimate sacrifice for being a ranger and a leader on the front lines of the rhino poaching war. 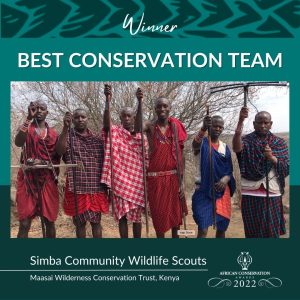 Winner: Simba Community Wildlife Scouts, Maasai Wilderness Conservation Trust, Kenya – Simba Scouts are a conservation team working within Kuku Group Ranch in southeastern Kenya. They include a dedicated team of 18 Maasai warriors (Moran’s), who day in and day out monitor GPS collared lions and other wildlife species which is a very significant measure for mitigating human-wildlife conflict within the local Maasai communities.

Another impact of the Simba Scouts has been the influence of the community in embracing conservation. Before becoming Simba Scouts, some members of the team were renowned warriors who led in lion hunts. However, they have become the lion guardians in the ecosystem, which is a testament to their good work. 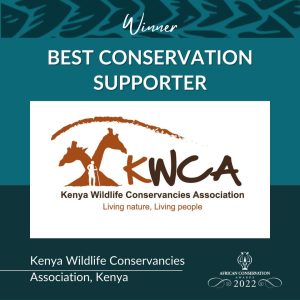 Winner: Kenya Wildlife Conservancies Association, Kenya – In the last four decades, Kenya has lost more than 68% of its wildlife. Kenya Wildlife Conservancies Association (KWCA) was established to address this issue. KWCA has mobilised a membership of 174 mainly community conservancies to adopt a holistic approach to addressing the biodiversity crisis and tackling the complex problem of habitat loss. Today the network of over 215 conservancies in the country are a celebrated success as the organisation marks its 10  year anniversary. The network of conservancies has more than doubled the area under conservation from 8% of the country’s landmass to 20% (addition of 7.2 million ha of conserved land) today mainly due to the enabling policy environment and incentives negotiated through KWCA.

“In these dark times of unchecked human overpopulation, which causes climate degeneration and destruction of wildlife and the natural world, our conservation heroes are the last hope! The assassination of Anton Mzimba and the deaths of hundreds of his conservation hero colleagues worldwide emphasises the crisis. Please join me in congratulating all of the winners and finalists of the African Conservation Awards 2022!  We are incredibly grateful to you” – Dr Larry Hansen, Founder of the African Conservation Awards.

On the morning of the awards wildlife ranger teams united for the 2022 Wildlife Ranger Challenge, a half marathon which takes place around the world with one goal: to raise money to support the men and women on the front line of Africa’s protected areas.

94 ranger teams registered for the Wildlife Ranger Challenge 2022 from 21 different countries! Those attending the Rangers Congress in Kasane attempted the “Fastest Known Time” at Kasane for 21km with 22kg.

As well as raising money for front line conservation efforts, this pan-African sporting event aims to raise awareness of the increasingly diverse role of wildlife rangers at a time when resources are more thinly stretched than ever before.

The African Conservation awards are hosted annually by the Game Rangers’ Association of Africa (GRAA) and are made possible with the generous support of sponsors Chinese New Enterprise Investment (CNEI) and are endorsed by the Department of Environmental Affairs (DEA). His Serene Highness Prince Albert II of Monaco, who is committed to the protection of endangered species through the support of his Foundation, is the Patron of the African Conservation Awards.