Grand Final day is huge in Australia. Ask any South African expat. But this year the AFL (Australian Football League) has attracted worldwide attention, with a sweet moment between the winning captain and a beautiful fan captured on film, after the Geelong Cats were crowned premiership winners.

Watch below as the team’s captain, Joel Selwood – an Aussie Rules player known for impacting lives both on and off the field – spots Sam Moorfoot in the MCG crowd and not only embraces him, but tells him he wants him to come over the fence and join the team to celebrate.

Sam – who has Down syndrome – is the team’s water boy, as well as being the players’ biggest fan (since childhood), and is unofficially known as the team’s “spiritual leader”. He’s been working with the Cats since 2015.

For Joel to recognise and show Sam how much he means to the footy club the way he did, has sent goosebumps around the globe, with the video going viral. Former NBA player, Rex Chapman, retweeted it to his 1.2-million followers, saying: “Because most everything else sucks right now, please check out these 40 seconds”. 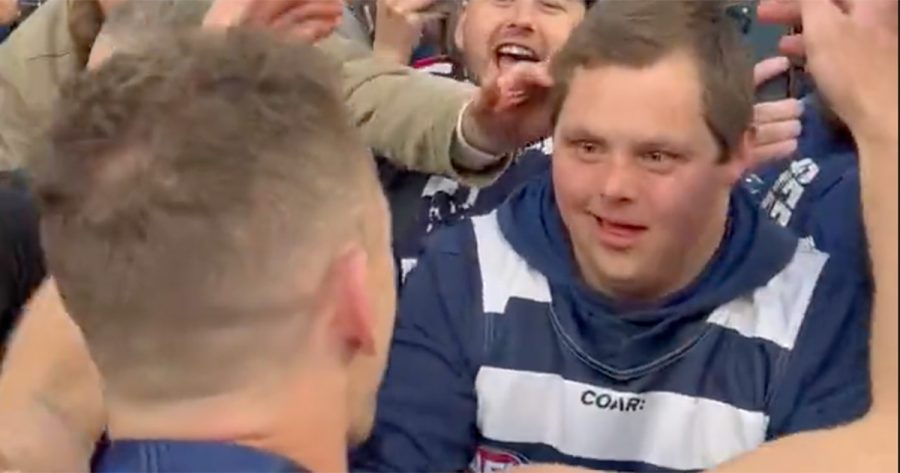 Sam said: “Best day of my life! So proud of our boys. Go our Cats!”

In the video, you can see Sam’s eyes widen with disbelief when Joel tells him to come over. “Joel said he wanted to get me on the ground. That was the moment of my life, what an honour,” Sam said aftwards. Watch below as Joel helps Sam over the fence to celebrate wit the team, and even hold the trophy…