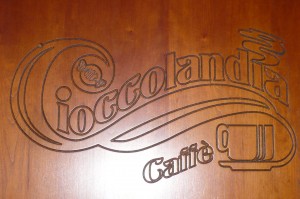 When it comes to coffee, the older generation of Italians are purists. None of those Starbucks flavoured coffees for them. The traditional Italian coffee culture flourishes in quaint, sometimes pokey little bars the size of postage stamps. The younger generation instead like to frequent the modern, trendier coffee bars where they can be found propping up the counters and eyeing up the competition. In fact they are not really there for the coffee.

Mostly its only the tourists that sit down and wait for table service. And die waiting. Normally you pay for your coffee at the cassa first and then place your order. If you want to order from a menu that details each variation, then these traditional bars are not for you or you may need to know some basics. Here they are.

In Italy if you ask for a caffè, it naturally implies an espresso and is served in a porcelain demitasse. (There is no such thing as an expresso and there is no need to specify espresso). What you get is a strong coffee served in a tiny cup. The best espresso has strong caramel-coloured foam on top, which is the crema. Generally, the thicker the crema, the stronger the brew. And this is what Italians drink, a thick, black shot of pure coffee usually without milk or sugar. Guaranteed to put hair on your chest or at the very least provoke serious tachycardia. I wouldn’t sleep for two nights if I tried that!

There are whole lot of variations on the basic coffee. Milk can be added to most of these options, just remember to specify, correctly in Italian, how you want your particular coffee: doubled, long, chilled, reduced. You might otherwise end up with something you didn’t really want.

The ristretto or stretto, (definitely not for beginners) or reduced coffee, is served in a demitasse, has less water, is more concentrated and therefore even stronger than a caffè. The caffè lungo is a diluted espresso served in a tall cup. A setting found on most espresso machines allows more water to run through the filter, resulting in a ‘longer’ coffee. The consistency and strength is not that of an espresso. A doppio is two shots of espresso served in a larger cup, called a tazza.

The Americano is an espresso diluted with hot water and served in the larger cup. A leftover from the American GIs during WWII who couldn’t handle it’s strong flavour. Caffè freddo is when an espresso is left to cool, either in a refrigerator or by adding some ice. Caffè d’orzo is a coffee made from barley and is a popular alternative to traditional espresso and the deca version. It can be ordered as a single, doppio (double) or macchiato like a normal caffè. This is very popular with expectant mothers. Deca is simply a decaffeinated coffee. Asking for a caffè Hag (pronounced Ahg, with a silent H) will also get you a straight decaf coffee. The brand Hag is synonymous with decaffeinated coffee in Italy and has almost become a generic term.If you ask for a latte in Italy and you will be served a large, tall, glass of hot milk. The correct way to order this drink is to request a caffè con latte – coffee with milk. Essentially this is a shot of espresso, double the amount of hot milk and topped with a little foam.

Then there is the cappuccino. Equal parts espresso and steamed frothy milk, a perfectly made cappuccino (not that easy to find, not even in Italy) is light, and velvety smooth. This is served in a tazza.

The macchiato (in Italian macchiare means to stain) is an espresso stained with a tiny amount of frothed milk and served in a demitasse cup or tazzina. This is not a mini-cappuccino. Variations are the macchiato caldo or freddo. The caldo is served with hot milk and the freddo with cold or lukewarm milk often served on the side. Many bars provide a communal container of milk on the bar. A macchiatone is the exact same thing in a larger version.If you would like your coffee reinforced with a shot of something, then you should ask for a caffè corretto. You should also stipulate what spirit you would like the coffee doctored with, as in: caffè corretto con grappa. The shot in this case could be a small measure of grappa, but you can choose anything from Sambuca to cognac, brandy or rum. You may not want to try this too early in the morning or on an empty stomach, you could end up with more grappa than coffee if the person serving you has a heavy hand.

For the design conscious there is the marocchino. It is a shot of espresso served in a glass demitasse (purely for aesthetic reasons, so the different layers are visible), with a layer of dark cocoa powder (added either before or after the milk, sometimes both) and milk foam spooned on top. This should not to be confused with the mocaccino which substitutes the layer of cocoa powder with one of liquid chocolate or sometimes even chocolate liquor or the espressino which is an espresso ristretto topped with frothy milk and a sprinkling of cocoa powder. Both also served in a glass demitasse.

Latte macchiato, which literally means milk stained with coffee, is exactly what it says and is served hot in a glass cup or in a tall glass and is larger than a cappuccino.

When it’s too hot and humid for a regular coffee but you need the caffeine fix try the caffè shakerato. This is a freshly brewed espresso which is shaken vigorously with lots of ice and sugar (only if you ask for it) until it gets frothy and is then poured into either classic Martini glasses or champagne flutes. Delicious on its own or embellished with Bailey’s Irish Cream for an even better experience. You can also make this at home using a Martini shaker.

Granita di caffè is coffee ice and can be made with flavoured coffees such as hazelnut and cinnamon. Can also be served with whipped cream. You will only find this in the Summer and usually only in gelaterie.

The caffè completo is an espresso which is topped with a dollop of freshly whipped cream and a sprinkling of cacao (cocoa). Sometimes they will add some chocolate syrup to the bottom of the cup. You can also ask for a caffè con panna and you’ll get the same thing. Most bars use sex cream, (the kind that comes in an aerosol can) but its just not the same as the real thing.

There is a quote that says: The perfect coffee should be black as the devil, hot as hell, pure as an angel and as sweet as love. Whichever way you like your caffè, go and order it with confidence!

Practice what you preach, indeed!