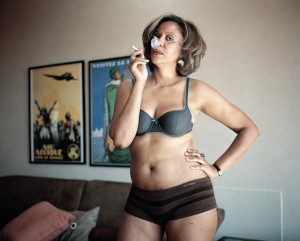 Check out the great South African exhibition at London’s prestigious V&A (Victoria & Albert Museum). The exhibition – ‘Figures & Fictions: Contemporary South African Photography’ – presents the vibrant and sophisticated photographic culture that has emerged in post-apartheid South Africa. It features works by some of the most exciting and inventive photographers living and working in South Africa today. The photographs on display respond to the country’s powerful rethinking of issues of identity across race, gender, class and politics.

The 17 photographers featured are some of the most exciting and inventive living and working in South Africa today. They range from established practitioners such as David Goldblatt, Santu Mofokeng, Pieter Hugo and Zwelethu Mthethwa, to a new generation including Zanele Muholi and Hassan and Husain Essop. View a sample of each one’s work below.

The exhibition is sponsored by Standard Bank and runs from 12 April – 17 July 2011. BOOK TICKETS NOW.

Here’s a sample of the photography on display…and a quote from each photographer:

“Even within a complex society such as South Africa, across all communities, women hold unnecessary perceptions of self doubt around themselves and their beauty from an early age.”

“The person I use for many of these portraits is essentially a performer; he’s a pop icon in South Africa who everyone knows from television and radio”

“Halaal Art” was something that started during our trip to Cuba. It was about the way we were living, the challenges we faced as Muslims in a country that didn’t have Islam”

“In post-Apartheid South Africa I became acutely aware that little signs were mushrooming on our sidewalks and on our trees and poles advertising all kinds of services: painting, building, tilling, carpentry”

“There’s something very condescending in assuming custodianship of other people’s representation.”

“I started walking around the park and discovered, to my delight, that the park was full of street photographers”

“For me, coming out as a gay man with a dress, is a very political thing.”

“We’re not going to be here forever, and I wanted to make sure that we leave a history that is tangible to people who come after us.”

“Because in my western thinking it’s very formal evening attire. Why do their shirts look like women’s blouses with frills? It’s fascinating.”

“I think in clichés of traditional, rural hospitality, custom, things time-honoured and unmolested by city life. But the sense of it is elusive, muted by prejudice, obscured by ignorance.”

“Although these are quiet works, there is a suggestion of suffocation, particularly as the hands are clasped, searching for comfort.”

“It includes a watched-over street party and a visual catalogue of the garden sheds or ‘Wendy houses’ that guards sit in to defend the houses and properties of their employers.”

“I belong to Africa. Afrikaners are Africans. We have a very specific history as the oppressor here.”

“I am interested in how we read fashion, and how my subjects use their clothes to construct, and often deconstruct, their guises of identity.”

“My modus operandi would be to drive around until I found something that resonated for me. I would wander into people’s homes and environments and it was so amazing how people just let me in.”