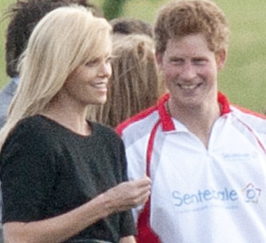 OK, there’s no real news here…except that the British tabloids published pictures of Charlize Theron chatting to Chelsy Davy’s on-off boyfriend  Prince Harry at a polo match this weekend. And judging by the smile on Prince Harry’s face, he finds it rather easy to get on with women from South Africa!

The 26-year-old British Prince and 35-year-old South African actress were spotted talking and laughing at the Audi Challenge Polo Cup at Coworth Park in Ascot, Berkshire. That’s it. News over. Here’s one of the pics, as viewed in The Daily Mail: