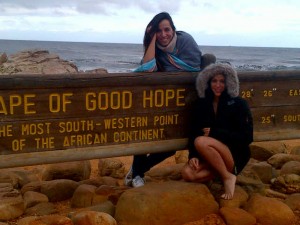 Columbian pop singer Shakira was slightly injured during an apparent sea lion attack whilst on holiday in Cape Town, South Africa. Within moments of the attack, Shakira tweeted: Omg what just happened to me! I was attacked by a sea lion! Lo que me ha sucedido hoy! Un león marino ha intentado atacarme Shak.

Once she’d calmed down, the 35-year-old took to Facebook to explain the gory details and her theory that the seal mistook her shiny BlackBerry for a fish. Here’s her special report:

“This afternoon I happened to see some sea lions and seals. I thought to myself how cute they were so I decided to get a bit closer than all of the other tourists and went down to a rock trying to pet them doing a baby talk while taking pictures…

“Suddenly, one of them jumped out of the water so fast and impetuously that it got about one foot away from me, looked me in the eye, roared in fury and tried to bite me.

“Everyone there screamed, including me. I was paralyzed by fear and couldn’t move, I just kept eye contact with it while my brother “Super Tony” jumped over me and literally saved my life, taking me away from the beast. We both got our hands and legs scratched by the rocks while trying to protect ourselves.

“I believe what happened is that it confused the shiny reflection of the blackberry I was taking these pics with, with some sort of fish. It probably thought I was teasing it with food and then taking it away from it. Wow!

“It’s funny that only half an hour before I was complaining to my guide Andrew that I never get to see wild animals up close on adventurous trips. Oh well, I can’t say that anymore!! Now I’m off to see some penguins! I hope they are a bit more friendly!”

And they were. She posted a pic saying they were “definitely friendlier” and whimsically noted that “once the penguins are a couple they are a match for life”.

The rest of her short South African trip wasn’t without drama. She posted another pic of a baboon on her car, and one of the view from her hotel room, saying “there’s a wounded dolphin stuck on the beach. I hope they can get him back in the ocean soon”.