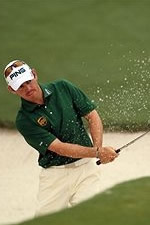 In a nail-biting finish, Ooshuizen’s dream of becoming only the sixth player in the world to win majors at the revered Augusta National and St. Andrews (which he won in 2010) seemed within his grasp.

Louis shot rounds of 68, 72, 69 and 69 to finish tied first on ten under par with American Bubba Watson. He looked set to become the second South African in a row to win at Augusta, after his close friend Charl Schwartzel won last year.

But in the sudden-death play-off, Louis missed out by a shot and it was the tearful American who clinched the honour of wearing the coveted Green Jacket…which he was helped into by defending champ Charl.

Bubba was overcome with emotion after being met on the course by his mother. His father – who taught him to play golf – passed away two years ago. He said: “I never got this far in my dreams. It’s a blessing. To go home to my new son [Caleb, whom he and his wife adopted two weeks ago], it’s going to be fun.”

Louis took the disappointment well, noting that Bubba “‘hit an unbelievable shot there. I played well. This is not one I felt like I played badly. Great stuff to him. He deserves it.”

And whilst 29-year-old Louis may not have won, he did make golfing history during his final round with an albatross (a.k.a. ‘double eagle’ in the US) at the par five second hole…which is the first in Masters history at that hole, and only the fourth in Masters history. [For those of us non-golfing pros – an albatross/double-eagle means he scored three under par (-3).]

Although it’s a fantastic achievement, it seems the feat also unnerved Louis.

“You know, it was tough after that double-eagle,” he said. “I mean, you know, when something like that happens early in your round, you think that this is it. That was my first double-eagle ever. So it was tough; it was tough the next five holes to just get my head around it and just play the course.”

This was the first major of 2012, and although Louis didn’t win, he has proved that he’s not just a one-major wonder!

UPDATE: Read Louis Oosthuizen’s response to all the support he’s received since the Masters loss.