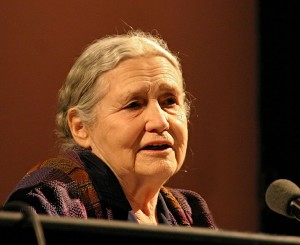 Nobel-prize winning author Doris Lessing has passed away peacefully at her home in London this morning. She was 94-years-old.

Lessing, who was brought up in Zimbabwe (then Southern Rhodesia), wrote numerous novels of which the most famous is probably ‘The Golden Notebook’, published in 1964.

She was born Doris May Taylor in Iran (then Persia) in 1919, before moving with her  family  to Africa where her father dreamed of becoming rich as a maize-farmer.

He wasn’t very successful, and nor was her first marriage. At the age of 30, and after the Second World War, Doris moved to London with her son and a manuscript she had written about a loveless marriage in a land of poverty and racism.

The  novel was ‘The Grass is Singing’. It was to become her first published novel, and so launch the career of one of the 20th Century’s greatest novelists.

In some of her early books she wrote passionately about communism; and she criticised racism, colonialism and South Africa’s apartheid system. The result was that her books were banned and she was barred in 1956 from both Southern Rhodesia and South Africa. Years later these orders were overturned and in June 1995, she returned to South Africa to visit her daughter and grandchildren.

In 2007 she became the oldest ever recipient of the Nobel Prize for Literature, at the age of 88, although the outspoken and skeptical visionary’s response, when informed that she’d won the prize, was: “Oh Christ! … I couldn’t care less.”

Some of our Favourite Doris Lessing Quotes:

“Whatever you’re meant to do, do it now. The conditions are always impossible.”

“That is what learning is. You suddenly understand something you’ve understood all your life, but in a new way.”

“As you get older, you don’t get wiser. You get irritable.”

“Laughter is by definition healthy.”

“It is my belief…that the talents every child has, regardless of his official ‘I.Q,’ could stay with him through life, to enrich him and everybody else, if these talents were not regarded as commodities with a value in the success-stakes.”