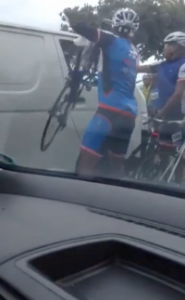 In the video – which Simon recorded on his cellphone on Sunday – a group of cyclists, angry with a parked vehicle, violently attack the driver.

The driver, who luckily only suffered bruises, was Tyberberg student Ibrahim Waggie (19) who was working as a volunteer at a 10km Big Walk on the day. His job was to drive the Toyota Quantum van, tailing the field, and enabling his fellow volunteers in the van to pick up empty and discarded water sachets.

The cyclists have allegedly been identified as belonging to the Muhammadeyah Cycling Club, Wynberg. The club posted a message on its Facebook page saying: “We are currently liaising with the relevant parties and investigating the matter.”

Here is a full account of the incident, as witnessed by Symon Scott. He posted the following message on FB yesterday (Monday):

“Earlier yesterday morning I was driving on Beach Road towards Cape Town, just past the Pavilion. There are two lanes and I was in the right hand lane. I found myself approaching a bunch of about twenty cyclists, probably practicing for the Argus Cycle Tour. They were in the left lane, but many were riding abreast so some were even encroaching into the right hand lane, past the center line.

“Aware of the new 1.5 meter rule, I slowed to give them space and was unwilling to overtake. Further ahead was a stationary vehicle that was double parked but it went unnoticed by the leader of the group who was looking back and communicating to the rest of the team. The group were moving swiftly and only at the last second when the leader again faced forwards, did he see the vehicle…. Just in the nick of time.

“He had to swerve to avoid the vehicle and this obviously upset him. He stopped his bicycle abruptly and flew into a violent rage. The entire peleton pulled up in support and some followed his lead. I fumbled with my phone for valuable seconds and eventually got the camera going, and filmed the violence unfolding before me. You can clearly see how they battered the vehicle, bent the windscreen wipers, pepper sprayed the driver, tried to steal his keys, assaulted him with a bicycle wheel and punched him and the passenger in the face repeatedly. There was a lot more going down than what you can see in the video.

“I drove away as the vehicles further behind me grew impatient but a few hundred meters further I decided to do the right thing and return to assist the driver and his passenger. By the time I got there, the cyclists had left (I passed them) and the Van was nowhere to be seen. I stopped at my friend Dave D’Aguiar, and shared the video. Dave was equally disturbed by the video and took it to Sea Point Police Station himself about two hours later. He inquired at the charge office if anyone had laid a charge against cyclists for road rage and, as coincidence would have it, the victims were themselves in the police station doing exactly that! As it turns out, they were volunteer workers cleaning up the hydration bags and other litter after the finish of the 10KM Sunshine D, Nelson Mandela Commemorative Walk.”

Violent Cyclist in the Cape – Video

“If you would like to be instrumental in bringing these hooligans to justice then please SHARE this post now. Like minded citizens may recognize some of the perpetrators and the clubs they ride for. If you recognize any of the cyclists in the video then either ‘name and shame’ or call the investigating officer directly, Warrant Officer Olivier on 021 430 3700.”