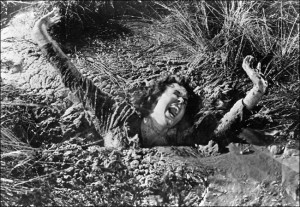 Let me tell you how I stepped out of my comfort zone and onto this new, very unfamiliar yet strangely intriguing terrain…

Before our pastor, Pete Veysie, began his sermon, he announced that Penny De Villiers was putting on an Easter production and was looking for actors.

I felt the familiar pangs of guilt assail me.

I had been going to George Methodist Church for seven years now and had avoided all theatre productions there like the plague. I did not want to get involved. I wouldn’t allow myself onstage because of my spasticity. My days of playing a part – of acting – were over. But the guilt continued to niggle.

“I could still offer my help though,” I thought. “Come on, Gaynor, get up off your butt and go and speak to Penny.”

After the service, I made my way towards her. Penny is a short woman…but what she lacks in stature, she makes up for in her exuberance and sheer love of life.

“Penny, I would like to offer my services for your Easter production, but…” I took a deep breath and ploughed on, “I don’t want you to mention my previous acting experience to anyone. I am not offering myself as an actor. I would like to be an extra set of eyes and ears for you. If you want me, that is.”

“Oh, Gaynor, you don’t know how much I have prayed for this. Thank you!”

I didn’t quite know how to respond to that, so I did a very quick exit!

There were about ten of us at the first rehearsal, ranging in ages from twelve to seventy. Penny welcomed us, stated that I was there to offer suggestions and then proceeded to hand out scripts. The production was broken up into various parts: a carpenter who is accosted by two soldiers and instructed to make three crosses; a scene between Simon, the man that carried Christ’s cross with him to his crucifixion and his wife, Ruth; the crucifixion of Christ, and a dance. I was intrigued by the scene between Simon and Ruth and at our second rehearsal suggested that I tackle that scene outside while Penny dealt with the other scenes.

I was working with two lovely people – Nico and Barbara. Not only did we work outside that night but that scene became “our” scene. We would get that scene to performance level. Penny need only worry about the rest.

So I was directing!

Nico and Barbara would come around to my flat in the evenings and together we worked on that scene. It was something that I’ve never done before. Directing. It was totally new to me. And I found that I enjoyed it. The ground was not the terrifying quagmire that I had anticipated. It was a new, interesting path and I was quite enjoying what I was being presented with along the way!

Just as I was stepping outside my comfort zone, so too were Barbara and Nico. The sinking sand must have looked horrifying to them as well. After-all, they were going to expose themselves to the public. They dared to take their first steps onto that “sinking sand” as I coaxed them along. They discovered that they could walk as long as they kept their eyes on me. Barbara and Nico trusted me totally. They were willing to try new things, say things in different ways, react as if for the first time. Finally, I showed them that they no longer needed me to coax them along the way. They could step out with confidence on their own. Let them see where their own paths would lead. And as a result, their performances grew.

Suddenly there were two very real characters speaking their lines in my living room. Barbara said to me: “Before you worked with us, we were like two speaking planks. You have given us…life!”

I stored that complement away.

Our comfort zones get nice, cosy and snug. Why should we leave them?

Because without leaving them we are unable to challenge ourselves. And without challenges we are only half alive anyway!

We joined the rest of the cast last Saturday afternoon for the final rehearsal. There was to be no afternoon sleep for me that day! Initially it was utter chaos but Penny, in her director’s role, was magnificent. She pulled all of the threads together and suddenly like a tapestry, a picture was forming. All the dancers joined us and, sitting in a church pew watching the events onstage, I realised that we had a production here. And it didn’t look bad. It didn’t look bad at all!

The next day we had three performances. And they were great! The wonder of our Easter production could be summed up in one of the performer’s beautiful baritone voices, when he said:

“Surely this man was the Son of God!”