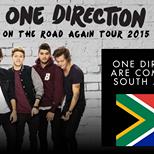 British Supergroup One Direction announced today that they will be touring South Africa next year. The band released a statement this morning saying “here’s a bit of a huge announcement for you. Who’s ready for ANOTHER tour in 2015? The ‘On the Road Again Tour’ to be exact! IDHQ x”

The South African One Direction dates are:

As with many other international tours, Durban has been left off the itinerary.

Earlier this year Gauteng teenager Filipa Carmo da Silva (18) won a global One Direction cover song competition, run by American TV show host Ryan Seacrest for her video cover of their hit ‘Story of My Life. It would be wonderful if they could invite Filipa on stage to sing the song with them!

The band also attributes their success to their millions of loyal fans, and today released what they called a “pretty special” video for its fans, called The You & I Fan Video “to thank you guys for being the best fans in the world”.

The video includes a montage of recent You & I video selfies that One Direction had asked their fans to upload. It includes some “selfie singing action too”.

And they amped up their promotion of You&I which is out this Sunday (25 May). You can pre-order it here:
http://smarturl.it/1DYouAndIPreOrder?