It’s the busiest time of the year, but South Africans have been experiencing extreme power outages that wreak havoc on Christmas shopping…along with all the daily mundane things like watching the food go ‘vrot’ in the fridge! (This article was published in December 2014! Click here for an update on the Top 10 South African Loadshedding / Load Shedding Jokes for 2018.)

But most South Africans have found a way to laugh about it and make the most of a ‘dark’ situation. The nationwide cry ‘Nou Gaan Ons Braai’…has become Nou Moet Ons Gaan Braai…but being South African, nobody minds that too much!

There are the water outages too though…which are fine for those with a swimming pool in which to dip, but can be a hassle when you’ve been waiting three hours and are desperate to shower and get to an appointment.

Cinema singer and promoter Jarrod Aston wrote on Facebook: “To the majority of South Africans that are resilient in the face of corrupt leaders, load shedding, water outages, potholes and general mismanagement, I take my hat off to you all. It’s because of you that this country works.”

The recently released Sunday Times Rich List revealed that some of the richest people in South Africa are actually those directors of Eskom (or Ek’sDom as some are now calling it) who are responsible for the nationwide power cuts. (The very word ‘loadshedding’ being used for power cuts has had quite a few foreigners confused, with one facebook user revealing that her Irish friends thought “it was something to do with going to the loo”!).

Carole Scott sent in this message to SAPeople’s Facebook page which addresses those Eskom bosses – “This is for all of you in South Africa (pinched from a friend’s page):

“Our father who art in Eskom, powerless be thy name. Thy kingdom badly run, thy power undone, in Joburg as it is in KZN. Give us this day, our half-baked bread, and forgive our trespassers who shoot us dead. Lead us not into a dark nation but deliver us from load shedding. For thine have no kingdom, no power and no electricity, Amen.”

According to the latest Rich List reports, a whopping R52-million was spent on eleven officials employed by Eskom. The previous CEO Brian Dames, who left a few months ago, earned R8.5-million, while both the former finance boss Paul O’Flaherty and Erica Johnson, former service head, earned R5.9-million each.

While the outages are obviously no joke and have a detrimental effect on the running of businesses, not to mention family homes and an entire country…South Africans have found a way to laugh (with a collection of some of the jokes displayed on this page). And many have enjoyed the quality time together from playing board games by candlelight to lying under the beautiful full moon this week, watching out for falling stars.

As Edith Powell pointed out on SAPeople’s FB page “it is romantic though. And time to talk to the family instead of watching TV!”

And Jenny Mills wrote nostalgically: “My grandparents lived on a farm in Rustenburg and for electricity they had oil lamps and candles. Cooked on a coal stove. I just loved it. Today I still love candle light and oil lamps.”

Andry Springhall said “look on the bright side of things – if we can get the strikes and power failures to be at the same time, we save ourselves millions on the economy.”

One of the more popular jokes being shared at the moment is: #Eskom has good news and bad news, bad news is the shit is going to hit the fan!…Good news is the fan is off due to #loadshedding. 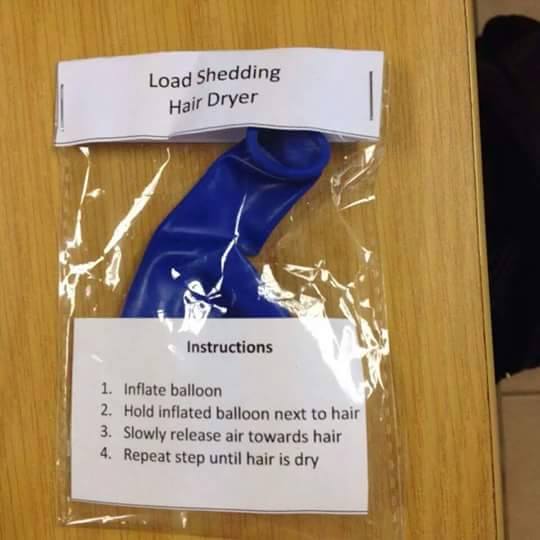 In the midst of arguments blaming old and new governments for the power cuts, Canita Domingo said “as much as I dislike the present government I would rather live in darkness for the rest of my life than have the old one back. Four hours a day now, is nothing compared to the 24/7 back then with the old government.

“I remember as a child having to go knock on Mrs Wessels’ (rest her soul) door for some ice cubes on a hot summer’s day to cool us down. The sound of the cubes hitting the enamel jug used to get my siblings so excited when I got back. Mrs Wessels never got tired of providing us with this pleasure. In fact her old round fridge could not keep up with our demand. In winter we could put our jelly out on the chicken coop to set overnight. ‘N boer maak a plan mense!”

WANT MORE? View Ursula’s fantastic video on how to plan for Loadshedding!