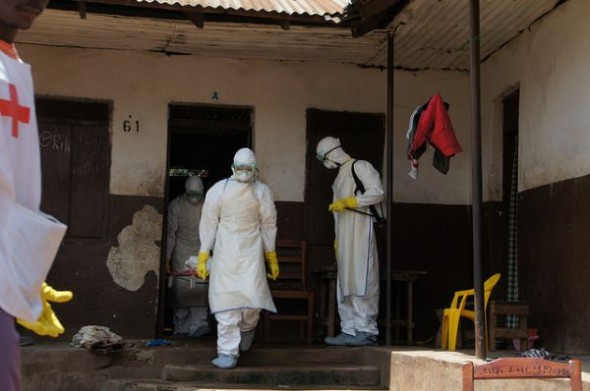 South Africa has deployed its first batch of trained healthcare professionals to work in Sierra Leone, in an effort to help contain the spread of the Ebola Disease Virus in the country and other parts of West Africa.

A team of healthcare professionals comprising one medical doctor and about 10 professional nurses were recruited and trained by the Right to Care organisation, and will leave for Sierra Leone tomorrow (Friday). (There are already some selfless individual South Africans working in Sierra Leone.)

Right to Care Chief Medical Officer Dr Pappie Majuba said on Monday there was a lot of response from many South African healthcare professionals who wanted to assist in Sierra Leone, but they could not make part of the first team because of paper work. (Right to Care has facilitated the deployment in collaboration with the national Department of Health.)

Amongst those leaving for West Africa tomorrow is Ishmael Mbulawa (27) who works as a professional nurse.

Mbulawa said he is looking forward to the journey to save lives and that he had no fears or thoughts of contracting the disease, as he will be taking all precautionary measures.

He said he prepared his family and friends emotionally, prior to receiving training, and hoped they would be proud they have a representative in the team.

“At the end of the day, I am doing this to save people’s lives and contain the disease,” said the father of a three-year-old son.

He added that he is looking forward to the experience as it will be his first time working in a life-threatening environment.

His female colleague, Neo Mokone, said when she first heard about the Ebola outbreak last year in Liberia, she felt a need to go help in the country.

“I felt a need to go and help as an African and a nurse. I believe that nursing is my calling…we need to contain the disease before it breaks out even further to other countries,” said the 28-year-old Mokone.

She pointed out that if people had not been so fearful of the disease when it first broke out, it would have been contained quickly.

Three days ago she uploaded an inspirational photo-quote to Facebook with the words “If your dream is both terrifying and amazing, then you should definitely pursue it.”

Mokone, Mbulawa and the rest of the team will be in Sierra Leone for eight weeks.

In a media briefing in Johannesburg Dr Majuba said the team “will be working with professionals who are already on site in the country. When they return to South Africa, another team will be sent to replace them…it is an on-going process, and the number of professionals will be determined by the response and need.”

He said this was part of South Africa’s effort to respond to a call by the African Union to help Sierra Leone, Guinea and Liberia contain the disease.

Majuba said healthcare professionals were also briefed about the background of the country to further prepare them with regard to the atmosphere in the country.

He said the healthcare workers received intense training in South Africa, and will continue to receive further training in Sierra Leone before they start treating patients.

He added that measures have been put in place to ensure that the chances of healthcare workers contracting the disease are almost 0%.

The latest World Health Organisation (WHO) statistics show there have been more than 21,000 reported cases of Ebola in Guinea, Liberia and Sierra Leone and more than 8,300 deaths. According to the statistics, 678 healthcare workers are known to have contracted Ebola and 382 of them died.

The statistics also show that Sierra Leone is the epicentre of Ebola with more than 10,000 known cases.

Majuba told SAnews that in any Ebola-hit country, only one Medical Doctor and a maximum of 10 nurses are allowed to work in the centre at a time. He said professionals are allowed on site with their protective clothes for a maximum of one hour per session.

The professionals take intervals of two hours in between working hours, as the protective clothes are said to be too warm and leave them sweating.

Majuba said there will also be a professional responsible for regularly checking all healthcare workers who work at the Ebola treatment facilities, every day when they knock off duty. He said should there be any suspected cases of a worker contracting the disease, he or she will be isolated and attended to.

Help Win the Fight against Ebola

Last week, the African Union also launched a resource mobilisation drive through its telecommunications sector, which enables anyone in participating countries to contribute US$1 by sending STOP EBOLA to a specified country code.

The codes in operation are: 7979 for Botswana, Burundi, Central African Republic, Ghana, Kenya, Lesotho, Madagascar, Rwanda, Tanzania, Zambia and Zimbabwe, 40797 in South Africa, 6969 in Chad and 1919 in Senegal.

Donations may also be made via the website www.africaagainstebola.org. The AU said by donating, each person will be helping to win the fight against Ebola. The continental body aims to send 1 000 health workers to Liberia, Guinea and Sierra Leone.