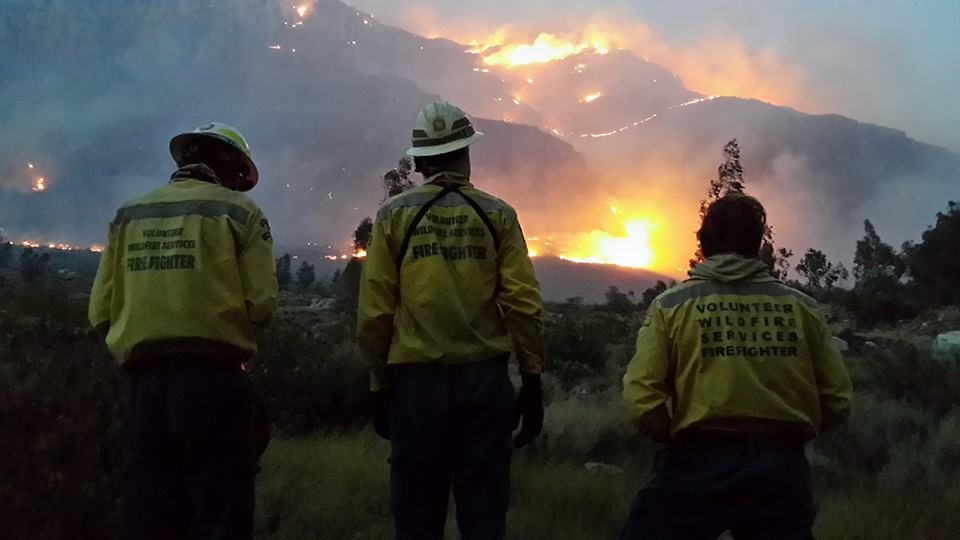 Volunteer Wildfire Services (VWS) has requested food for the firefighters and donations of paper plates and other items needed to fight the advancing fire in Jonkershoek Nature Reserve, near Stellenbosch. VWS reported less than an hour ago that the fire is spreading towards the mouth of Jonkershoek Valley. (Please see update for Thurs 12 March below.)

On Monday afternoon 150 firefighters were deployed to fight the runaway blaze and by yesterday it had been contained.

However the fire flared up again in the late afternoon and this morning VWS reported that the team has been doubled to 300 firefighters on the ground.

According to an update from Cape Nature at 10 am (SA Time), the South Easterly wind has pushed the fire towards the Stellenbosch area, and has also moved closer towards the Helderberg Basin which has put some farms potentially under threat.

The aim today is to conduct a back burn in the Stellenbosch mountains to reduce the size of the flammable area and bring the blaze under control. This morning VWS thanked Stellenbosch for its support last night and said that fire crews “continued to cut fire breaks throughout the night in an attempt to contain the fire”.

Cape Nature reports that approximately 2,900 hectares of alien vegetation and fynbos has been burnt so far. Unfortunately, there is an ecological concern as the last fire that took place in the area was in 2009. Many of the fynbos species in the area need between 12 – 20 years to produce enough seed to sustain the population after the fire.

The teams fighting the fire include Stellenbosch Municipality, Cape Winelands, Cape Pine, Working on Fire, the Volunteer Wildfire Services and contractor teams on the ground.

Due to heavy smoke across Somerset West, Stellenbosch and surrounding areas, motorists are requested to switch on headlights, be patient and extra cautious when driving.

The fire is currently blazing high in the mountains and there is no immediate threat to life and property in the area.

Update 13:00 (SA Time): Stellenbosch University confirmed that staff and students of Maties Sport, the Department of Sport Science and Stellenbosch Gymnasium, as well as workers and farm animals on the Welgevallen experimental farms were evacuated earlier today as a precautionary measure.

According to a press release on the University’s website, the fire was brought under control by 1 pm and there was no immediate danger to any buildings. A contingency committee has been formed to monitor the burning fire on the slopes of the Stellenbosch mountain above Coetzenburg.

Update Thursday 12 March 2015, 10.30 am (SA Time): Firefighters worked extremely well overnight to contain the majority of the fire. Certain sections of the fire remain out of control and the focus today is to contain those areas in the Banoek Valley as well as the Helderberg Basin. On Wednesday the firefighters conducted a back burn to keep the fire from spreading to Stellenbosch and this was largely successful as the town was at no point under threat.

Over 450 firefighters, including aerial support and ground crews from CapeNature, Cape Winelands District Municipality (CWDM), Cape Pine, Working on Fire (WoF), Stellenbosch Municipality, City of Cape Town and Drakenstein fire departments and the Volunteer Wildfire Services (VWS) have been actively working to contain the blaze which is still burning high in the mountains.

There is no immediate threat to life and property in the area.
Please note that the Jonkershoek Nature Reserve is closed until further notice.

Feed a firefighter – There are currently more than 300 firefighters on the ground.

JONKERSHOEK ROAD IS CLOSED TO THE PUBLIC. PLEASE ALLOW EMERGENCY VEHICLES ACCESS TO THE SCENE. THE JONKERSHOEK NATURE RESERVE IS CLOSED until further notice. Please avoid cycling on Jonkershoek Road. The public is also requested to stay clear of the hiking trails and the general Coetzenberg area in Stellenbosch.