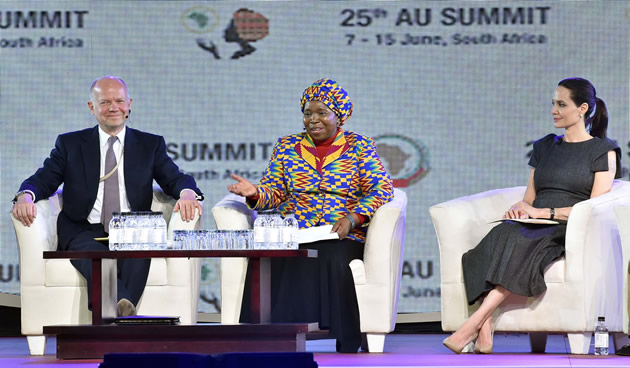 International celebrity and UN Special Envoy for Refugee Issues, Angelina Jolie was one of Twitter’s hottest trends this weekend after appearing at the 25th African Union (AU) Summit at the Sandton Convention Centre in Johannesburg, on Friday. (Watch video below.)

Speaking at the ‘Women, Peace and Security’ luncheon, the humanitarian called violence against women a “global epidemic” which is treated as far too low a priority.

With this year’s theme being “Women’s Empowerment and Development towards Africa’s Agenda 2063″, the mother of six said “women and girls are bearing the brunt of extremists that revel in treating them barbarically”. She said it is “inextricably linked to our overall failure to prevent and end conflicts worldwide, which is causing human suffering on an unprecedented level.”

Jolie was joined on the panel by British foreign secretary William Hague with whom she co-founded the Preventing Sexual Violence in Conflict initiative, AU chairperson Nkosazana Dlamini-Zuma and Senagalese activist Bineta Diop.

Jolie said that a team effort is required to empower more women, explaining “we need policies for long-term security that are designed by women, focused on women, executed by women – not at the expense of men, or instead of men, but alongside and with men.”

The 40-year-old said: “There is no greater pillar of stability than a strong, free and educated woman, and there is no more inspiring role model than a man who respects and cherishes women and champions their leadership.”

In the ‘Celebrating Women in Africa’ Gala Dinner later that night, its host South African Minister in the Presidency for Women, Susan Shabangu, criticised the current criteria and funding institutions in Africa, accusing them of not being women-friendly and in some cases contributing deliberately to the marginalisation of women.

She said as long as this continued, African countries will “operate at half capacity.”

The Minister pointed out that research shows women produce more than 80% of food in Africa but own approximately 1% of productive lands.

“We cannot continue to limit women’s economic contribution to small and informal businesses,” she said. “The time is now for women to be integrated in the mainstream economy. The empowerment of women is not an act of charity.”

In his opening remarks  at the AU Fundraising Dinner on Saturday evening, President Jacob Zuma said the AU looks forward to a “journey towards a united, non-sexist, industrialised and prosperous Africa.”

Addressing industry and business leaders, Zuma said the business sector is a “critical roleplayer in the story of the rising Africa”, an Africa which becomes self-sufficient and a major global business player.

The South African President said that in order to implement the AU’s plans financial resources were particularly needed and that the evening’s fundraising was part of a “committed African effort towards domestic resources mobilisation” and “taking ownership of our destiny”.

The President said the AU looks forward to the “period when African companies control and own major stakes in reputable and large companies outside our continent.”

At the New Partnership for Africa’s Development (NEPAD) session on Saturday, Zimbabwean President and AU Chairperson Robert Mugabe praised NEPAD for its excellent job so far in working to eradicate poverty, promote sustainable growth and accelerate the empowerment of women in Africa.

As Jolie said at the luncheon the day before “think what it would mean if the 54 nations of the African Union press as one toward full rights and opportunities for women, not just for this great continent but for the world.”