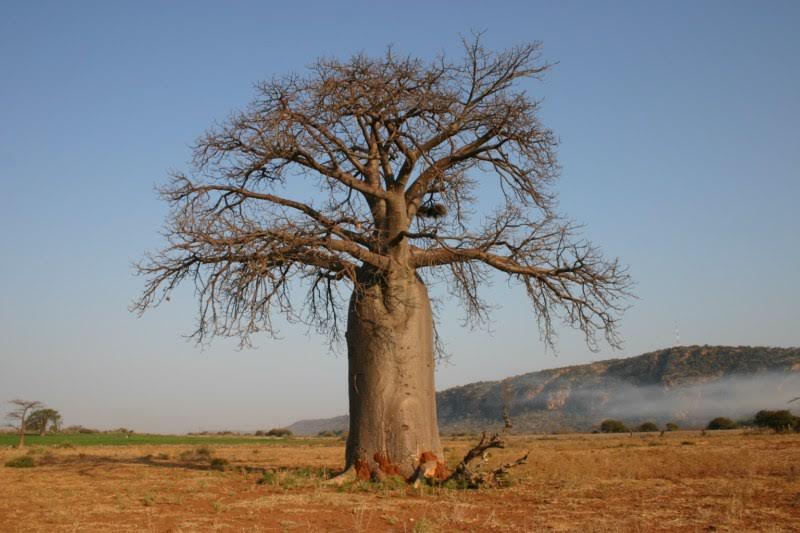 The iconic, mysterious and magical African baobab, probably the most identifiable and prehistoric-looking tree on earth, suddenly seems to be coming into its own in the 21st Century. Several companies are getting the name of the tree out there – literally – selling products that take advantage of its health and medicinal properties. One company even promotes the hashtag #MakeBaobabFamous. Even though many of us from South Africa know the tree well, you may not realise that it’s a fabulous source of nutrition and antioxidants, providing food, clothing, shelter and water for humans, animals and other parasitic plants.

The bark is fire-resistant and used for rope and cloth. Leaves make condiments and medicines; and the fruit is edible, full of vitamin C and can be used to make beer and other beverages.

The tree can thrive in harsh desert-like conditions for a thousand years, and according to a recent article by ‘National Geographic’ it has an estimated potential international market of at least a $1-billion…which could benefit millions in Africa.

[quote_center]”There’s no such thing as a baobab plantation; every tree is community-owned and wild.”[/quote_center]

ECOPRODUCTS, a company based in Limpopo, works with local women to sell and promote the edible powder and body oil that are made from the tree. The fruit pods are broken open to reveal small hard dark seeds embedded in clumps of a creamy coloured dry fibrous powder. The seeds are separated from the powder, and cold-pressed to produce the rich oil which is prized by cosmetic companies for its skin-nourishing qualities.

Because the powder is already dried inside the pod, no further drying or processing is required so it retains all of its extraordinary nutritional qualities.

[quote_center]…only harvests the fruit once it has fallen to the ground, ensuring the trees are not damaged in any way during the harvesting process…[/quote_center]

Ecoproducts says it only harvests the fruit once it has fallen to the ground, ensuring the trees are not damaged in any way during the harvesting process.

British company ADUNA, meanwhile, has been making baobab products since 2012, with pods gathered in northern Ghana and Senegal, two of the 32 countries in Africa where baobabs grow.

According to Aduna, the nutrient-dense fruit of the Baobab has the potential to transform millions of lives. “There’s no such thing as a baobab plantation; every tree is community-owned and wild. Ten million households can supply this fruit from a crop that is so abundant it goes mainly to waste.”

The company has made it as one of the top three finalists in the Virgin Media Voom ‘Pitch to Rich’ competition in the Grow category…putting them in line to win either the top prize of a £250,000 marketing campaign or runner-up prize of a £100,000 marketing campaign. So either way Aduna is on its way to making its #MakeBaobabFamous dream come true…and transforming their business “and at the same time millions of lives”.

The benefits of baobab powder… As EcoProducts points out, baobab powder, which has a tart sherbety apple-lime flavor, has numerous benefits:

It can be added to drinks, smoothies, cereals and desserts. Aduna also sells energy bars and a baobab superfruit powder.

EcoProducts has also started the Baobab Guardians project, which involves Venda community members who nurture and care for baobab seedlings until they are strong enough to survive in the wild. The Boabab Pre-school program supports early childhood development in village preschools. Aduna too is working with a dozen underpriviliged communities to help turn the little-consumed food into a trending superfood…