Photos from Plot 111, Moloto, Pretoria. June 2015. South African writer, broadcaster and photographer DAVID BATZOFIN was invited by a group distributing food, toys and clothes to this little-known community. This is his account… This husband and wife couple are the “caretakers”. Marius used to work for Transnet, but left there several years ago.

Both of them are currently employed by a family member…But they are two of the lucky ones in this community. They have been in and out of Plot 111 several times as they have had to move to where work opportunities open up. They live here with their children and grandchild.

From my interactions with members of this community, it seems that almost all of them are Afrikaans. Not that they were not willing to speak English, they were better able to express themselves in their mother tongue.

Marius has strong views on South Africa. His biggest wish?

That we could all learn to respect each other! Members of the Plot 111 community.

I was part of a group that had come to distribute food, clothing and toys. The group that I came with did not want any publicity.

Marius had already started the fire to heat chicken stew and rice that the group had brought for distribution
These communities, and there are 72 such camps within a 50 km radius of Pretoria, get no government assistance.

They also seem to attract very little publicity. I am not certain if that is intentional or not. I, for one, see these settlements as South Africa’s “secret”… The lady with Martie runs the soup kitchen. She was not having a good morning and I did not get to speak to her. However, I was told that she makes certain that the children have a warm meal before they leave for school.

Not an easy task when there are limited water and electrical resources. But, like many of the people I spoke to, she does what she can.

Some of the accommodation options that I was shown. Tents are home to some of the younger members of this community.

In the cold winter months in Pretoria, I imagine that this is NOT where you want to be sleeping. There are also several caravans that the owner of the property has supplied. These are occupied by families. Just because money and material possessions might be in short supply, it does not mean that you have to be dirty. There was washing outside most of the dwellings that I walked past. This “house” has a flush toilet. Most of the community has to use communal facilities.

The house layout is very interesting… On the left is a bedroom and to the right a lounge. The caravan is “built-in” and is home to some family members. Deon Fortuin, is the only “coloured” member of this white community. There are six members of his family. Although he has a driver’s license, he does not have the money for a Public Driving Permit and is therefore unable to get employment.

So he stays at home while those family members who work, go off to earn a living.

The pot in front of him doubles as a cooking pot as well as heating bathwater. The family baths in relays as they return, and when the ablutions are complete, dinner is cooked. There are LOTS of dogs of various shapes and sizes. All of them look well fed and disease free. There is a “school” on the property. Burrently it has very few students and no “real” teachers. One of the community has been trained in the basics, and she is now passing that knowledge on.. Lunch is served…chicken stew and rice. The youngster in the middle is Pieter. He seems to crop up in a lot of my pictures. Not sure if he was “stalking” me… The young man in the ABSA jersey was one of the few that spoke English. He lives here with his family and he “dropped” out of school when he failed Grade 11.

He was going to rewrite the year, but his Dad died on the day that school started, so he never went back.

The fellow with the saw is Terrence, one of Martie and Marius’s children.

These are some of the people that I interacted with. Most of them were happy to have their pictures taken and tell me their story. Mom and daughter landed here because of one bad decision that was made a few months back.

“My life changed in 5 seconds…” Marietjie told me.

As with all those I spoke to, they were not looking for sympathy. They were looking to be heard. All of them refer to the world beyond the borders of the camp as the “outside”…where they are often invisible or ignored.

There is no reason that because of their circumstances, they should be treated with less respect. Any one of us could end up in similar circumstances.

Marietije and her daughter both teach at the school on the property. I asked Anika what one of her goals might be…”Getting my matric,” was her reply. And on a positive note? Mom answered…”it is onwards and upwards from here…”

Education was a recurring theme throughout my visit. Eddie Roodtman’s story was the most poignant for me. He is the the most recent arrival here at Plot 111.

Although he has been here less than a month, he had spent six months living on the streets. His biggest fear, while sleeping rough? “I never knew if I would be attacked while I slept…I had my possessions stolen and death threats!”

He is a religious man, but even though he trusts in a higher power, he is actively looking for work. Have there been any positive aspects to your present situation? “Yes, I have become closer to my family that I have ignored for the past two years”. Two tents had been donated,and he was able to get one. I hope that his new accommodation will be more comfortable than the accommodation that he had prior to our visit. Billy is currently looking for work and is positive about his present situation. William is a panel beater, and is currently working. Lucy is looking after Pieter at present while she looks for work. Some of the items that were brought for distribution. Stations were set up for each of the goods (books, toys, shoes etc). They were strictly controlled so as to make certain that everyone got equal access to the goods.

One young boy did complain to me that his brother had got several toys, and he had only received one. I chatted with his dad, who said that he would make certain that they would share.

These scooters have been around for decades, and probably will be for many more.

What did I learn from my exposure to a segment of our population that I never knew existed?

I would like to thank the community at Plot 111, for allowing me to spend time with them. You have certainly opened MY eyes and I am hoping that this posting will open the eyes of others.

All photos are copyright DAVID BATZOFIN and are published on SAPeople.com with his permission.

How to Help:
If you want to become involved in the plight of these white settlements, PLEASE email me david.batzofin@gmail.com and I will put you in contact with the correct people. 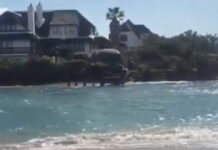