Former England halfback Matt Dawson, together with the Battersea Ironsides rugby team, has created the Hakarena, to rival the All Black’s legendary Haka. It’s in jest of course.

Matt claims that the pre-match ritual is the advantage that New Zealand has over England, winning the match with its Haka before the rugby has even begun.

The Hakarena is performed to the beat of the famous 1994 Makarena by Los del Rio. Jacamo Clothing, the company behind the video, uploaded it two days ago and urged English fans to “Do the #Hakarena and show your support for England…”

It’s been met with mixed reviews in New Zealand. Some have seen the lighter side, but many have described the video as “cringe-worthy” and “offensive”. One media outlet in New Zealand, TVNZ.co.nz said Matt had “disrespected the All Blacks’ haka in true pompous Pommy style” and Stuff.co.nz said he “mocks” the All Blacks with the Hakarena.

Yesterday Jacamo responded with a comment on their Facebook page stating: “We’d just like to say that we think the Haka is awesome! In no way are we trying to disrespect it. We’re just trying to show how silly an English version would be in comparison.”

Last month South Africa’s Amawheelaboys’ performed a more inspiring version of the Haka at the opening match. Check out the Shaka below…once you’ve watched the Hakarena!

Watch Video – Do the #Hakarena

If you haven’t seen it yet, here’s a more inspiring version of the Haka, as performed by the Amawheelaboys: 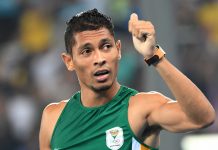 Wayde Van Niekerk is Back on Track!