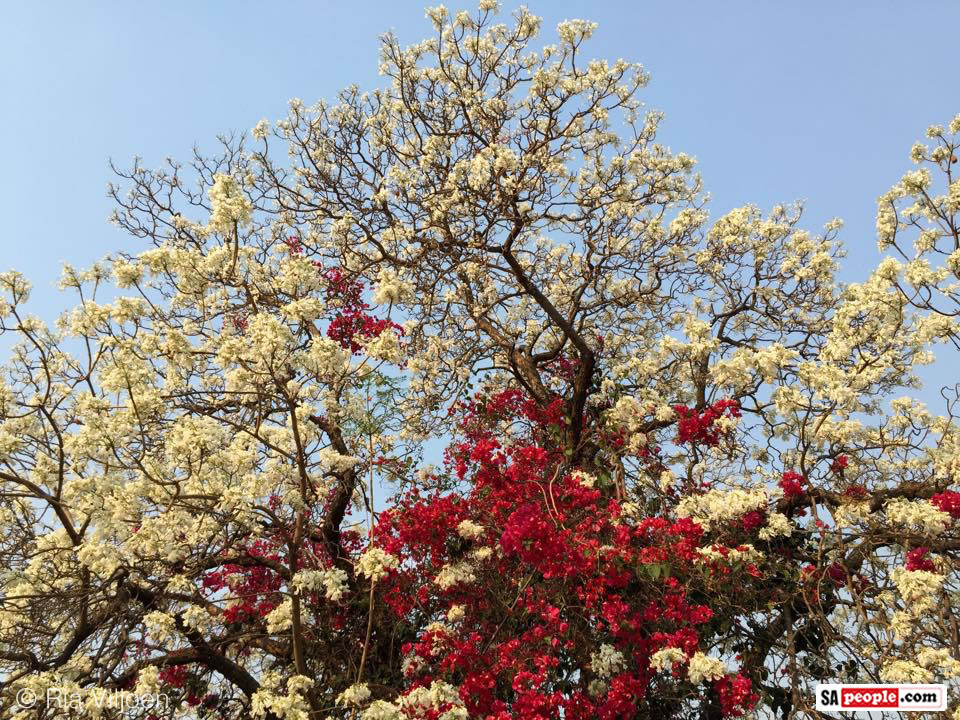 It’s not just the purple jacaranda trees that are brightening the roads and pavements of Pretoria. The white jacarandas are pretty spectacular too. RIA VILJOEN captured the photos on this page of the white blossomed trees blooming in Pretoria, otherwise known as Jacaranda City. The trees with pure white flowers instead of purple – about 100 of them – are planted on one side of Herbert Baker Street in Groenkloof, Pretoria. “There is a lovely red bougainvillea that creeps up in the one white jacaranda tree which on its own is an awesome almost red and white Christmas show off…” says Ria.

The trees are apparently sterile, but are a cultivar for the purple jacaranda trees. “The white petals look like a carpet and it smells pure…and good and clean and fresh. “This phenomenon is a real privilege we here in Pretoria can fully enjoy.” It’s so beautiful that people from around the country make the trip to view the beautiful flowers in bloom. In fact the trees – particularly the purple ones – even attract tourists from Japan where Jacaranda City is more famous than Table Mountain.

The jacarandas are believed to have been first imported to South Africa from Brazil in about 1829. They are now visible in other cities around the country, including in Durban where they are thought to have been introduced in the late 19th century by the Botanical Gardens curator James Wylie. His granddaughter Gayle Smith told SAPeople: “My grandfather was sent from Kew Gardens in the UK to the Durban Botanical Gardens. His job description was ‘gardener’. He brought other plants too.”

Wylie is credited, according to Wikipedia for introducing the jacaranda trees along the streets of Durban and Pietermaritzburg after he moved to what was then Natal (now KwaZulu-Natal) in 1882. He became curator in 1904. To view more of the purple jacarandas in Pretoria, click here.