Sir Richard Branson and an all-star team of Chinese celebrities and global wildlife ambassadors are chewing on their fingernails…in a powerful new ad campaign speaking out against the purchase and use of rhino horn.

The campaign – in Mandarin and English – was created by WildAid in partnership with African Wildlife Foundation to target consumers in East Asia. Advertising company OgilvyOne Beijing has joined WildAid in the pro-bono campaign, “Nail Biters” to aim at the root of this social behaviour and combat long-held false beliefs about a rhino horn’s properties.

In a personal blog post, Branson said he and the team aim to “expose the #rhino horn trade for what it is: fraud, perpetuated by criminals who are decimating the world’s majestic rhinos.”

He said “most of this spike in wildlife crime is driven by increased consumer demand in China and Vietnam, where rhino horn is used primarily as a remedy for all sorts of ailments, even though it has long been shown that it doesn’t have any medicinal properties whatsoever.

“It’s a sad story of superstition and misinformation on one end of the chain that is responsible for mass slaughter and suffering on the other.

“I’ve long argued that the illegal wildlife trade must be addressed along the entire supply chain.

“Strengthening the capabilities of those brave rangers fighting what looks like a losing battle in many of Africa’s national parks is part of the solution, and it has to go hand in hand with better governance, greater accountability, and more effective law enforcement.

“Yet, supply reduction can only work when we tackle demand at the same time. In other words: only when the buying stops, the killing can, too.”

He said while it is a challenge, “thankfully, people are beginning to understand that rhino horn is in essence nothing more than keratin, the same substance that human hair and nails are made from.”

Branson admitted it’s not the most flattering photo shoot he’s ever participated in, “but it certainly drives home the message…if you think that rhino horn is a magical substance that can cure disease, you may as well be chewing your toe nails.” 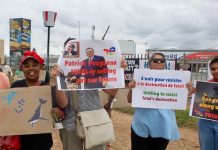