Check out this awesome footage of a leopard in South Africa returning to a spot in the bush to retrieve his precious – and rather prickly – meal…a porcupine. Stan Sanetra‎, who hails from Kuilsrivier (Kuils River) in the Western Cape, captured the footage during a trip to the Kruger National Park in October last year.

“Our whole family was treated to this beautiful leopard coming out of the bush, and collecting its kill,” Stan told SAPeople. “We think the porcupine quills did some damage…”

According to private safari guide Craig Doria it is common for lion and leopard to prey on porcupine. “I’ve seen it several times,” he says. “And sometimes they get spikes in their mouths, which do sometimes get infected.

“Stories about lions and leopards eating porcupines have become embellished and there’s an urban legend that the quills infect and kill them every time. But that’s not true. Often the predator is just fine. However, it is easy for infection to happen – the quills are said to have microscopic barbs on them that make it difficult for them to come out.”

Porcupines are known to be hazardous meals for wildlife… Just last year an African Rock Python in South Africa made world headlines when it came to a “prickly end” after trying to consume a porcupine. 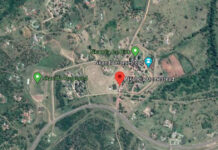