Jamie Joseph from Saving the Wild is on a mission: to fight against the poaching that is bringing our rhino to the brink of extinction, to stamp out the corruption that’s enabling these killings. She’s already managed to convince South Africa’s incredible Public Protector Thuli Madonsela to conduct a preliminary investigation into her corruption findings.

Jamie’s mission is a dangerous one. Difficult. Lonely. Life-threatening. And one which is so necessary. Our rhino need her voice. Someone who is brave enough to stand up and talk – shout – on their behalf. Someone who represents what we would all like to do if we had the time, the money, the courage.

But while Jamie has the courage, her life is still at risk. And she does not actually have the money. Especially now for protection, now that she is stepping up her fight against corruption within the court systems. Taking on a syndicate.

“At previous court appearances he’s been known to arrogantly walk past witnesses and slur that he will “never stop poaching”. And then on Monday we went head to head,” she reports. Gwala’s trial date has been set for 5 September.

Jamie says: “Whilst Gwala does believe he is above the law, with your help I am on a mission to prove him wrong. I’ll be reporting from the trial while at the same time I will continue to work on exposing corruption that is fuelling the rhino crisis.”

She says: “I am the keeper of secrets, at least until after Public Protector Thuli Madonsela publishes her findings regarding my case, ‘#‎corruption enabling poaching’ – and sometimes those secrets manifest themselves into nightmares. If you knew what I know about Gwala you would probably also be haunted by demons.”

Jamie will need to raise funds for the trial months September and October to cover her security, travel and accommodation. If anyone would like to contribute to that fund please email her on: wildlifejustice@tutanota.com (highly secure and confidential).

Her organisation, Saving the Wild, is a registered charitable trust.

When we spoke to Jamie on Monday evening, she had just been on the scene of another poached rhino. It’s an exhausting mission she is on. A heartbreaking one. But one which must be fought.

“Right across ‪#‎KwaZuluNatal‬ rhino owners and rangers grit their teeth as they tell me about the rhinos they have lost to Gwala’s poaching syndicate,” she says. “It has been said that 80 percent of the horns in the KZN province move through his hands. That’s at least 200 butchered rhinos since 2012.

“When I look into Gwala’s eyes all I see is blood. And we must stop at nothing to protect that which we hold most dear. ‪#‎2016YearOfTheRhino‬ ‪#‎ThuliMadonsela‬ expose ‪#‎corruption‬ enabling ‪#‎rhino‬ ‪#‎poaching‬.”

She says that “not since the dinosaurs died off 65 million years ago has the natural world taken such a beating. If we lose the war on poaching, if we lose our iconic rhino, a species that has survived 50 million years, our failure will go down in the history books as the generation that threw away the ark.”

Jamie is doing her utmost to prevent that and make a difference.

If you would like to help Jamie make that difference and save our rhino, please email Jamie on: wildlifejustice@tutanota.com (highly secure and confidential). 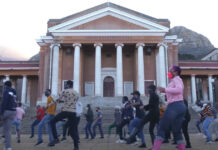