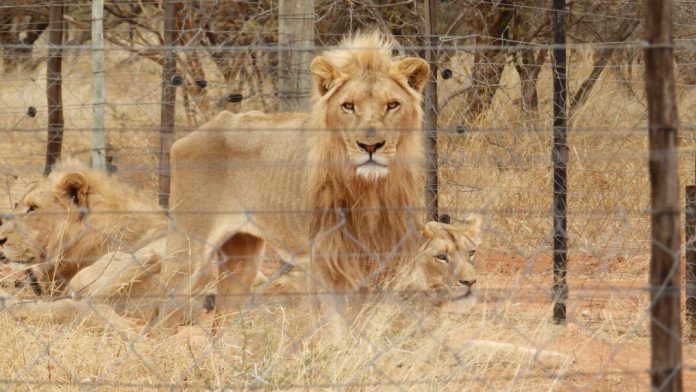 A lion conservation group has come out against a lion-breeding and cub-petting facility in Limpopo where pictures were allegedly taken of lions that are starving, and it has been suggested that as these facilities come under increasing pressure to stop their activities, a similar fate may face as many as 8,000 captive-bred lions in South Africa. Drew Abrahamson of Captured in Africa said – in a message posted on Facebook – that the breeding farm and hunting farm where the starving lions were reportedly photographed and a coffee shop in Alldays where cubs were brought to be petted (all three owned by the same person) were just “the tip of the iceberg”.

Many lion advocates are fighting for an end to canned hunting facilities, where animals are bred to be hunted, and the petting of cubs, which do not develop survival skills and land up being canned hunting fodder too.

In her “Call to Action” message, which was shared hundreds of times before it was mysteriously deleted, she said, “You wanted to know what is going to happen & what is happening to captive ‪#‎Lions‬ since the breeding, canned hunting industry is starting to slow down!

“We believe this is the tip of the iceberg & there is a lot more to come out & I am convinced many of the breeders couldn’t give a damn about the correct feeding of their Lions & are literally leaving them to starve. This may or may not be the case in this instance…

“A few days ago I received these images of captive lions on a breeding farm up in Alldays in Limpopo Province. These Lions belong to a man called Walter Slippers who runs 3 operations, a breeding farm, a hunting farm & a coffee shop in Alldays called Toeka Plaas Kombuis, where the cubs go to be petted…& then shipped back to the farm. The breeding & hunting operations are called Ingogo Safaris – www.ingogosafaris.co.za

“Once the information was received, I made contact with some go to people & over the past days a few things have taken place. Isabel Wentzel from the NSPCA wildlife division was on it in super fast time & sent an inspector through yesterday who visited all 3 of the properties & Isabel has kept me updated since! A vet has been ordered to go through to the premises on Monday to do full vet checks on the lions…which there are approximately 250. NSPCA have given them a list of veterinary & food.

“The info that was given to NSPCA inspector was that the Mr Walter Slippers suffered a heart attack & hasn’t been able to feed & look after his lions properly??? You need to ask why some are in worse condition than others. Things don’t add up for me & I think there are stories being spun.

“It is time for attention to be brought to the breeders/hunters individually, so they cannot hide behind an industry as a whole & remain nameless & faceless! It’s time they face the music with regards to their exploitation.

“I think it is time the various Nature Conservation offices in the various Provinces, start changes the permit granting process & not dish permits out to individuals so quickly. There needs to be more commitment from Nat Con offices & they do need to be held accountable for the welfare or lack there-of, of any wild animal in captivity!! It is their responsibility & duty…

“What you can do is e-mail Limpopo Nature Conservation & ask them to stop issuing permits to captive breeding facilities, including display & zoo permits because everyone & their aunty is opening up some sort of petting facility.