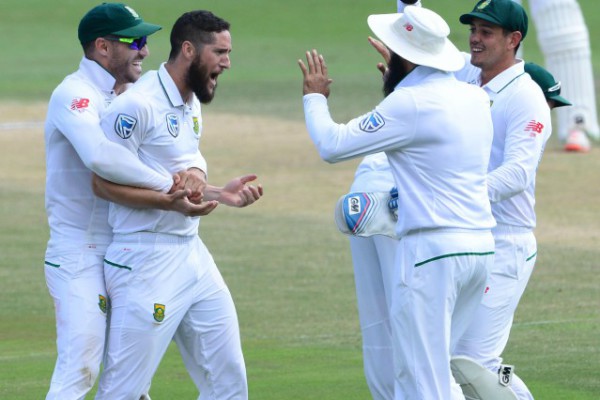 Cricket South Africa said it all when they tweeted: “Brilliant effort manne! Congratulations on the series white wash.” The Proteas’ pace bowling quartet claimed 16 wickets between them on day three to bowl South Africa to an innings and 118 runs victory over Sri Lanka in the final Test match at Wanderers Stadium on Saturday, and complete a 3-0 series clean sweep with more than two days to spare. The wickets where shared between all four with the recalled Wayne Parnell taking 6 wickets in the match while new cap Duanne Olivier took 5 wickets on debut.

Kagiso Rabada finished the series with 19 wickets and Vernon Philander with 17 while the top order batsmen did a repeat of the previous series in Australia with five different batsmen scoring centuries. One of them, Dean Elgar, finished leading runs scorer in the series (308 runs at 61.60) to be named Player of the Series.

JP Duminy was named Man of the Match for his innings of 155 which contributed to the 292-run partnership with Hashim Amla to set up the platform from which the bowlers were able to strike for victory.

A feature of the final day’s play was the catching of the home side with Duminy and Faf du Plessis both pulling off brilliant efforts.

Dimuth Karunaratne delayed the inevitable with a half-century in the second innings and was one of only three half-centuries that Sri Lanka made in the series such was the dominance of the South African bowlers.