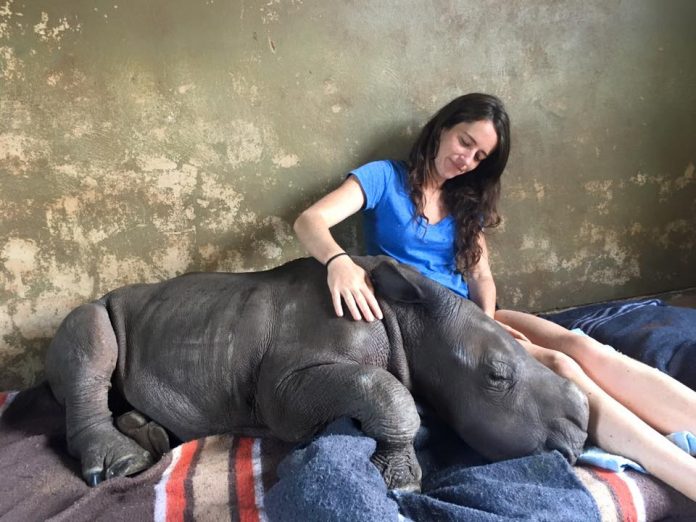 An orphaned little rhino in South Africa – named J’aime, in tribute to the poached rhino in a French zoo near Paris – is happily thriving, according to The Rhino Orphanage founder, Jamie Traynor.

J’aime was herself the survivor of the horrific mutilation and killing of 16 rhino across South Africa, in the space of two days, just over a week ago. Rhino are being killed mercilessly for their horn which some people in Asian countries have been conned into believing have medicinal properties. Horn is in fact nothing more than keratin (which our nails are made of).

The little 4-week-old calf was left, after the attack, with no mother to protect and raise her… so she was sent to The Rhino Orphanage, where she is under the watchful care of a dedicated team.

On Friday Jamie reported that “during her ordeal J’aime suffered three stab wounds to her back, but they’ve been seen to by vets and we will monitor their healing closely”. She said the first few days in a new environment are never easy for a rhino calf, but that the orphanage was doing everything in their power to keep her a healthy, happy rhino.

“For now, that means getting ready to spend the night by her side, so she’s knows she’s not alone.”

Yesterday Jamie posted the happy news that: “Gorgeous little J’aime is doing very well so far! We managed to weigh her yesterday and she weighs 100kg!

“She’s drinking milk every 2 hours day and night. She loves to wake us up at night by nibbling on our arms to let us know that she’s hungry.

“Her wounds are looking good and we’re cleaning them 3 times per day.

“She constantly seeks our comfort and will lie as close as possible, most of the time that’s on my lap!”

The rhino situation has become so ludicrous, led by criminal syndicates who are only after money, fed by a demand from greedy snobs and scared sick people who will believe anything, and enabled by certain government officials who are either turning a blind eye or are benefitting from the illegal rhino horn trade. A Czech zoo has made the bold decision to dehorn all 18 of its rhino in order to keep them safe.

In the meantime, thank you to organisations like The Rhino Orphanage that rescue the survivors!