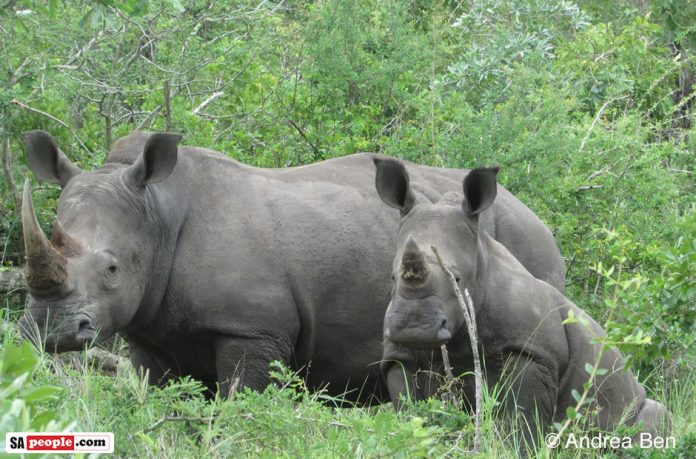 SKUKUZA – Since the beginning of March, 16 rhino carcasses have been found in the Kruger National Park (KNP)… and it has also been revealed that the Kruger is tightening security to prevent poachers entering the park as guests. Only three of the 16 dead rhino that were found still had their horns intact. Post-mortems will be done to determine how they died – possibly from old age, disease or in a fight.

He said the 16 rhino carcasses had been found between 4 and 22 March, with two being older than two months.

The media were shown one carcass which had been discovered just a few days ago. It had already started to rot, and when opened a bullet was discovered.

During the media tour, SANParks Chief Ranger Nicholas Funda also said that the Kruger is tightening security at its southern gates in an attempt to protect rhinos and prevent poachers from accessing the park.

Funda said the park has picked up that some poachers enter the area as guests and get dropped off.

“We realised that the gates became our weakest point… Some of the poachers are paying at the gate as guests. For example, when they come in, there are four of them in a vehicle and on the way out, there is only the driver.

“We call them ‘drop-offs’. Drop-offs are a problem because we can’t track their spoor in the veld,” Funda said.

The new security measure is expected to be implemented in about a month. The gate access control system will be implemented at the northern gates at KNP at a later stage.

According to figures released recently by Environmental Affairs Minister Edna Molewa, a total of 662 rhino carcasses were found in the KNP last year, compared to 826 in 2015. This represents a reduction of 19.85% in 2016.

A total of 148 firearms were seized inside the park in 2016, and six just outside the park.

Meanwhile on Thursday, SANParks K9 Manager Johan De Beer said his unit was successful in apprehending poachers at the KNP and it was one of the largest anti-poaching units in the world with 53 dogs.

“We have one of the most successful units. Last year, we had about 200 arrests and the dogs were responsible for 168 of those arrests. They are doing very well. I don’t think we would be able to do the job without the dogs,” De Beer said.

He said the unit buys dogs that are already trained because KNP does not have the manpower for training.