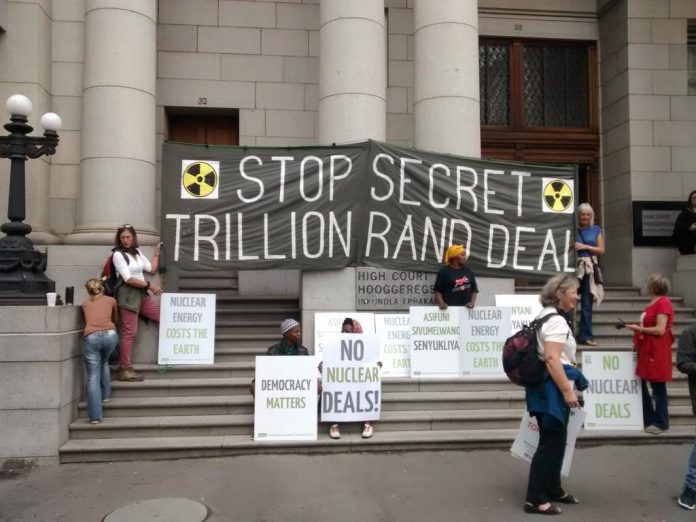 PRETORIA – The Minister of Energy has reacted to the Western Cape High Court’s ruling on South Africa’s controversial nuclear agreements today. The Court has set aside the agreements – signed by government with vendor countries – declaring them “unlawful and unconstitutional”. These deals were with Russia, the United States and South Korea.

The department reiterated that the South African government has not entered into any deal or signed any contract for the procurement of nuclear power.

“However, there are Inter-governmental Agreements (IGAs) signed between South Africa and the following countries: United States of America, South Korea, China, Russia, and France,” the department said.

The Minister will engage Parliament on the matter.

Both the DA and EFF called today’s ruling “a victory for all South Africans”.

He said: “We welcome this order as it will ensure much needed transparency over nuclear procurement going forward.”

The court argued that the necessary procurement processes and procedures were not completely followed. The following three points came out of the verdict:

The fight to block nuclear now returns to Parliament.

EFF spokesperson Mbuyiseni Quinton Ndlozi said the Court’s finding that the agreement between SA and Russia was “unconstitutional is a victory against kleptocracy and state capture by the Gupta family”.

He said: “On numerous occasions, the EFF has constantly reiterated that South Africa cannot afford the R1-trillion Nuclear deal…”

The EFF alleged, in a statement today, that “Nhlanhla Nene was removed as the Minister of Treasury in December 2015 because he had refused to comply with procuring the nuclear deal.

“His replacement with Van Rooyen was all in an attempt to have this deal passed. This is the same with the removal of Pravin Gordhan.

“Gigaba has also been brought as an unquestioning mind towards the nuclear deal. His only interest in being Finance Minister is taking selfies with his friends and has nothing to do with uplifting the economic status of our country.”

The EFF concluded: “It is yet another fundamental reason why Zuma must step down as the President of Republic; he has once more, presided over undermining the highest law in the land, all in pursuit of self-enrichment and corruption.”

South Africans will join together again tomorrow, Freedom Day, to march for Zuma to step down.