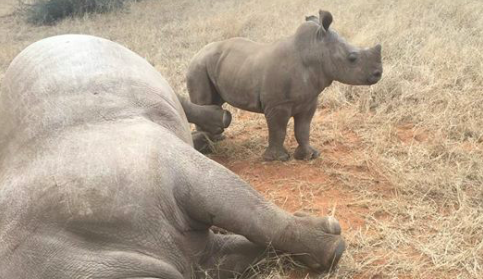 With just one photo and one sentence, farmer Pieter Els summed up the tragedy of the rhino poaching that has plagued South Africa these last few years.

In a post on Facebook yesterday he uploaded this heartbreaking photo of an orphaned rhino, looking lost alongside its dead mother… with only red blood visible where once the mother had a horn… hacked off by poachers, greedy for money from the Asian market where rhino horn is in demand in mainly Vietnam and China.

According to reports on social media, after Pieter discovered the one dead rhino and reported it, he went up in the police chopper to count the rest of his rhino… and tragically discovered another eight carcasses.

There have been reports of poaching in other parts of the country in the past 24 hours and apparently as many as 17 may have been killed around South Africa in the last 5 days. This is not confirmed.

Today, in response to advice that he should dehorn his remaining rhino, Pieter said he has sold them all.