Two videos have had South Africans on social media – and even mainstream media – “buzzing” this past week. Both are old and shared with incorrect information.

The ‘lion hunt’ was neither a canned hunt… nor even a lion hunt! It was a buffalo hunt that went wrong for the hunters. (You can view it here but please be warned, it is sensitive content.)

The hunt occurred two years ago near Bray in the North West, in which professional hunter Reinhard Heuser (then 34) was attacked by a male lion. Reinhard, who owns Kwalata Wilderness, had taken overseas clients to the Kalahari where they were tracking a buffalo when they stumbled upon the lion.

Jacques Spamer who assisted on the hunt, told Northern News at the time in March 2015, that they shot straight away but when it stormed Reinhard they couldn’t shoot again until both fell to the ground.

Reinhard suffered only flesh wounds, including a gash under his armpit and bite marks on his shoulder.

This video (see here) has also gone viral again during the first week of July 2017 – almost a year after the incident actually took place. The secret film – which was uploaded on 26 August 2016 – was made at Jeppe Boys’ High, Joburg’s oldest public school. According to a pupil from the school, the student who took the video was suspended for three days afterwards. Whilst the video showed a teacher behaving badly (screaming abusive language), many at the time said it also showed that teachers in South Africa were being pushed to the limit by students. 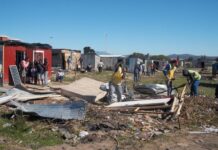 One Dead, 13 Due in Court After Protests and Looting in Bloekombos 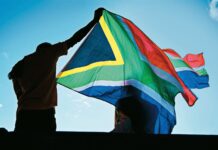 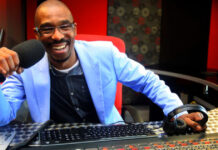