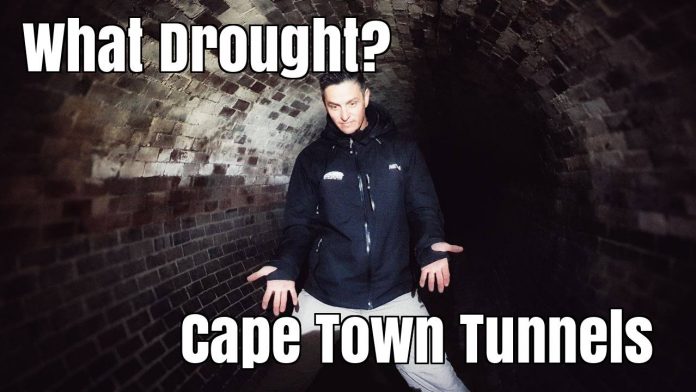 Adam Spires – who calls himself the “Wannabe Vlogger” on YouTube – has produced a video exploring Cape Town’s underground tunnels… revealing that the Mother City DOES have water… a LOT of water! But it’s going to waste, according to Adam…

In the first of a three part series, Adam accompanies Matt from Good Hope Adventures down into the tunnels. These began as canals, apparently built by homesick Dutch settlers after they arrived in South Africa in 1652, but later became tunnels, covered up because at the time they had become too polluted by residents.

The tunnels were forgotten about until 1901 when there was a massive explosion caused by welding in Adderley Street (and a build-up of gas in the tunnels).

Adam says “you’ll be shocked to find out just how much fresh water is under there!”

On the castle side of Table Mountain there are apparently up to 20 springs, pumping fresh water through the tunnels 24/7… about 2.5 million litres each per day… totally almost 7 billion litres per year. And all those billions of litres, which could be used for irrigation for instance, are being pumped out into the ocean and going to waste, says Adam…

The Capetonian blogger says his most important message is to get a question to local authorities: Why aren’t we using it? He asks that viewers keep sharing the video until we get an answer. UPDATE: The City of Cape Town has sent a response about the underground tunnels to SAPeople.

Watch: What Drought? Billions of Litres of Water Going to Waste from Cape Town’s Underground Tunnels

WATCH: Exploring the underground tunnels in Cape Town…you'll be shocked to find out just how much fresh water is under there! (Part 1/3) #savewater #watercrisisLIKE MY PAGE // TAG A FRIEND // SHARE THIS VIDEO Times LIVE Good Hope Adventures The Endangered Malpas